Ehud Olmert this week became Israel’s first former prime minister to head to prison. Here is a simple explanation of why, what legal troubles still await him, and the crimes for which he’ll never pay. 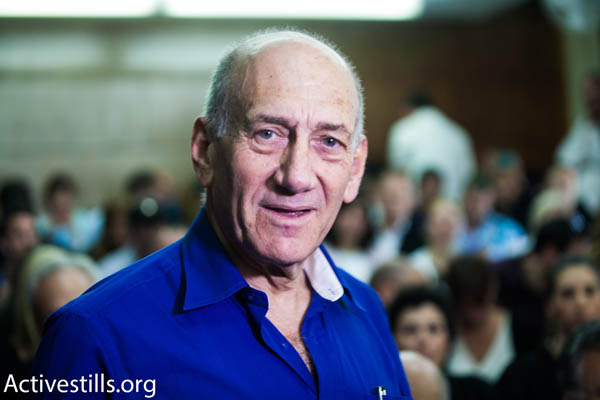 Former Israeli Prime Minister Ehud Olmert is going to jail — albeit only for 18 months. The Supreme Court shortened Olmert’s six sentence in a long-awaited appeal this week. The sentence was for a bribery conviction in a scandal referred to in the Israeli media as Holyland Affair. But that is far from the end of the plentiful legal sagas that forced the sitting prime minister to resign.

Olmert also has another appeal pending, against another conviction over another scandal, the Talansky Affair. The State, meanwhile, is appealing Olmert’s acquittal in a third trial, the Rishontours Affair, and a partial acquittal in a fourth, the Investment Center Affair.

Israel Police’s bribery unit, meanwhile is pressing for charges to be brought against the former prime minister for obstruction of justice, for alleged witness tampering, which would start — quite remarkably — a fifth legal entanglement.

Although Olmert’s criminal trials only began after his forced resignation, the actions for which he is answering began long before he ever took the reins of Israel’s government.

What it’s all about

The Investment Center Affair concerns Olmert’s tenure as minister of trade and infrastructure, when he allegedly intervened in the decisions of the ministry’s investment center to benefit projects submitted by his former law firm partner, Uri Messer.

The Talansky Affair concerns envelopes stuffed with cash, sent by businessman Moshe Talansky and delivered by intermediaries to Olmert the latter was mayor of Jerusalem (1993-2003) and minister of trade and infrastructure (2003-2006). The state claims Olmert pocketed the money; Olmert maintains it was campaign funds not used for personal gain.

The Rishontours Affair concerns Olmert using state funds to buy flight tickets for himself and his family on private trips abroad. Rishontours was the travel agency through which the flights were booked.

Finally, the Holyland Affair concerns bribery on a massive scale. Both Olmert and his successor as mayor of Jerusalem, Uri Lapoliansky, were convicted of accepting bribes in order to rush through permits and planning processes for an outlandishly grandiose residential complex on a Jerusalem hilltop — against the strong opposition of residents and ecologists. Olmert’s bribes alone, it was alleged, amounted to millions upon millions of Israeli shekels, and the sums exchanged in the entire affair ran up to millions of dollars.

Olmert’s conviction in the Holyland Affair, which came in March 2014, rested heavily on the testimony of a state witness. The witness, Shmuel Dechner, was a flamboyant former chemist, manager and investor with a trail of debts in both Israel and the UK. He was allegedly hired by Holyland’s main stake holder, Hillel Cherny, to secure the requisite permissions. When Cherny failed to pay Dechner his fees, the latter turned on him, filing a civil lawsuit and offering his services as a state witness.

Specifically, Dechner accused Olmert of accepting half a million shekels (some $128,200) in bribes via his brother, lawyer Yossi Olmert. Dechner also accused Olmert of suggesting he give money to the municipal engineer, Uri Sheetrit. Lastly, Dechner testified that Olmert’s longtime secretary and enforcer Shula Zaken asked him to sponsor a public opinion poll. The former prime minister was convicted in this affair based largely on the first accusation of the three, and acquitted on the other two.

Zaken herself was convicted of accepting vast bribes from Dechner, but later turned state’s witness herself. The obstruction of justice accusation concerns Olmert’s alleged attempts to dissuade Zaken from testifying against him.

Dechner died of a heart attack in the middle of the trial, before he could be cross-examined by Olmert’s lawyers, which is the main reason we even know his name today. (Dechner was identified in the media solely as “S” throughout the entire trial until his death, at which point the court allowed his real name to be used.) But his credibility was destroyed over the course of the trial, shining a spotlight not only on his rather sordid business record but an almost pathological history of lying.

This particular case at this particular stage turns on the question of whether Olmert knew that Dechner was giving money to his brother, Yossi. The Jerusalem District Court maintained that he did. The Supreme Court agreed that this was a reasonable assumption to make: after all, Dechner was courting favor with Olmert and had nothing else to gain from lavishing gifts on his younger brother. But crucially, the court surmised, that assumption did not amount to proof, and thus does not withstand the test of reasonable doubt. Thus, the Supreme Court threw out Olmert’s conviction on the central charge, and upheld only a lesser one, of accepting bribes to the tune of NIS 60,000.

After the Supreme Court’s ruling in the appeal was announced earlier this week, a jubilant Edud Olmert tried presenting it as an acquittal. Furthermore, he told reporters outside the courtroom that he never took any bribes at all. Neither of those statements are true, of course. Olmert remains the only Israeli prime minister to be convicted in a criminal court, and bribery is bribery — strictly speaking, 60,000 is just as abhorrent as 60 million.

With other trials and appeals still under way, Olmert’s extraordinarily lenient jail sentence may still have a few years tacked on to it from the other trials, and his political career is, at any rate, long over. He is legally barred from holding public office for at least seven years, which considering his age makes a comeback highly unlikely.

There is still the possibility of a pardon by President Reuven Rivlin (unlikely, considering the president’s stated abhorrence of corruption) or a reduction to time served on compassionate grounds if Olmert’s pancreatic cancer was to relapse.

The most slippery beast

On the surface, this should send out a strong message about accountability and corruption, possibly even propping up Israel’s slipping international rating on that front. After all, the most powerful man in the state was dragged down from his post and is now going to spend at least some time in prison — even if the actual time served is brief, the symbolic importance is immense.

But what stands out far more is the degree to which a sly, wealthy and powerful man was able to evade justice for so long. Even if he is convicted on the remaining charges, Olmert has already spent more time in interrogation rooms and in the dock — all the while remaining free to travel in Israel and abroad — than he will ever spend in prison.

The role of Olmert’s eminence in the tortuous process of his trial was underscored by a pure coincidence — a similar yet diametrically opposite ruling in the same court just days earlier.

Last week, the Supreme Court cited “intuition” in rejecting an appeal by Roman Zadorov, an immigrant convicted of murdering a schoolgirl in 2006, despite a wealth of forensic evidence pointing at his innocence and consistent reports of a police cover-up.

Just a week later, a conviction that leaned on that same feeling, “intuition,” was thrown out in order to exonerate a former prime minister. As Zadorov’s lawyer Avigdor Feldman lamented after the Supreme Court’s ruling in the Olmert case, reasonable doubt is the most slippery beast of criminal law, and it tends to favor wealthy politicians over impoverished immigrants.

The same, alas, can be said of the silent witnesses to Olmert’s trials — the hundreds of Palestinians, Lebanese and Israelis killed on his watch as prime minister.

That is perhaps the most bitter subtext of the entire saga. The man who bears direct executive responsibility for the killing of Lebanese civilians in the Second Lebanon War, Palestinian civilians in Operation Cast Lead, and the loss of over 100 Israeli soldiers in Israel’s worst-managed war ever, is going to jail. But he is not likely to ever be put on trial for even a single life sacrificed to his unparalleled, vicious incompetence as a prime minister.

After six years of legal wrangling, the Israeli Supreme Court doled out a small crumb of justice this week. But true criminal justice, as well as historical justice, is years, if not decades, away for Israel’s 12th prime minister.

emailemail
Before you go…
A lot of work goes into creating articles like the one you just read. +972 Magazine is nonprofit journalism, owned by many of our writers, editors, and journalists. In order to safeguard that independent voice, we are proud to count you, our readers, as our most important supporters. With your support, we can keep +972 Magazine a strong, independent, and sustainable force helping push the global discourse on Israel/Palestine.
DONATE
More About corruption 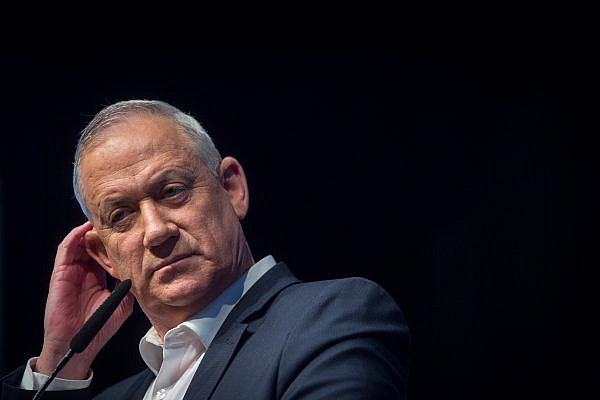 Israel’s opposition campaigned on democracy. Netanyahu won on Zionism.
Blue and White thought Israeli voters would opt for a copy of Likud without the corruption. It lost that bet three elections in a row.
By Yousef Munayyer March 3, 2020 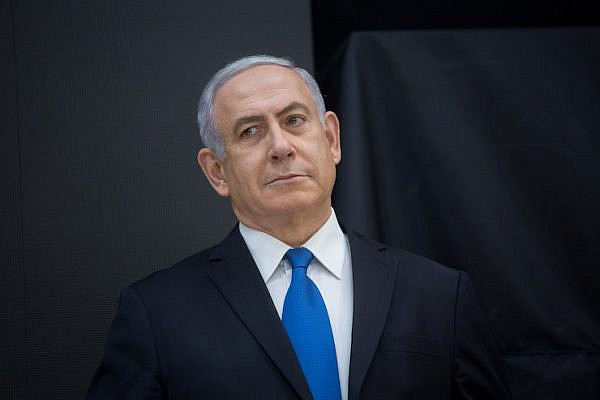 Netanyahu’s entitlement is a product of Israel’s social hierarchy
A democracy would ensure that a prime minister charged with corruption should step down. But under Israel’s ethnic and class-based regime, what he did is less important than who he is.
By Shoshana Gabay December 1, 2019