Israel’s military assaults consistently fail to shift the balance of moral power in its war on the Palestinians. 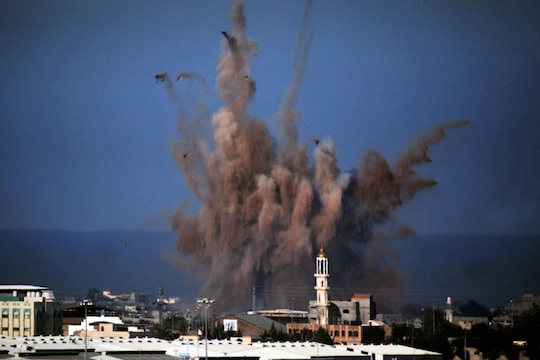 On the heels of a military campaign that failed at its only stated objective — to rescue three kidnapped Jewish teens — and instead yielded near-unanimous international condemnation and government-fueled racial attacks, Israeli Prime Minister Benjamin Netanyahu has gone all-in on a bet that more violence will somehow reclaim his losses. As others have pointed out, Netanyahu’s gamble has come at the expense of the truth, but it is also costing the lives of more innocents, all of them so far Palestinian.

Let’s set aside for a moment how we got here and instead consider the effectiveness of Israel’s tactics to date. In Gaza, last night’s bombing began just after 1 a.m local time, and by daybreak, Israel had “targeted” 50 sites in 65 airstrikes. By 11 a.m., with rockets still flying defiantly from the coastal strip, the Israeli prime minister had instructed his air force to “take the gloves off,” and within three hours, the number of airstrikes had reportedly risen to 90 — or nearly one every five minutes.

Unlike the “homemade or smuggled rockets” at Palestinian fighters’ disposal, Israel’s payload includes GPS-guided weaponry designed to single out “pixel-sized targets.” Among these, for example, was the 67-year-old founder of Hamas, Sheikh Ahmad Yassin, who was assassinated by air (in his wheelchair) on March 22, 2004. But if the latest Israeli campaign was aimed at Hamas and other armed groups in Gaza, you wouldn’t know it from eyewitness accounts on the ground there.

As with the Israeli military’s rampage throughout the West Bank these past weeks, which Human Rights Watch and others have labeled collective punishment, the attacks on Gaza have not focused on “military targets.” As of this writing, Gaza’s Tweeps have reported repeated airstrikes against mosques, homes, and refugee camps, and the most recent reports give a tally of 14 Palestinians killed in fewer than 24 hours, including at least two children. Given Israel’s sophisticated weapons systems, one has to assume that these “targets” were specifically selected by military planners to make good on the Israeli premier’s call to escalate attacks.

And therein lies the brutal calculus of Israel’s strategists: to “take the gloves off,” they visit violence, not against a handful of alleged kidnappers in the West Bank or rocket launchers in Gaza, but against a civilian population that has neither an army to protect it nor an avenue of escape. That the majority of Gaza’s civilians are already refugees from villages violently “cleansed” or destroyed by Israel in 1948 should offer some insight into the bankruptcy of this approach. More than six decades on, Palestine’s indigenous inhabitants remain on the land, and despite Israel’s attempts to demonize them as “terrorists” or recalcitrants, they continue to resist longstanding policies to silence them.

In Gaza, those policies have included a suffocating siege by land and sea — one that patrols, at gunpoint, nearly half of the strip’s arable land and some 85 percent of its coastal waters. In the West Bank, Israel maintains daily control of more than 60 percent of the land there, in the territory labeled “Area C.” In all cases, though, Israel — as it has demonstrated in the last weeks — can attack Palestinians at will, anyplace and anytime.

As the usual chorus of Western critics justifies these attacks by condemning Hamas rockets and “rioting” in the West Bank, they might take heed of a question posed this morning by Palestine Center Executive Director Yousef Munayyer, who asks:

Do those against indiscriminate projectiles from Gaza support givin them precision weapons or just want them to shut up & accept oppression?

The question would be wasted on Israeli lawmakers, of course, who this morning approved the call up of 40,000 reservists, presumably for a pending ground invasion against Gaza. The last time that happened, in January of 2009, it capped an Israeli offensive that claimed up to 1,417 Palestinian lives — and those of 13 Israelis. That “kill ratio” — to borrow a nauseating military term — exceeded 100 to one. But if the current Israeli onslaught is any indication, it did nothing to shift the balance of moral power in Israel’s war on the Palestinians. Like those before him, Netanyahu, too, will lose this war.