Compulsory military service for yeshiva students is a popular issue for secular politicians. But Shas and other Orthodox parties will continue to get their way on this issue, partly because of Israel’s fragmented electoral system, but also largely because Zionism depends on the haredim for its raison d’être.

By Steven A. Cook

Washington — Last week the Israeli media reported that Shas spiritual leader, Rabbi Ovadia Yosef, suffered a minor stroke. Although his doctors were mum on what might have caused the episode, sources close to Yosef indicated that a contributing factor was the rabbi’s fear of a renewed push among secular Israelis for yeshiva students to be drafted into the Israel Defense Forces (IDF) after the January 22 election.  Yosef is so consumed with this issue that five days before he was hospitalized, the rabbi suggested that Haredim youth emigrate rather than serve in the military.  It seems that Rabbi Yosef’s concerns are real and quite clearly run deep, but he should not worry so much.  It is unlikely that Israel’s budding Talmudic scholars will be picking up Galil rifles anytime soon.

Although compulsory military service for yeshiva students is popular among Israelis and thus a good issue for secular politicians, Shas and other Orthodox parties will continue to get their way on conscription and a variety of other issues. That is the way it has been and likely the way it will continue to be.  A good part of the explanation for this has to do with Israel’s electoral system, which can best be described as “disproportionate representation,” but there is something else going on that is at the heart of the Zionist project that gives the Haredim and other prominent religious voices far more sway than most Israelis prefer.  Setting aside the gauzy images of secular sabras tilling fields, Paul Newman in Exodus, and more contemporary high-tech entrepreneurs who got their start in Unit 8200, the army’s intelligence unit, Israel is dependent on the Haredim.  Not financially, of course, but without the likes of Yosef, other ultra-Orthodox rabbis and their followers, secular Israelis have no better claim to the land between the Jordan River and the Mediterranean Sea than the Palestinians do.

In January 1994 when Yitzhak Rabin addressed the Knesset in the wake of Baruch Goldstein’s massacre of Palestinians in Hebron, he told Israeli lawmakers that the Bible was an “antiquated land registry.” Rabin was not only sharply rebuking the warped religious fervor of Goldstein and his ilk, but he was also stating clearly that the modern Jewish state could not and should not be based on the contours of the ancient one.  The Jerusalem-born Rabin, who was Israel’s first sabra prime minister and a war hero, had his Zionism wrong, however.  It is true as political scientist Shlomo Avineri explains in his volume The Making of Modern Zionism that early Zionist intellectuals “substituted a secular self-identity of the Jews as a nation for the traditional and Orthodox self-identity in religious terms.”  Yet even as successful as Zionism was in this transformation — Avineri calls it a “revolution in Jewish life” — the fact remains that this success was based on an historic link to the Land of Israel.  Even if there are important ethnic, nationalist, and cultural factors that bind Jews to the area, that connection is intrinsically a religious one.

Much of the Jewish population that made its way from Europe to Palestine may have been secular in outlook and regarded Zionism as a movement of national liberation, but bound up in their search for identity was their religion and literally the land from which it emerged.  The “ingathering of exiles” could not have happened on the Mau Plateau as the British government proposed in 1903 because it would have meant that, despite the establishment of Israel in what was part of British Uganda, Jews would have remained in exile.  Members of the World Zionist Congress at the time voted down the proposal for precisely this reason.  They understood that the success of Zionism hinged on a Biblical connection to the land of their Jewish forefathers.

Against this backdrop, the official patronage that allows vast numbers of young men to do nothing but study Torah serves a critically important purpose.  If the IDF, with its large numbers of tanks, fighter planes, and undeclared nuclear forces is the obvious manifestation of Israel’s national defense so too is the army of yeshiva students who — by the very act of studying Torah in the Land of Israel — reaffirm the specifically Jewish connection to the area, which includes the West Bank and, in particular, the areas of Jerusalem that Palestinians claim to be their own.  Armed with centuries of rabbinic commentary and history that establishes Israel as the cradle of Judaism allows Zionists to incorporate biblical stories of exile and redemption into a modern nationalist narrative.  To paraphrase the late Yitzhak Shamir, “It’s our land, why should we give any of it up?” That sense of ownership is not only a fact of modern Israel’s existence and its occupation of the West Bank, but also Jewish history.

Conventional commentary on Zionism often refers to a tension between the secular and religious in the pursuit of national liberation, yet tension suggests an inherent conflict when in fact the pursuit of Zionist goals fundamentally needs Judaism and religious Jews for the legitimacy of the entire project. Why else would successive Israeli governments — of left and right — permit the establishment of yeshivot Palestinian parts of Jerusalem or establish settlements in the West Bank? And, how are these acts justified? Biblically. Zionism depends on the Bible to act as a land register.

Under these circumstances, the shift in Israeli politics is not all that surprising.  Over time, the exigency of ensuring that the existence of Israel is based firmly on religious grounds and establishing—beyond a shadow of a doubt—the Jewish connection to the land has made it possible for a new political elite to emerge.  These politicians, army officers, judges, and senior bureaucrats may not come from the Haredim (many of whom are not Zionists) and the ultra-Orthodox community, but the fact that the state has been solicitous toward the ultra-Orthodox has helped them advance an uncompromising agenda on the major policy issue confronting Israel: the disposition of the West Bank.  It is true that Rabbi Ovadia Yosef has at times signaled his willingness—in qualified terms—to consider an Israeli withdrawal from the West Bank, but Yosef’s position at any given moment is not as important as the overall religious symbolism of the Tomb of Joseph (Nablus) or the Cave of Machpelah (Hebron) or the many other Jewish holy sites that dot the landscape in areas that Palestinians call home. There may be good strategic reasons not to withdraw from the West Bank, but those security problems exist in the realm of the practical in which one can at least imagine a resolution.  The real issue is metaphysical: An Israeli government cannot forfeit these places if Israel’s reason to exist is a homeland for Jews in the land of their forefathers.  What, after all, does Tel Aviv have to do with Judaism?

Annexation of the West Bank is not new in Israeli discourse, but it has now crept into the mainstream thanks to parties like Yisrael Beitenu (Israel Our Home) and Habayit Hayehudi (Jewish Home). These are not Haredi parties, but the state’s patronage of the ultra-Orthodox so that it can establish a superior claim to the land than Palestinians provide opportunity for political entrepreneurs like Avigdor Lieberman and Naftali Bennett to advance their aims of normalizing Israel’s presence in the West Bank. This election is unlikely to accomplish this goal, but the trajectory of Israeli politics is abundantly clear.  The central irony is, of course, that to politicians like Bennett and Lieberman, the final achievement of the Zionist project — annexation of Judea and Samaria — will only be possible with the religious cover of the Haredim and ultra-Orthodox.

Steven A. Cook is Hasib J. Sabbagh senior fellow for Middle Eastern studies at the Council on Foreign Relations.

BECOME A MEMBER
More About shas 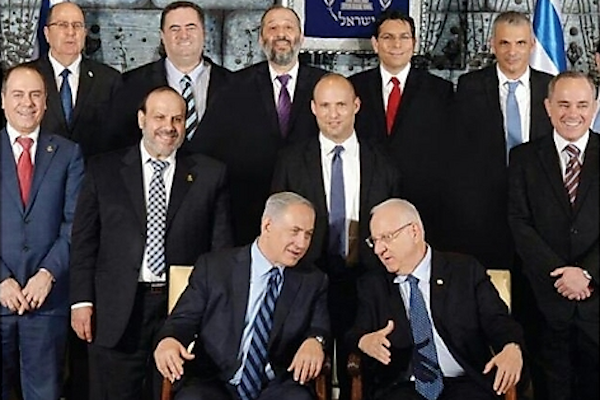 Ultra-Orthodox paper photoshops women out of gov’t portrait
Yom-LeYom, the official weekly of the Shas party, published the traditional group portrait of the cabinet and the president this morning — with one notable amendment: Ministers Miri Regev (Culture), Ayelet Shaked (Justice) and Gila Gamliel (Immigrant Absorption and, you guessed it, Gender Equality) were all airbrushed out. Here is the original: And here is…
By Dimi Reider May 21, 2015 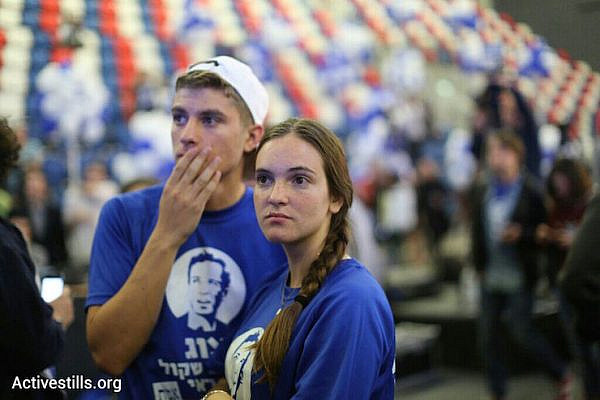 Beyond Netanyahu: On the collapse of the so-called Left
Many in the Israeli Left saw the recent election defeat as a danger to democracy. But if the Left wants to win elections, it needs to let go of its anti-Mizrahi fear-mongering and racism. by Elad Ben Elul (translated by Joshua Tartakovsky) In order to understand the outcome of the recent elections in Israel, one…
By Haokets March 27, 2015