Distracted by the ‘fire intifada’ that wasn’t and the progress of the ‘muezzin law,’ the Israeli Left and several Palestinian Knesset members failed to call out the other injustices of the last few weeks. 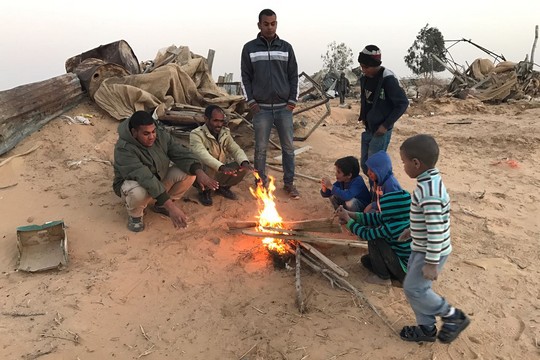 Residents of Bir Hadaj warm themselves around a fire after homes in the village were demolished. (Rami Younis)

It’s easy to condemn the declarations that the recent wave of fires across Israel brought from Israel’s igniter — sorry, inciter-in-chief Benjamin Netanyahu, its lacking-in-culture minister and its minister of uneducation, who all claimed that a “fire intifada” was afoot. And the Palestinians and the Israeli Left did indeed condemn them. We all condemned them. But what comes next?

To tell the truth, I avoided the local news throughout the week that the fires were burning here in Israel, in favor of international news. The wardens of the only democracy on the planet were appearing in my Facebook and Twitter feeds, and I imagined that if I were to tune in to one of Israel’s propaganda channels, I would be faced with a grave and self-important presenter disseminating the lies being dished up by the top levels of the government/police/army.

Leave it, I told myself — I’m still trying to get over the sight of Arabs imitating the muezzin’s call on every website and in all corners of social media. It was a full week before I plucked up the courage to go near a news broadcast, and I was amazed to discover that the tales of the “fire intifada” I had heard from friends had all but vanished from the screen. I had somewhat hoped to get scientific explanations contradicting what I had seen in the Arabic and European press, about the climate change which had caused fires across the world. But that, too, was barely to be found.

Particularly sad, and serious, is that no Israeli media outlets — save for Local Call — provided their audience with a map showing the fires that were raging across the rest of the Middle East. Perhaps the Israeli media, enlisted to support the lies of the prime minister and his entourage, thinks that these fictional Arab terrorists simply said “screw everyone” and began setting fire to the entire Arab world. Okay, that last bit is partly true (see Assad, the Islamic State group, etc). But still.

As usual, it’s not just the media that failed to address the issue. The Israeli Left and Palestinian citizens of Israel, too, failed in the face of incitement. A Left that meekly accepts racist and inciting slander, without appealing to the international media, without calling for demonstrations and without demanding that Netanyahu, Miri Regev and Naftali Bennett be investigated for incitement, is not a true Left.

As per the customary cliché in this type of piece, the writer is supposed to ask their readers to “imagine the uproar there would be among left-wing organizations in Europe if a leader on the continent had said ‘x’ about Jews.” But I don’t want to tarnish the European Left with comparisons to the “left-wing” in Israel. Instead, let’s just say that this is another instance, like at the start of the 2014 Gaza massacre, in which the Right gets riled up and the Left responds just to ease its conscience a little. 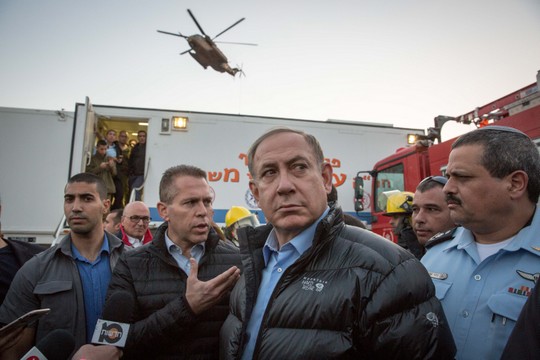 Meanwhile, part of the Palestinian public in Israel — and some of its leaders — have also failed to take on the spin in the recent “muezzin law” controversy. The government has put forward yet another populist, demagogic and unenforceable law, which will draw a lot of attention, while at the same time advancing a dangerous and far less exciting bill to legalize West Bank outposts — the “formalization law.” Legions of Arab political activists recorded the call to prayer and uploaded it to social media, as if receiving ‘likes’ is what’s needed to liberate Palestine. A number of Palestinian Knesset members also took part, exploiting the situation to put on a show of buffoonery and populist self-promotion, as when Ahmed Tibi tried to play a smartphone recording of the muezzin during a plenary session.

The Palestinian public is worthy of a little more seriousness from its leaders and political activists. Instead of trying to amass more ‘likes,’ politicians like Tibi should be calling out whatever spin is being cooked up vis-à-vis the formalization law, which is far from the spotlight but which will further deny Palestinians the right to use the land they own.

As far as both the storm over the fires and the muezzin law go, it’s not as if calls to investigate the upper echelons of the State of Israel will lead to any actual investigations. Nor will creating more noise over the formalization law hurt its chances of progressing. But the battle here is one of ideology against racism and exclusion, and Palestinians are racking up one defeat after another. It is also immensely important to know that those who are supposed to participate in this struggle (the Israeli Left) or lead it (Arab elected officials) are doing all they can in order to protect the rights of Palestinians.

There is, however, one fire Arabs lit in Israel last week that no one heard about. Amid the controversies over the “arson terror” and the muezzin law, four Palestinian homes in Lod were demolished. During the same period, a resident of Umm al-Hiran in the Negev was forced to tear down the homes and structures he owned following threats from the police, ahead of the planned evacuation and destruction of the village in order to build a Jewish settlement in its place. Dozens of Bedouin children in the Negev village of Bir Hadaj are sleeping in the freezing desert cold without a roof over their heads, because the state demolished their homes a fortnight ago.

So those children lit a fire in the desert in order to keep themselves warm. These are just a few real-life examples from the past few weeks of things that, somehow, remain less spoken of.