Israeli academic who fed the story to the press tells the ‘NY Times’ he wanted to undercut the Kremlin’s efforts to host Israeli-Palestinian peace talks. 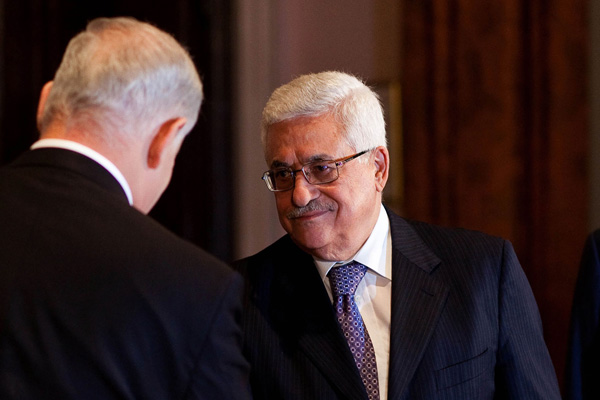 Israel’s Channel 1 News broadcast a story Wednesday night alleging that Palestinian President Mahmoud Abbas was a KGB agent in Damascus 33 years ago. The story, for obvious reasons, was picked up by local and international outlets within minutes of airing. (Watch the full Hebrew report here.)

In every good spy story, however, there’s always a hidden agenda to be uncovered. Or in this case, a not-so-hidden one.

Speaking in the Channel 1 report, the two Israeli academics who discovered the incriminating document and who fed the story to the press made sure the news item included some circumstantial icing on the cake — that Russia’s current Mideast envoy, the one currently trying to arrange a Netanyahu-Abbas meeting in Moscow, was stationed in Damascus at the same time as Abbas. The insinuated allegation: he was Abbas’ handler.

In a follow-up item in the New York Times, one of the academics, Gideon Remez, dropped all pretenses about the timing of the KGB story’s release, and his and his partner’s motivations.

The final paragraph of the Times story reads:

Mr. Remez said that they were not trying to undercut Mr. Abbas and, in fact, they favor talks with the Palestinians — but not under the auspices of the Russians, who should not be trusted. “It is not basically a good idea,” he said. “So that is why we thought this is the time to go public with this discovery.”

Their plan doesn’t seem to have worked.

Hours after the KGB story broke, the Russian Foreign Ministry announced that President Abbas and Prime Minister Netanyahu had agreed in principle to sit down together in Moscow, the first prospective working meeting in years.

Such plans had been talked about in the press for several weeks, with Abbas initially demanding a settlement freeze and the completion of a prisoner release Israel reneged on, which led to the collapse of last round of peace talks. The Israeli prime minister, for his part, dusted off his own precondition for talks, namely that there be no preconditions to the talks.

While nobody has any reasonable positive expectations for the outcome of the still-unconfirmed Kremlin rendezvous, it appears there are those who would rather not see it happen. The only question is whether these two Israeli historians were acting on their own.