It used to be that when Israel demolished Arab homes there would be a spontaneous strike and reactionary protest in some of the Arab cities. But there is a new political force leading Palestinian citizens of Israel, and this time, the protest is coming to Tel Aviv. 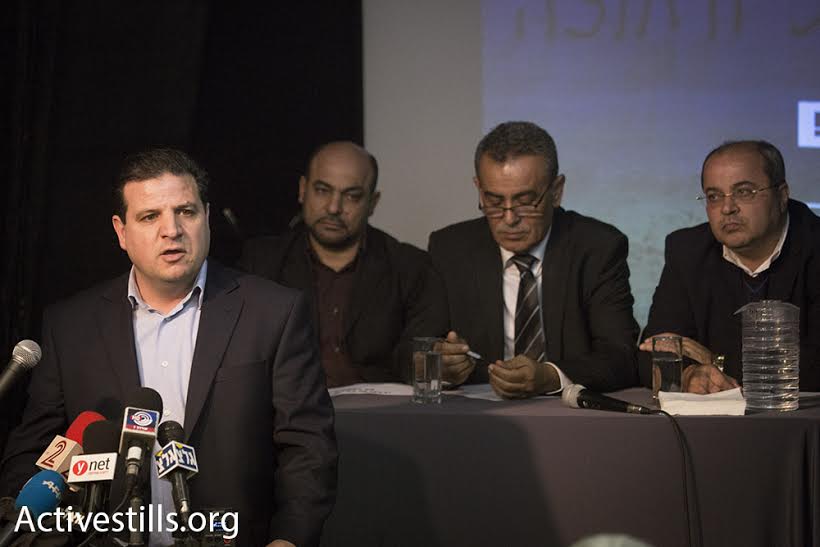 The average Israeli does not understand the dramatic changes taking place in their own back yard — in Arab society. Snippets of  information about Arab society’s agenda — house demolitions, a march here, a protest there — appear in the Hebrew media every once in a while, sparingly.

The way that the Arabs relate to the government is fairly predictable, it seems. For Jewish Israelis, the script probably seems to be the same. If something is going on with “the neighbors” — like land expropriation, the Prawer plan, a murder by the police, or even abhorrent statements by the prime minister on election day — the automatic Arab reaction will come on the streets, often spontaneous and angry. But most importantly, nobody will care — neither the government nor the media.

Lately, however, with the election of the Joint List and tremendous efforts to restructure the Higher Arab Monitoring Committee, there is a sense that Arab citizens are riding on a different wave. That change was evident in the message broadcast on the eve of elections, that Palestinian citizens of the state want to integrate on all levels and in all areas of life in the country — a revolutionary message in itself — and are determined to protect the weaker segments of society. That message is becoming a real plan of action on the ground today.

Let’s look at two of the small steps taken so far by the elected leadership of the Arab public: they rejected an offer to meet with the Arab League, a meeting that was its wet dream for decades, the dream of being given recognition and respect. Secondly they decided to allow MKs to respond in a number of ways when the national anthem is sung in the Knesset (to either stand quietly or to leave).

Those steps may seem small and symbolic, but they are far more. The establishment of a Knesset coexistence caucus, the rejection of immediate reactionary protests in response to home demolitions and setting an agreed-upon date for a general strike, in the middle of the week — these are all signs of a new direction in a new struggle by Palestinian Israelis. 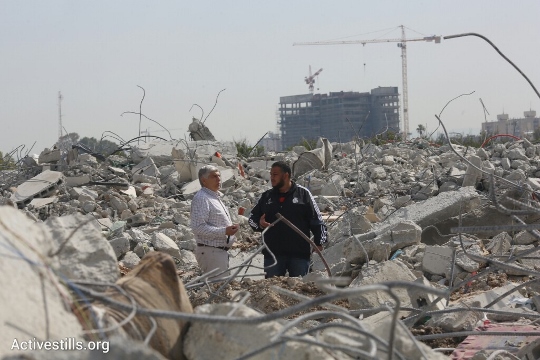 Residents walk through the remains of their homes in the unrecognized village Dahmash, central Israel, April 15, 2015. (Oren Ziv/Activestills.org)

Tuesday is expected to be a significant escalation of the message that Arab society is trying to send to the Jewish state. In the heart of the most Israeli city, Tel Aviv, and in the city square most symbolic for social struggles, Rabin Square, thousands of Arab citizens (I hope) will demonstrate at 5 p.m. The Arabs will come from Umm a-Fahm, Nazareth, Sakhnin, Rahat, Ramleh and Lod, from Taibe and Haifa and Beer Sheva, with signs in Arabic and in Hebrew, so that nobody can ignore them anymore. Their voice must be heard. The government’s policies of oppressing its Arab citizens must end, for everyone’s sake.

If you think about the slogans behind the rally, you will find that there is a clear declaration: we Arab citizens live here, we will not give up our rights, and we will never stop pursuing justice and equality.

But not only that: We are seeking partners for our struggle inside Israeli society. We are not ashamed, we are not complaining, we are not begging; we are here to protect those citizens who believe in democracy, which is in mortal danger, and we must cooperate with each other.

Palestinian society has undergone an evolution of sorts since the establishment of the State of Israel. It began with the generation that went through the trauma that followed the Nakba, the Palestinians who survived here (and who became Israelis against their will). The next generation is the defeated and frustrated generation, which grew up with those same parents who survived 1948, those who quietly took the citizenship, some of whom said thank you and kept their heads down. Then sprouted an angry generation. When you dig into the history, you discover that they are the victims of a split personality: Palestinian consciousness, Israeli on paper. This is the rebellious generation, those who don’t accept Israel and its actions, and what it has done and continues to do to the Palestinian people.

Today we see a generation of Palestinians creating a discourse in which Palestinian identity is cohesive, the sense of national belonging is unwavering, and which has a civic awareness that is super Israeli. The new Palestinian does not need to prove his loyalty to Palestine, because it is clear that the essence of the struggle for survival here is part of the struggle for defining ones own identity, and the right to the land on which we were born. On the other hand, he also doesn’t feel the need to test his relationship with Israel — he is a law-abiding citizen and knows how to work effectively from within the Israeli civil framework.

In this generation you will not find the same “good Arab” with whom you could eat hummus, who wouldn’t dare to say what he thinks, about whom Jews boast: “I have an Arab friend.” He is also not the same distant Arab who stays away from the Jews in order to maintain his identity. Full of confidence, this generation shows up on the Israeli doorstep and asks to come in, with no apologies and with no hesitation.

After 70 years you can no longer suspect the Palestinian citizen of Israel of being a traitor, even if the right wing wants to paint him as such, and to incite against him and to hate him. It is impossible to not see the new Palestinian in him — a Hebrew speaker, a hard worker. The educated Palestinian, the modern activist who talks about the right to proper education, to public transportation, to housing and the right to make a living — like any other citizen. And likewise, about the right of return and justice for his people. The most dangerous type of Arab is the one who looks like Ayman Odeh, because you can relate to him.

Herein lies one of the biggest problems facing the new Palestinian: what will be the reaction of Jewish Israelis? Will they be ready to tear down labels? Is Israeli society ready for an Arab with the scent of authentic Israeli chutzpah? What do you do with him? Do you oppress him? Do you clip his wings? Or do you push him into the corner and apply “moderate physical pressure” until he gives up on his desire to be a part of society?

If so, Israel will have an even bigger problem, and it will look like a fool in front of the whole world. On the other hand, the Arabs could despair at some point and simply stop trying, and that would be a dangerous development. As President Rivlin said a few weeks ago, “he who is scared of votes in the ballot box will get stones on the streets.”

Tuesday is a test for both sides. The Arabs are coming to Tel Aviv. We’ll see how many come and what message they bring with them. I will be there, of course.

On the other hand, it will be interesting to see how the Jews feel when they see us and how they respond. Will the evening dog-walkers stop for a moment to read a sign? Will we succeed at making them relate to our struggle for democracy and humanity, or at least to spark their interest into what’s taking place in their back yard? I want to believe the answer is yes.

What is certain is that we Arabs don’t have much to lose; worst comes to worst we can handle a little more alienation and racism. We will wrap up the protest, stop in Jaffa to eat something, and return home. And you will be able to say is this: The Arabs were in Tel Aviv; and now the Arabs are gone.