The answer is not in the government – which would deepen inequality and won’t be willing or able to end the occupation – but in the unusual alliances that could be formed in the opposition. 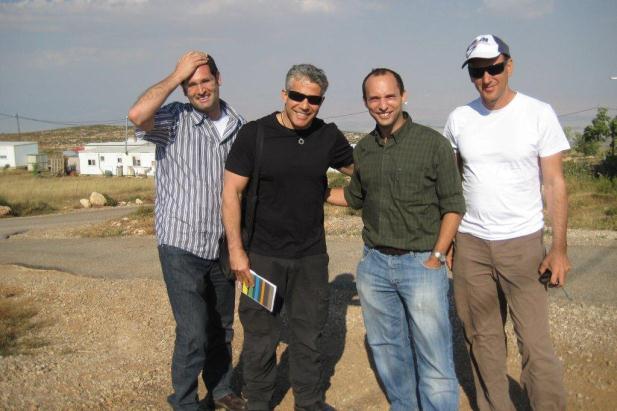 Yair Lapid (second from the left) and Naftali Bennett (to his left) at the West Bank outpost Kida. A new alliance between the settlers and the Israeli center. (photo: Yesha Council)

Benjamin Netanyahu has until the end of next week to introduce his new government. All indications show that it will likely include Yair Lapid’s Yesh Atid party (19 seats), Naftali Bennett’s Jewish Home (the settler’s party, with 12 seats), Kadima (2) and perhaps Tzipi Livni (6). Avigdor Lieberman’s Yisrael Beitenu is already part of the Likud, so it will also be in the coalition, which will include 64 or 70 of the 120 Knesset members, depending on whether Livni will be included. For the first time since the second Sharon government, the ultra-Orthodox parties Shas and United Torah Judaism will be left out (I estimated a month ago that this is the most likely outcome of the elections).

This would be a terrible government, which won’t be willing nor able to pursue any meaningful action on the Palestinian issue, let alone end the occupation, meaning that the world will need to apply a lot of pressure to allow any improvements vis-a-vis the status quo. Instead, the government will seek to impose a military draft on the Orthodox and continue to isolate Palestinian citizens. But there is also hope in the latest political developments, which break some of the traditional coalitions that have shaped Israeli politics since the late 1970s.

Historically, the State of Israel has found ways to compensate low-income Jewish citizens based on their identity. The exemption of the ultra-Orthodox – the poorest Jews in Israel – from military service, which was accompanied by various subsidies to yeshiva students, is the most prominent example. Other benefits for Jews include preference in zoning plans (i.e. better access to land) or various compensations to military professionals (only Jews are drafted). The army is the single most important institution which has traditionally enabled the social mobilization Sepharadi Jews living away from the metropolitan centers.

All of these aforementioned elements make it in the interest of low-income Jews to keep the state very Zionist and very Jewish – i.e. one which gives more resources and better services to Jews. Low-income Jews are the most right wing in Israel because the right offers them material and cultural compensations that have to do with their Jewish identity. Those often go hand in hand with the occupation and the disfranchisement of the Palestinian population, like in the case of the ultra-Orthodox cities built in the West Bank. In exchange for cheap housing, 100,000 ultra-Orthodox Israelis became settlers.

Some of these arrangements seem to have run their course. If the ultra-Orthodox are drafted or if they cease to receive special payments from the state (that latter is most important) in the long run some of them are less likely to support right-wing, Jewish-only policies. The pact between Lapid and Bennett already made the ultra-Orthodox parties threaten to support the immediate evacuation of settlement outposts. For now, these are empty declarations, but if the state was really to change all the arrangements with the ultra-Orthodox parties, major things could happen.

In other words: Lapid and Bennett, as well as their spoiled voters, hope that by forcing the ultra-Orthodox to serve in the army, cutting their social benefits and interfering with their separate education system, they will make them more Zionist. But the ultra-Orthodox were already loyal members of the Zionist order, and taking away those benefits could dramatically change their political behavior.

A left-Haredi opposition will be less effective in the short run, but in the long run it represents some real opportunities for change.

The smarter people on the right understand that, and they have been warning the settlers that the new coalition is a dangerous game. Danny Dayan, the head of the Yesha Council, even resigned from his position before the election and has since been attacking Bennett every other day. I think Dayan is one of the most sophisticated leaders that the settlers ever had; they made a serious mistake in letting him go.

This all sounds very abstract, but there are cracks in the coalition that brought the right to power. Whether they will lead to a real transformation of the system is anybody’s guess.

Related:
What will the third Netanyahu government look like, and how will it deal with the Palestinian issue?
The ethnic vote and the ‘white coalition’: 7 takeaways from Israel’s elections