While prospects for a negotiated end to the Israeli blockade of Gaza remain bleak, making use of the existing sea passage to Gaza could offer a way forward for all parties, including Egypt.

As negotiations to end the bloodshed in Gaza continue in Cairo, the United Nations Relief and Works Agency (UNRWA) said today that some 65,000 homes had been destroyed by Israeli bombing, leaving more than a quarter of the Gazan population seeking shelter – half of them at UNRWA schools. Aid organizations say the recovery effort will take years and, even then, only if Gaza has unfettered access to the construction materials it needs to rebuild.

Getting there hinges, in part, on whether Israel will allow the free movement of goods through existing land crossings into Gaza. But Palestinian negotiators have insisted that those entry points are insufficient and have called for Israel to relinquish its control over another key passage – the Mediterranean coast. 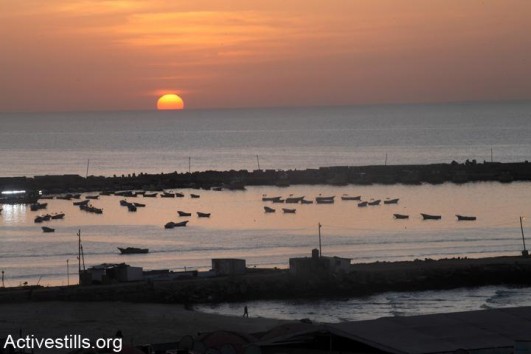 In a brief televised statement issued hours before the recent three-day ceasefire expired, Hamas military wing spokesperson Abu Obeida referred three times to the Gaza port, urging Palestinian negotiators to push for a lifting of the Israeli sea blockade. His emphasis could suggest an opening for the so-far stalled indirect talks in Cairo, which aim to broker a long-term truce between the two sides.

Although details of the talks have been sparse, Palestinian negotiators have said they stand behind Hamas demands to end the now eight-year land, sea and air blockade of Gaza. Broadly speaking, these demands fall into two categories: the “free flow” of people and the right to import and export goods. On the former, Israel has offered to be “more flexible” with permits for the Erez crossing, the only civilian access point between Gaza and the West Bank. On the latter, reports indicate that Israel has categorically refused to accept a recommissioning of the Gaza air and sea ports.

At the same time, Israeli negotiators have reportedly shown some flexibility on the issue of importing cement to Gaza – a demand that Israel has said could be met with “international control and supervision.” The European Union Border Assistance Mission in Rafah, or EUBAM, has such a mandate but has been inactive since June 2007, “due to the Hamas takeover of the Gaza Strip.” But as part of the Cairo talks, three of its main sponsors – Germany, France and Britain – have reportedly proposed reactivating the Mission, which was formed as part of the November 2005 Agreement on Movement and Access.

That agreement, which was inked following Israel’s unilateral withdrawal from Gaza in August 2005, stipulated construction of a Gaza seaport. To date, however, the port remains capable of serving only small fishing boats and Palestinian maritime police vessels. In all cases, Israel has largely restricted these vessels’ movement to three nautical miles, despite an agreement to extend access to 20 nautical miles, or roughly 37 kilometers. 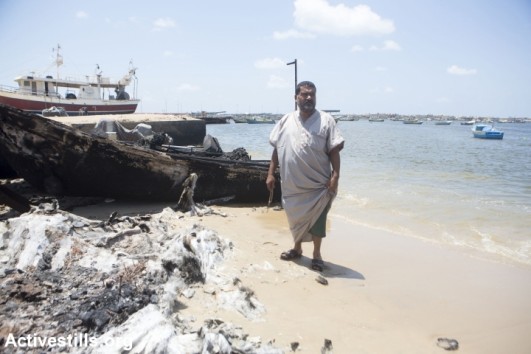 Sabri Baker, 53, a fisherman and father of 16 children, walks towards his destroyed boat in Gaza harbor, July 15, 2014. In 2012 his previous boat was confiscated by the Israeli army and was never returned. The boat was destroyed during an Israeli attack on July 11, 2014 (photo: Anne Paq/Activestills.org)

Could international oversight enable full Palestinian access to Gaza’s territorial waters? As it stands, EUBAM is tasked only with overseeing the Rafah crossing, but its mandate also includes “Palestinian capacity building in all aspects of border control,” including at the Kerem Shalom crossing. That crossing is designed exclusively for the passage of goods, and includes sophisticated scanning equipment to ensure that no “unauthorized” cargo enters Gaza.

Although Palestinian negotiators have objected to Israel’s list of so-called dual use items, it may be possible to revise that list as part of the Cairo talks. By extension, mechanisms for monitoring the entry and exit of goods could be applied to an expanded seaport – also under the supervision of an international body like EUBAM.

Setting aside the technical challenges of building such a seaport and monitoring mechanism – challenges that would require expertise beyond that currently available to EUBAM – forging a compromise on this Hamas demand might be less complicated than it seems. For one thing, incoming goods could be inspected at their points of origin and in accordance with international maritime laws. More important, perhaps, Israeli officials have themselves pointed to the port as a way to facilitate Gaza commerce.

A 2011 plan endorsed by then Israeli Transport Minister Israel Katz would have built “an island” off the coast of Gaza to include both air and sea ports. Israel’s motives at the time, according to Katz, were “to break all ties with Gaza while maintaining [Israel’s] control over maritime security.” Although Hamas is unlikely to accede to Israeli oversight at the port, viewing it as a continuation of the Gaza blockade by other means, an international mechanism similar to EUBAM could be acceptable to both parties.

While prospects for a negotiated end to the blockade remain bleak, making use of the existing sea passage to Gaza could offer a way forward for all parties – including Egypt, which has effectively frozen all land passage through its border at Rafah. As the talks continue, one thing remains clear: The Palestinians of Gaza are loathe to return to the status quo. With so many of them displaced and their homes destroyed, their determination to end the siege is as much about national aspiration as it is about survival.