As violence against Israeli Jews declines, the Israeli media has gone back to business as usual. Palestinian newspapers, on the other hand, are full of stories of death, arrests, and all-out war. 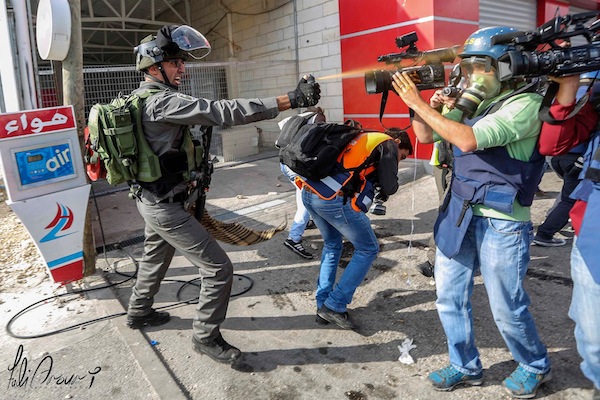 For the past several weeks, during what the Israeli press has deemed a “wave of terror,” included stabbings and extrajudicial killings in the streets, the Israeli media has accurately reflected the anxiety that has seized the public. In essence, that meant that as long as Jews were being stabbed the headlines screamed war. But the moment violence against the Jewish public receded, the Israeli media was quick to put this “episode” behind and make room for other issues — aside, of course, from momentary bouts of violence against Jews.

A quick glance at Haaretz’s website reveals what the media here was focused on, including the Russian plane crash in Sinai, the 20-year anniversary of Yitzhak Rabin’s assassination, Russia’s intervention in Syria, and the upcoming “Haaretz Conference on Peace.” The Palestinians have officially disappeared from the daily agenda, even in the “newspaper for thinking people.”

The situation on other sites is not much different: Ynet’s headlines include Russia-Syria, a bereaved mother who opposes returning the bodies of Palestinian attackers, and same-sex marriage. This alongside a report on a “terrorist who was killed while trying to stab a soldier,” reminding us that the “situation” vis-a-vis the Palestinians is interesting only when Jews are the victims of violence.

Although there are “incidents of violence” here and there (which are reported on only when they are directed at Jews), this all comes as part of the permanent state of war promised us by Prime Minister Netanyahu. The Israeli media gives the public a sense that everything is business as usual.

It is enough to glance at the home pages of some of the major Palestinian news outlets to understand just how big the gap is between the Israeli media’s mentality and that of the Palestinian media, which is clearly telling a story of a constant state of war. Even those who do not understand a single word of Arabic can see the enormous gap between the different realities Israeli Jews and Palestinians live in.

This, for example, is how the home page of Palestinian news outlet Ma’an looked just a few days ago: 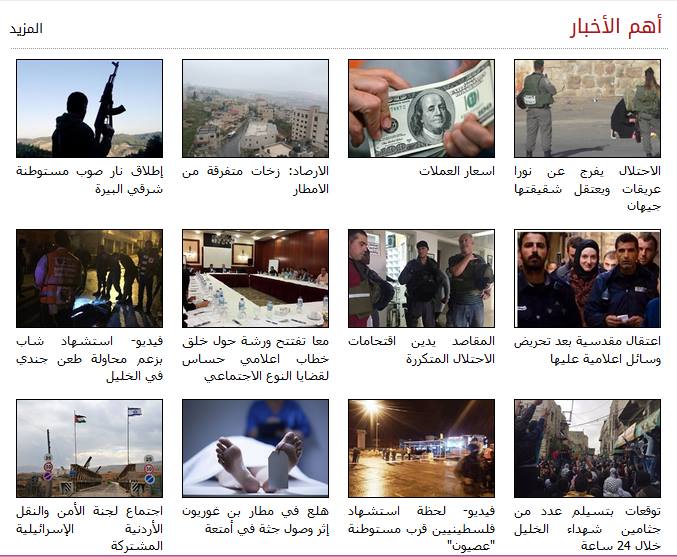 It includes reports on widespread arrests — including of young women — army raids and searches, shootings, killings, and Israel’s refusal to release bodies. That same day the Israeli media dealt with the effects of the latest storm, including widespread power outages, corruption scandals, and sports hightlights. It was hard to find any traces of the mini-war, which was quickly elevated to the status of “Third Intifada,” which had just taken place here weeks before.

A few days later, Ma’an reported on the difficult conditions of prisoners in Givon Prison; Jews who continue to go up to the Temple Mount; the wave of arrests in the East Jerusalem neighborhood of Sur Baher; the over 70 dead and 7,200 wounded during the month of October; and on the fact that the occupation has handed over the bodies of two people from Hebron over to their families: 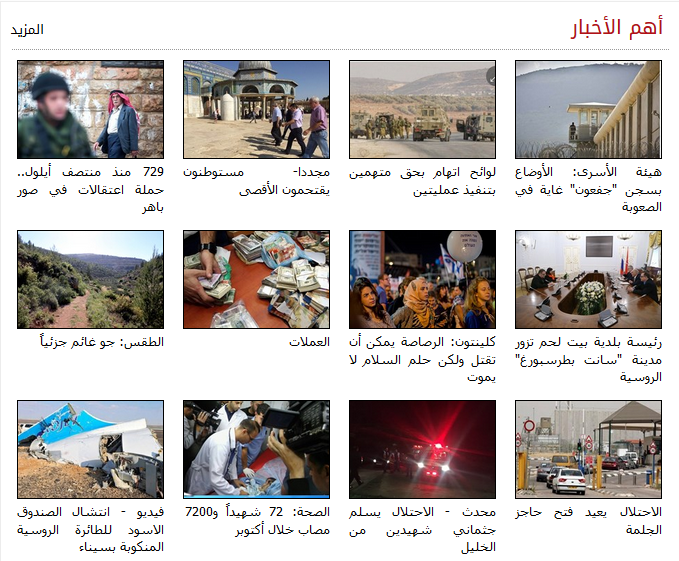 On the website of the Al-Quds daily, one can find reports on the 18 Palestinians killed in Jerusalem over the past month; on the detention of a young man by the Shin Bet; on the condemnation by the Palestinian Authority of arrests of Palestinian journalists; on the increased number of administrative detainees; and on the worsening conditions of Palestinian women prisoners in Sharon Prison:

Al-Hayat al-Jadida also reports on its home page on administrative detainees and the situation at Sharon Prison, as well as on the arrest of four Palestinians near Hebron, the arrest of four others from Beit Ommar, the transfer of two bodies to Hebron, and yes, the weather: 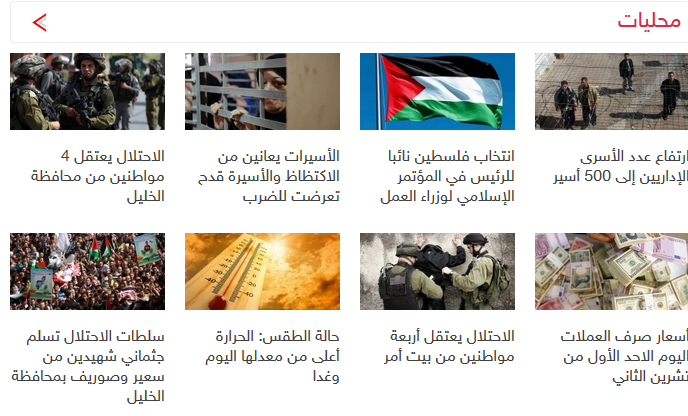 Al-Ayyam reports on the killing of an 18-year-old and the wounding of another Palestinian by Israeli fire at the Jalama checkpoint; on the wounding of four Palestinians from Hebron during clashes with soldiers; and on injuries and arrests in the Bethlehem area: 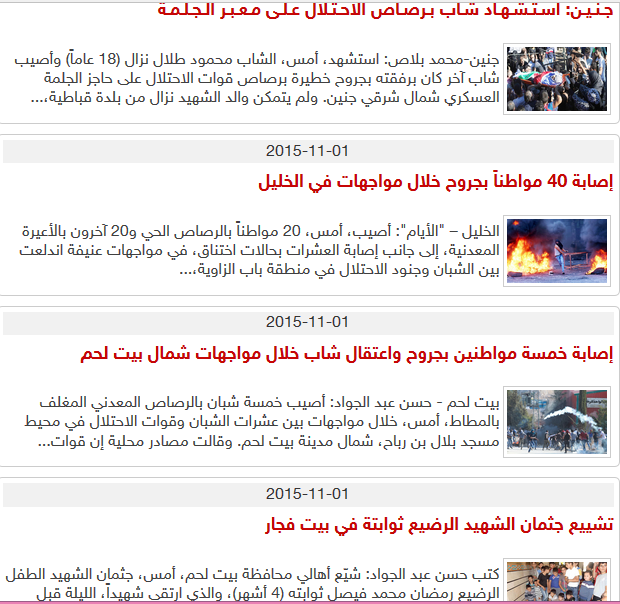 It should be obvious that none of us are interested in fear returning to the streets of Israel; none of us wants to go back to a state of wear. But the fact that the Israeli media chooses to tell us only one side of the story in a place where war is a constant, day-to-day reality, allows us to continue telling ourselves that we are the sole victims of senseless violence. We continue to believe that this kind of violence flares up without any explanation, pushing the public toward incitement and violence. This comes and goes with the decrease in Jewish victims, at least until the next flare up.

Palestinians, on the other hand, do not have the privilege of enjoying these imagined letups: the Palestinian mind, as opposed to the Israeli one, is in a constant state of war. Perhaps because the war on the Palestinian side never actually stops.