The state’s attempt to bring down one of Israel’s most important anti-occupation organizations may backfire in a big way.

An Israeli court is set to decide next week whether the Israeli anti-occupation organization Breaking the Silence will be forced to reveal the identity of a soldier whose anonymous testimony raised suspicions of war crimes. By trying to expose the identity of Breaking the Silence sources, the state attorney — who is leading the move — is not trying to prevent soldiers from exposing more information on the violation of Palestinian rights in the occupied territories. Rather it is trying to undergird the hierarchy of the state — to show once and for all that Breaking the Silence, and civil society at large, are subject to the power of the army.

Human rights discourse cannot do much to stop the army. A soldier who breaks her or his silence knows well that if their identity is revealed, they may have to take responsibility for the actions of their superiors, despite the fact that the officers and generals are the ones who continue to entrench the occupation. The soldier breaks her silence in order to raise public awareness over the military rule in the occupied territories — this awareness is far too crucial to be silenced.

One can assume that the state attorney will achieve its goals in the crusade against the organization, one that began over a decade ago. But does that mean the end of Breaking the Silence? Not necessarily. The public and international outcry over a soldier who takes public responsibility for crimes committed in the name of Israel’s military regime will place Breaking the Silence at the forefront of the struggle against the occupation.

The fear of putting an end to soldiers’ testimonies is a worrying possibility, but it could also provide the opportunity to move away from anonymous testimonies that would allow a real opposition to the army. The army is worried by the Israeli society (as well as the international community), as is the state attorney. Breaking the Silence must do everything it can to fight against the attacks against it, as its work is too important, not only to Israelis, but also to Palestinians. 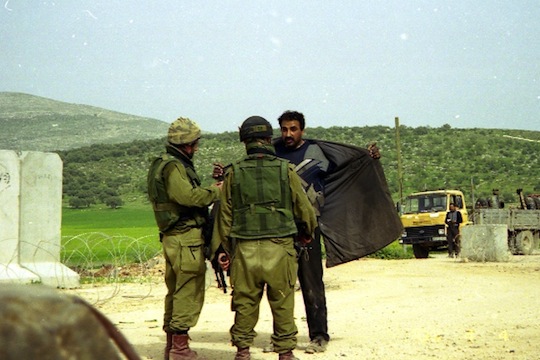 Illustrative photo of Israeli soldiers search a Palestinian at an IDF checkpoint. (photo: Breaking the Silence)

The concept of breaking the silence is intended, first and foremost, to break down the wall of silence surrounding the Israeli soldiers who took part in the occupation. Their conscience did not allow them to continue with their lives as usual without taking responsibility for the Israeli public, which doesn’t know — or want to know — about the horror of the occupation. They are not breaking the silence in order to cover up the orders and deeds they carried out during their service. On the contrary, they are breaking the wall that has towered above them for generations and in order to bring about a better future. They are not breaking the silence out of a feeling of belonging to the Palestinian cause. In fact the opposite is true: they do so because they feel they are a part of the Jewish people.

Some of the discharged soldiers, and even those that work for Breaking the Silence, identify as Zionists, and feel a sense of pride and appreciation for the IDF. They declare that it is their civil duty to ensure that the public knows full well what they went through during their service, and specifically the abuses against Palestinians that they carried out. Those who break the silence do not reveal their identities so that the process of speaking out does not carry with it the possibility of a lawsuit or an attack by the public or the state. Is this kind of immunity justified? Absolutely — this is part and parcel of an independent organization that is not subject to the military. A discharged soldier does not need to pay the price for something his officers ordered him to do. Just as the soldier in Hebron is not the sole culprit for the execution of the Palestinian in Hebron, neither is the soldier who reveals the orders he received during the last war on Gaza.