With or without a ceasefire, the brutality of the last week will be revisited upon the Palestinians of Gaza – a fact that, unsurprisingly, leaves no room for diplomacy.

It should come as no surprise that Hamas Tuesday de facto rejected what by all accounts was an Israeli diktat – disguised as an Egyptian ceasefire proposal – to end Israel’s relentless assault on the organization and its base of operations, Gaza. Following a week of near-constant Israeli bombing, the brunt of which has been borne by Palestinian civilians, the Egyptian proposal featured none of the demands on which Hamas had been most vocal, chief among them an end (or, at least, a demonstrable easing) of Israel’s blockade and the release of Hamas members detained by Israel at the height of its now month-long military campaign in the West Bank. Many of those detained had been swapped for former Hamas hostage Gilad Shalit. But this time around, Hamas could make no such bargain.

Short of bartering the lives of more innocents, what will move Hamas towards a deal? The question is especially urgent now that Egypt’s one-sided proposal has failed. As nearly two million Palestinians await an end to their third full-scale bombardment in just over five years, Egypt remains the only country that has successfully served as an intermediary between Hamas and Israel. But the prospects of another Egyptian-brokered ceasefire look dim. 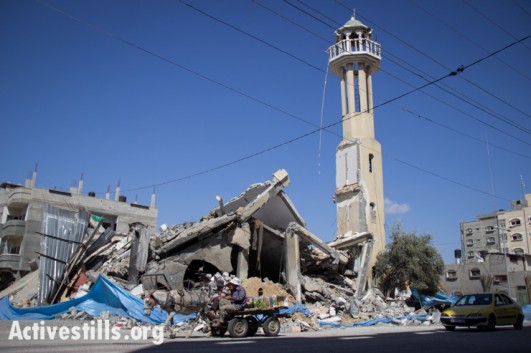 Farouk mosque of an-Nuseirat Refugee Camp lies in ruins after being struck by Israeli bombs, Gaza Srip, July 14, 2014. The mosque was hit two days before.

This time, Egypt’s proposal came a full week after this latest lopsided exchange of violence began. That’s a week too late for the nearly 200 Palestinians who have been killed to date, or the more than 200,000 who have had to flee northern Gaza in the face of an impending Israeli ground invasion. The lag is a sure sign of Egypt’s true intentions: it has little interest in sparing the Muslim Brotherhood-affiliated Hamas – even if that comes at the expense of more civilian lives. After all, the Sisi government has sentenced hundreds of accused Brotherhood members to death in summary trials of its own.

What about the Americans? Can they broker a deal? With the US reinstating military aid to Egypt last month – and simultaneously dispatching Secretary of State John Kerry to lend diplomatic heft to the alliance – Hamas can no sooner count on the Americans for mediation, at least not on its terms. In any case, Kerry has little sway with Israel. Since his failed bid to jumpstart negotiations between the Palestinians and Israelis – a failure he pinned on the latter’s obstinacy over settlement building – there has been no love lost between him and Benjamin Netanyahu. One example of this is that the Israeli prime minister, reeling from recent American moves toward a détente with Iran, flat-out ignored Washington’s preference to continue engaging with a new Palestinian government, one formed as part of the Fatah-Hamas reconciliation deal last April.

That leaves only one possible intermediary: Mahmoud Abbas and the Palestinian Authority in Ramallah. Early reports indicated that Abbas was Israel’s sole interlocutor leading up to the Egyptian proposal, a move that may well crush his own political ceasefire with Hamas. Abbas said an interviewer last week that he prefers “to fight with wisdom and politics,” not rockets. But his tactics have done nothing to protect Palestinians from Israel’s onslaught in Gaza and throughout the West Bank. And that, in turn, has stripped him of legitimacy among Palestinians. 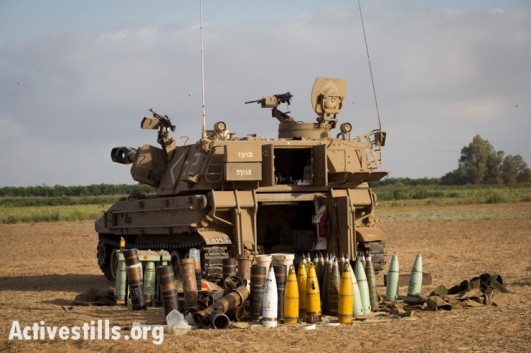 Hamas knows as much and seems to have jettisoned any hope of meeting Abbas half way. Even though it maintains that the Hamas leadership had nothing to do with the kidnapping and murder of three Israeli teens last month, its de facto rejection of the Egyptian proposal means that whatever Abbas had in mind by way of “wisdom and politics” is completely irrelevant to the group now.

For now, Abbas remains in charge of the Palestinian Authority, but his title earns him no sway with Hamas. Its leaders know all too well that if the first responsibility of government is to protect its constituency, the Palestinian Authority can do no such thing. More to the point, Hamas knows that Palestinians themselves are increasingly disaffected by inaction in Ramallah, and the group has nothing to lose by distancing itself.

Ultimately, no one has done more than Netanyahu to strip Hamas of its incentives for a negotiated outcome while at the same time exposing the Palestinian Authority’s impotence. The Israeli premier’s dubious achievement fulfills his promise – a full six weeks before the three Yeshiva students were kidnapped – to cut off talks with the Palestinians over the Fatah-Hamas reconciliation deal.

Now that he’s kept his vow, how many more Palestinians must die before Netanyahu reins in his rampage? To judge by the sentiments of those around him, the killing – entire families annihilated, more than 1,200 homes destroyed, schools and hospitals targeted – has only just begun. Here’s Knesset member Ayelet Sheked, for example, who had this to say about Gaza’s mothers just before the bombing began:

They should go, as should the physical homes in which they raised the[ir] snakes. Otherwise, more little snakes will be raised there.

In other words, with or without a ceasefire, the brutality of the last week will be revisited upon the Palestinians of Gaza – a fact that, unsurprisingly, leaves no room for diplomacy.

Related:
What does Israeli ‘acceptance’ of ceasefire really mean?
‘They left us no choice’: On military escalation and its Israeli rationalization
How Netanyahu provoked this war with Gaza