The absence of an honest one- vs. two-state debate prevents progress in the reconciliation between Jews and Palestinians in Israel/Palestine. 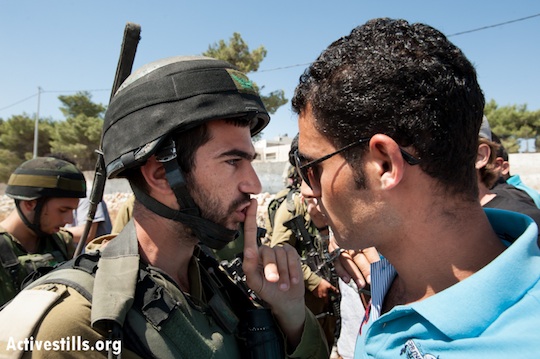 (Illustrative photo by Ryan Rodrick Beiler/Activestills.org) “One-state advocates have mainly engaged in rolling their eyes at the foolishness of those who still hold on to the carcass of the two-state solution.”

In a recent piece, Noam Sheizaf berated the entire gamut of participants in the debate surrounding the Israeli-Palestinian conflict for wasting time by arguing about whether the two-state solution is dead or only mostly dead, and whether the one-state solution is impossible or merely improbable. The trigger for this particular piece was a text published by Prof. Ian Lustick in the New York Times.

Click here for +972’s full coverage of the diplomatic process

Meanwhile, the one-state advocates have mainly engaged in rolling their eyes at the foolishness of those who still hold on to the carcass of the two-state solution. Far from trying to actually convince anyone of the possibility of the one-state solution, or indeed finding ways to make this eventuality more palatable for people on both sides, one-state supporters simply point out what they see as a plain truth – that this is an ex-solution, and await everybody else to come to their senses.

This is often driven by the logic of inevitability that is behind much of the one-state thinking, and Lustick is a prime example of that. He assumes, through an analysis very similar to that of Sheizaf, that the one-state reality on the ground will eventually bring about the disappearance of the Palestinian Authority, and thus the removal of the last veil hiding this reality, forcing Israel to unabashedly pursue its oppression of the Palestinian people. Next he describes a nightmarish scenario taken directly from the experience of Apartheid South Africa, which will finally lead to the inevitable redemption via a one-state solution.

With two-staters seeing one-staters as boogeymen, and with one-staters believing in the inevitability of their solution, there is hardly any room for debate between the two groups, let alone one that is our “favorite pastime.” It is in fact the absence of such a debate that makes progress in the resolution of the conflict nearly impossible. For it must be the duty of the supporters of the one-state solution to explain not why it is inevitable, but why it is desirable. So long as two-state advocates see one state as a hellish future of war and misery, they will continue to strive to delay it, inevitable as it may be. And so long as the one-state advocates cannot put forward an appealing vision, one that does not pass through anguish and death on its way to implementation, they will find few who are willing to choose this path.

Sheizaf’s admonition that we must cease discussing our visions of the future and focus on the current reality alone ignores the fact that our ideas about what the future holds are critical to our understanding of our options now. If a one-state future is the nightmare that two-state supporters fear then we must avoid a one-state solution at all costs, and security concerns will overrule the legitimate demands of the Palestinians.

If, however, the one-state advocates can put forward a positive vision – one in which the democratization of the entire population living between the Jordan River and the sea leads to a peaceful reconciliation, and each community can preserve its autonomy and culture while sharing the land under a joint government – then and only then can a new road be paved to work together toward a solution that respects the needs and legitimate wishes of all. This is not the vision of an inevitable one-state solution. This will have to be the product of a herculean political effort.

Dubi Kanengisser is a PhD candidate of political science at the University of Toronto, studying the relationship between ideas and political institutions. Dubi also writes the Hebrew-language blog, “Can’t Hear You!”.

Related:
Two state vs. one state debate is a waste of time, political energy
One or two states? The status quo is Israel’s rational choice
Why it’s time to discuss the one-state solution