A few comments on the recent flare-up in the south expose the blind, knee-jerk public support the government and IDF get for their actions against Palestinians.

Judy Nir Moses Shalom, the wife of senior Vice Prime Minister Silvan Shalom, is known to pretty much say whatever she wants, whenever she wants. Calling her outspoken is an understatement. Besides being married to one of Israel’s most senior ministers (Shalom has also served as foreign minister and finance minister), she belongs to one of the most powerful families in Israel, who own what used to be the largest daily, Yedioth Ahronoth, before Sheldon Adelson’s Israel Hayom came along and took first place.

Moses has said controversial things in the past, but yesterday, as things were getting tense, she tweeted something that could be seen by some as a call for a massacre, if not an outright genocide:

The first tweet says: “Have a good week, I hope that today they decide to destroy Gaza if they don’t stop shooting. Let them suffer as well.”

The second tweet says: “I pity those who hate themselves and respond against my tweet to attack Gaza. Keep on sunbathing. Maybe if the Gazans had their homes hit they would finally do something against the murderers.”

Her latest tweet, from early this morning, says: “It’s not fair that we are sleeping here quietly and a million people in the south are living under fire! We have to bomb Gaza. We’d be happy if the children are evacuated. It’s time to stop the abuse.”

Remember Tanya Rosenblit, the woman who refused to sit in the back of the bus despite the demands of Haredi men sitting next to her? I wrote about Tanya’s amazing stand against discrimination with awe.

Here’s what she wrote on her Facebook wall yesterday: 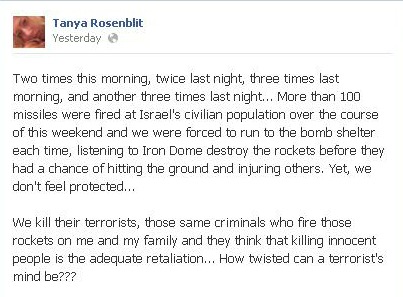 Twisted minds indeed. “Brainwashed” might be a better term to describe the Israeli public discourse over this recent flare-up.