In order to give preference to contractors located in West Bank settlements, won’t Israel’s parliament first have to distinguish them just as the EU plans to? 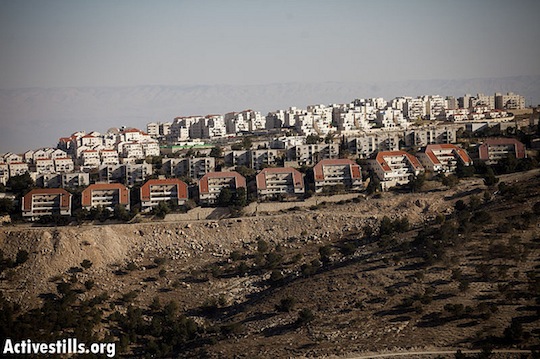 The settlement of Ma’ale Adumim, located east of Jerusalem. (Activestills.org)

A key parliamentary committee advanced a draft law on Monday that would require the Knesset to give preference to West Bank settlement businesses in one-quarter of the goods and services it contracts.

The bill, sponsored by Likud MK David Bitan, is an attempt to strengthen Israeli businesses in the occupied West Bank in response to European plans to label settlement goods. The bill must still pass a number of legislative hurdles before becoming law.

MK Dov Khenin, of the Arab-Jewish Hadash party, was quick to point out the irony of the bill.

“In order to give a real preference to settlement products you need to [label] them, and in doing so, the Knesset is joining the growing worldwide trend toward labeling settlement products,” Khenin said following the committee hearing.

The European Parliament last month officially endorsed the labeling of settlement products, an official EU policy goal that has gone unimplemented for years. The EU’s free trade agreement with Israel has always demanded the distinction of settlement goods. Imports from the West Bank are subject to EU tariffs, unlike products produced inside Israel proper.

Before the Knesset Committee hearing on Monday, committee chairman MK Bitan attempted a shame the left-of-Likud Zionist parties into voting for his bill. Bitan added language that gives the same Knesset purchasing preference to other “periphery” areas in Israel, namely the Galilee and Negev.

And it worked, kind of. A few hours after the Knesset hearing the headline on right-wing news website NRG read: “Because of [the West Bank]: The Zionist Camp voted against the Galilee and the Nevev.”

It is through bills like this that the peculiarity of official Israel’s relationship with its West Bank settlements comes into focus. Whereas most governments give preference in bidding for contracts to suppliers and manufacturers located inside their own country, Israel is trying to do the same for business located outside of its borders.

Historically careful not to officially annex any parts of the West Bank — setting aside East Jerusalem for a moment — the Israeli government makes little distinction between its governance of areas within the area internationally recognized as its own and the “areas under its control” — the occupied West Bank.

That lack of distinction is most on display in attempts to fight boycott efforts. Instead of differentiating boycotts that target only Israeli settlements (“Zionist BDS,” as Peter Beinhart calls the strategy), whose trade and exports are marginal in comparison to the economy inside Israel proper, Israel has doubled down and rejected the ideas of even its most supportive critics, arguing that there is no difference between West Bank settlements and Israel.

In that, the Israeli government and its right-wing base is correct. A blurred-into-oblivion Green Line is more reflective of reality on the ground than attempts to boycott or isolate only those Israeli entities and commercial ventures located or operating in the West Bank.

What is one to do with a national, Tel Aviv-based bank that funds construction in West Bank settlements? How about petrol companies that own and operate gas stations in the settlements? What about national infrastructure entities that literally build the segregated roads that serve settlements and supply electricity, cellular towers and water to outposts even the Israeli government considers illegal? And what of state agencies like the Israel Police that draw on the manpower and resources of their Israel-based organization to run their West Bank operations?

Soon it will be possible to say the same of the Knesset itself.