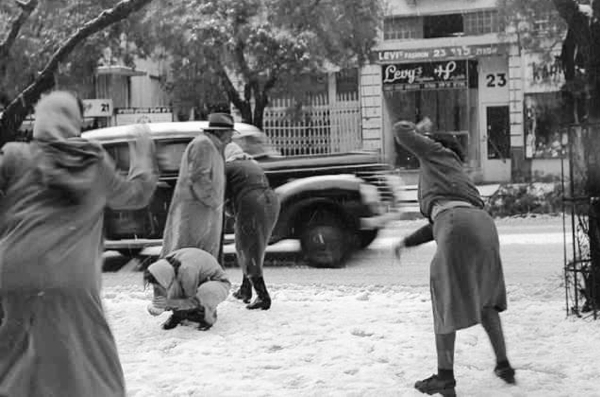 The Jewish New Year begins as the cruel Middle Eastern summer draws to an end. My non-Jewish ex-wife used to say: “Your new year makes sense. Something is actually beginning. Nothing is tangibly beginning on the first of January. Of course the days are getting longer but you really wouldn’t notice that until late February.”

To be fair, we really wouldn’t know it’s autumn by the weather until October. Tomorrow is new years’ eve, and I’m sitting here with both fan and AC on full blast, sweating nonetheless, but there was a small breeze here and there over the last few days, instilling hope in a sunburned heart. I pray for such a breeze tomorrow evening, when we’ll walk down to the synagogue to receive the new year and sing the most beautiful air I know, the one that is hummed by the congregation on that night just before it exclaims “Barchu et Adonai hamevorach,” bless Hashem, the blessed one.

I don’t believe in Hashem the blessed one, but I believe in beautiful airs. That’s perfectly fine in Judaism. Even my religious grandfather, who used to take me along with him to his shul in Rehovoth on Rosh Hashana, could never commit to me that he actually believed in God. He believed in Judaism, he believed in the tradition, in the poetry of it and in what it did to family and community.

Maybe on this New Year’s eve I should look into that paradigm more carefully. Living in Israel demands a lot of faith. Peace talks have begun again. Do we believe they will lead to anything? Four hundred children of foreign workers, born in this country, are due to be deported tomorrow. Do we believe we can possibly still reverse the decision? Wages are low and the cost of living high. Could we ever get out of debt? On all three counts I would say my faith is rather low.

So here’s my New Year’s resolution: I’ll put faith aside. Faith matters not. What matters is action. We have to keep doing, to keep trying to better this place even though it may not be improvable. A Jewish life consists of action: you perform the mitzvoth, you sing the beautiful air. You work to better this world, work for “tikkun olam,” though you know how stubborn it is. A solution to our troubled situation may never be found, but working to reduce harm on the day to day level is crucial. I will make it a tradition just as my grandfather made going the the synagogue a daily habit, regardless of whether anyone was listening to his prayers.

In this world heating up gradually, we can’t even trust in the weather cooling down. In “Three Men in a Boat” J. K. Jerome describes an English summer in which “the good weather never came.” This could be one such year for us. We’ve known a few: years of drought, of inadequate winter that didn’t suffice to refresh us and soon was followed by another punishing summer. We’ll celebrate New Years regardless and experience an authentic sense of renewal even at 34 degrees Celsius.

I wish for all of you, whether Jewish or not, to feel such a sense of renewal and to have a year of little faith and many deeds. Shana Tova.