For the past several years, Palestinian women from all walks of life have been taking part in a video project to document human rights violations under occupation. In honor of International Women’s Day, one of them tells her story.

My name is Manal Ja’bri, I am 38-years-old and I have seven children, between the ages of 9 and 18, and I am the sole breadwinner in my family. I grew up in a house near the West Bank settlement of Kiryat Arba. Settlers burned my family’s home and used to beat us on our way to school. One of the problems in Palestinian society is that people don’t differentiate between Israelis, Jews and settlers – they are all settlers to us. I used to think the same way, but over the years I learned to tell the difference.

Three years ago, I read a wanted ad in the newspaper for field researchers for B’Tselem, an Israeli organization dedicated to documenting human rights violations in the occupied territories. B’Tselem trains Palestinians in specific locations in the West Bank and East Jerusalem, where tensions are high and clashes are commonplace, to use video cameras to capture those violations. The footage exposes the Israeli and the international public to the reality of life under occupation. 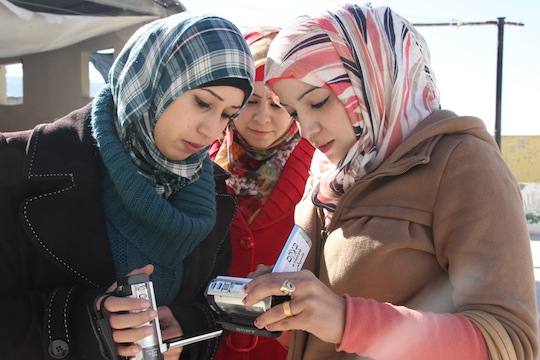 When I first started working for B’Tselem, I was frequently criticized by Palestinians for working for an Israeli organization. Over time, however, Palestinians have learned to trust B’Tselem, because they know that our cameras are out there to safeguard their human rights. Today, I am in charge of B’Tselem’s video project, and I feel prouder, stronger and more self-confident.

My children used to get criticized at school by their friends because “their mother works with the Jews.” Meanwhile my family did not approve of my work, claiming that “it is a man’s job.” Yet, as time went by, everyone saw that what I did worked for their benefit, and my family saw how I was able to support my children.

My phone rings non-stop: victims call in to report abuses; volunteers call to report incidents they’ve filmed; journalists and human rights activists from other organizations call to ask about specific events; and young men and women call and ask about joining the video project. All this makes for a long list of responsibilities and even longer work days. With a camera in one hand and papers in the other, I start my day racing from checkpoint to checkpoint, all the while stopping on the way to chat with passersby about the situation. The job has unusual hours, such that I often get back home late at night, or must leave at a moment’s notice to document late-night abuses.

Many times the soldiers and settlers curse at me; sometimes I am even attacked and arrested. The humiliation of being arrested and our treatment by the soldiers is often very difficult to deal with.

Watch Manal Ja’bri speak about her experiences filming the occupation:

Today, in addition to my family’s support, I also have the support of my colleagues.  This has made me what I am now: a role model in the eyes of the women volunteers of the video project. I am very proud of these women, and can see how volunteering in the project made them much stronger and more self-assured.

We have introduced a new culture into our conservative society, a culture where women stand bravely, gripping their cameras tightly as they face soldiers and checkpoints. Soldiers have grown accustomed to this sight, and the presence of the camera often makes them calmer, thereby preventing potential violence. Along with the video volunteers, I feel that my job is but one way of fighting the occupation. By documenting and filming, I am shooting back.

On this International Women’s day, I wish for a better life for Palestinian women, too many of whom have been killed in domestic violence incidents as of late.

I wish for us to be able to walk freely without needing a camera to defend ourselves or to document the indignities of the occupation.

I wish to start using cameras to show the beauty of our nature and cities.

I wish for a dignified and just life for all the women around the world, for them and for their families and children.

Read more:
Meet the Israeli women who have stood up to the occupation for 26 years
PHOTOS: African women march for their rights in Tel Aviv