Palestinian, Israeli and international women activists dressed in traditional Palestinian garb attempted to walk down Shuhada street, Hebron’s main commercial thoroughfare. After only a few minutes, they were stopped by soldiers, and seven people were arrested in total. 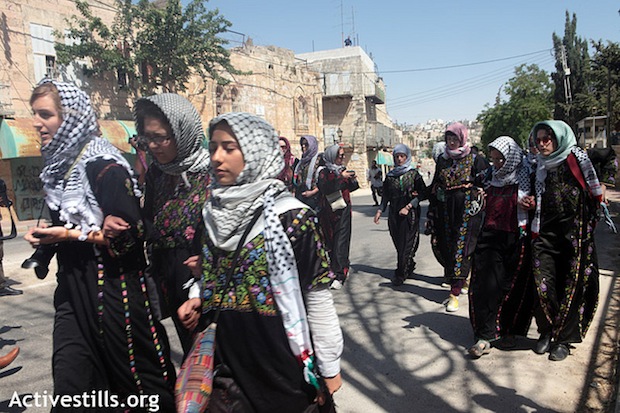 A group of Israeli and international female activists joined Palestinian women on Wednesday in a direct action in Hebron to protest the ongoing ban on Palestinian freedom of movement on Shuhada street. The street, which was once the lively commercial centre of Hebron, was closed off to Palestinian vehicular traffic after the 1994 massacre of 29 Muslims in the Ibrahimi Mosque by Baruch Goldstein. Since 2001, Palestinian pedestrians were barred from the street, turning it into a Jewish-only zone.

We arrived to Hebron just before 2pm, to be led to a previously undisclosed location, which would be our gathering point. We ended up at an apartment facing Shuhada Street, whose residents are forced to use a side entrance from an alley off the old city’s market.

Already waiting there was another (female) coordinator, who laid out the plan for us: we were to dress up in traditional Palestinian women’s garb and walk out to Shuhada street through the (forbidden) front door. While she was drawing an impromptu map of the area for us, figuring out the best escape routes from potential violence from either the settlers or the soldiers. A few of us exchanged meaningful glances. We understood the danger lurking for us outside. We were aware we could get arrested or even injured. 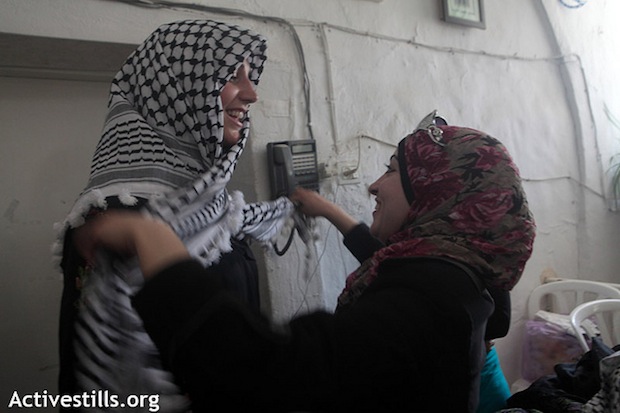 Annual “Open Shuhada Street” demonstrations have been met with excessive violence by the Israeli military, as I witnessed myself this past February. In light of recent successful women-only actions in Nabi Saleh and the growing visibility of women in protests throughout the West Bank, local activists decided to test the ground and see how the army reacts to an all female-direct action. Since any action in Shuhada street necessarily involves the risk of brutal arrests, which are much more complicated for Palestinians, they decided to invite Israeli and international solidarity activists for this symbolic – but important – act.

Our attempt was to walk to Beit Hadassah and back, and try and walk “slowly, like Palestinian women walk.” We dressed up in the familiar embroidered black garb identified as traditionally Palestinian, and our gracious host helped us don the hijabs – which for most of us were kuffiyehs, not a traditional female headdress by any account. We were instructed to exit quickly through the front door into the street and stick together.

The first thing I saw when I stepped outside was a white civilian jeep stopping right in front of us, nearly running us over and trying to block our way. A stocky man stepped out angrily. The man was a settler, and he immediately alerted his friends, a few of them approaching us quickly, trying to block our path as we proceeded along the street. The soldiers, fully armed, were quick to follow.  A scuffle erupted as we were slowly making our way up the street towards our destination. For a while, the soldiers were forcibly attempting to block us, then they changed tactics, moved behind and among us, and brutally pushed us towards the nearest checkpoint. 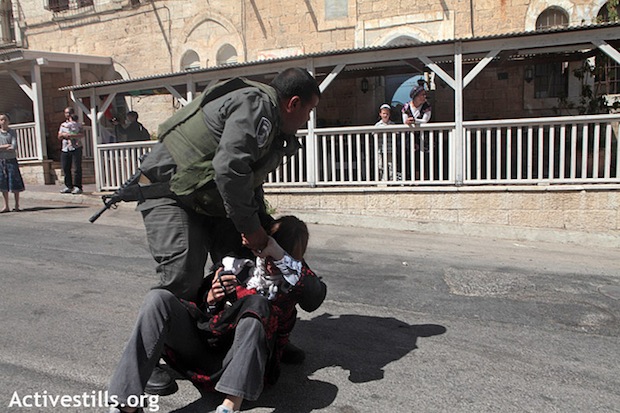 Later on, as some of us mused that they were probably confused by our actions. We were women, unarmed, Israeli and international citizens, which made our presence there perfectly legal. Their confusion becomes even more obvious when one considers they were pushing us towards the Palestinian-controlled area, which is legally forbidden for Israeli citizens.

The settlers, on their part, screamed at us, provoking us into verbal confrontations (“Have you no heart? Hebron is for all the Jews, you as well!”) and cursing us (“Traitors. You are worse than those Arabs”). The soldiers pushed us hard using their guns, knocking a few of the activists to the ground. When male ISM activists came to our aid, they were violently arrested.

Then they pushed a few of the women to the ground and started hitting them. One sat on top of a skinny girl, another one was choked by a soldier, crying in pain. Her glasses were smashed by one of the soldiers as she lay on the asphalt. I was still nursing a leg injury, which severely limits my movements. Nonetheless, the soldiers kept shoving me hard, even after I told them I am injured and cannot walk any faster.

Then, at some point, the soldiers apparently decided to make arrests, probably to scare us all so we hurry up towards the checkpoint. They arbitrarily arrested three more of the female activists, two Israelis and one journalist, six altogether. Finally, they forced us all to go through the checkpoint to the Palestinian-controlled part of the city. 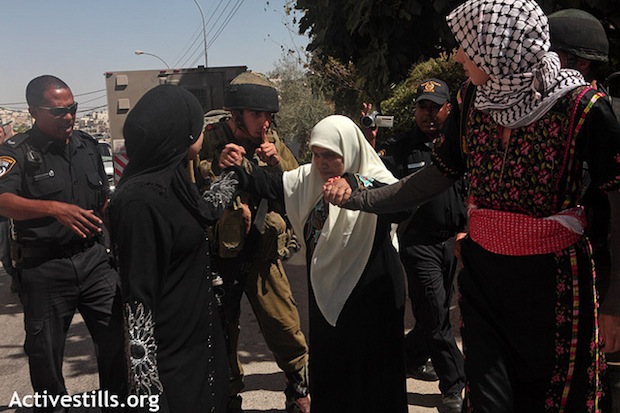 We then went to a local woman’s house and the soldiers entered just as several of us were changing back into our street clothes and demanded to speak with the “owner of the house.” When someone pointed them to the elderly woman, they ignored her and instead asked for “the man who owns this place.” “There isn’t one,” they were told, “it’s just her and her daughter.” Then the soldiers split up: some remained with us and even tried to climb up to the roof, others kicked doors of other apartments, making an unbelievable racket.

We all snapped pictures of them, which did not exactly please them. The soldiers demanded we don’t photograph them. We continued anyway. Then they separated us from the group of photographers that accompanied us throughout the day, forced them out to the street and attempted to lock us in. Our host courageously confronted them the whole time, berating them for their rude behavior and for the intrusion.  They finally let us go, but shortly after returned to the area in search of someone. We later learned they were looking for the son of our host, and once they found him, he was arrested and taken away.

Since we parked the car near the Tomb of the Patriarchs, we had no choice but to exit the though the checkpoint. The soldiers were baffled; we were both Israelis, yet we just emerged from an area legally forbidden to us. They made us wait around while they checked our IDs. As we were walking away, I heard one of them telling the other: “No use talking to them. They are leftists. They hate you.” The day ended with us waiting long hours outside the gates of the Kiryat Arba police station waiting to hear from (and hopefully pick up) our incarcerated friends. By 11pm, two activists – one Israeli, one international – along with one journalist – were released, but the rest were to spend the night in jail and get a court hearing the next morning in Jerusalem. The Palestinian man who was arrested remained in custody until 4 am and then released as well. Some of us had expressed doubts about this action. A few said that the dress-up part reminded them of oriental lore; others were critical about the prominent role of men in organizing and “defending” us. But after we exited the checkpoint, spirits were up. The general sense was that this action was successful – we did, after all, achieve our goal of walking up Shuhada street to the checkpoint, as planned, embarrassing the soldiers and the settlers while we were at it. As one Israeli activist from Jerusalem explained to me: the idea to dress up originated from Palestinians as a strategy, and therefore she no longer construes it as “orientalist” or problematic in any way. She thought the action was successful, but qualified it can only be claimed as a success if news of it is widely disseminated to affect people’s realization of the absurdity of the situation here.

While the Israeli activists were more familiar with the hardships of Palestinians in Hebron and have visited the city before (whether in tours organized by “Breaking the Silence” or for protests), I was curious to hear the perspective of the internationals that participated in the action. One young woman from Washington state who has been volunteering in Bethlehem explained to me that her passion for the Palestinian cause and the uniqueness of the action brought her to Hebron today, and that she is particularly inspired by the role Palestinian women have taken on in protests. The action, which to her as well was a success, was both peaceful and pointed, a powerful show of solidarity with the plight of Hebronites.