From Pussy Riot to Women of the Wall, our male religious authorities are so intimidated by women mobilizing support for religious freedom and expression, that they feel the need to restrain, detain and jail this great potential for change. 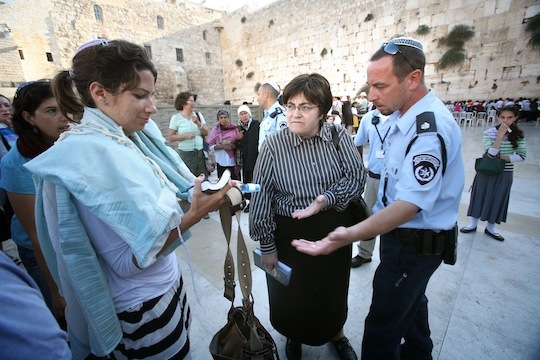 I admit that a few weeks ago, if you asked me, “What do Women of the Wall and Russian punk band Pussy Riot have in common?” I would have had a good long laugh while waiting for the punch line of your joke. However, since the arrests on Sunday, August 19, of four women at the Western Wall of Jerusalem, there has been nothing funny about the trends that these two very different groups represent.

On February 21, five members of the all-female, renegade punk band “Pussy Riot” staged a guerrilla performance on the altar of the Cathedral of Christ the Savior in Moscow. The women danced and sang the words, “Our Lady, Chase Putin Out!” while crossing themselves until they were arrested. Months later, on August 17, 2012, just two days before the arrests of four Women of the Wall at Jerusalem’s Western Wall, the women of Pussy Riot were sentenced to two years in prison each.

This week, Russian media outlets picked up the story of the arrests of the women in Jerusalem and linked it to the outrage felt all over the world at the sentencing of Pussy Riot. The common thread between the two stories is that women “revolutionaries” are being punished for their acts – praying, creating art or protesting – which are considered offensive to religious sensibilities in their country. While media attention is welcome, especially in Russian as it reaches so many Jews and Israelis that may not otherwise hear our message, I feel the need to examine this unlikely partnership a bit further.

With Pussy Riot, the name says it all. A reclamation of feminine sexuality, an opposition to sexism and other forms of control – the group’s name is accompanied by music, art, masks and a huge, rapidly growing movement of supporters around the world. Women of the Wall are a group of Jewish women – Reform, Conservative, Reconstructionist and Orthodox, ages 15 to over 80 – who wake up at 6 a.m. once a month to pray together, while remaining within the realm of Jewish law, at Jerusalem’s Western Wall. At first glance it seems that no two groups could be more different.

Both groups are undeniably feminist and are a perfect illustration of the diversity of feminism. The acts of both groups have been painted by the legal and religious authorities, followed by the media, as renegade protesters. Despite the vast differences between the two groups’ missions, appearances and cultures, they have been characterized as extremists, provocateurs and a threat to religion and religious people.

I am not the spokesperson for Pussy Riot, but from what I understand, they would categorize their acts as art and music. I am the spokesperson for Women of the Wall and we in no way consider our acts from Sunday, August 19, 2012 – or any other time over the past 20 years – a demonstration or provocation. What we do at the Western Wall is called prayer, and our religious belief is that praying out loud as a group of women with free expression of our religious practices (wearing Tallit – prayer shawl – and reading from the Torah scrolls) does not violate Jewish law.

I would determine, after examining this comparison, that the true common denominator between Pussy Riot and Women of the Wall is not our acts, but the strict control over speech, religious freedom and expression in our countries. Our male religious authorities are so intimidated to see a group of women mobilizing support for women’s freedoms and religious expression, that they feel the need to restrain, detain and jail this great potential for change.

Police and religious authorities accuse Women of the Wall’s peaceful women’s prayer at the Western Wall (which can be seen in videos and photos) of being a danger to the public. In actuality, the music of Pussy Riot and the prayers of Women of the Wall are a danger to the status quo and the religious authority, which excludes women from free expression in public. These arrests are not the arrests of criminals, but the criminalization and stifling of civil disobedience against an unjust system. Pussy Riot and Women of the Wall have been arrested for offending the sensibilities of those in power, labeled extremists and jailed – not unlike the great movements that employed non-violent resistance and civil disobedience to achieve social and political change over the last century.

Shira Pruce, Director of Public Relations for Women of the Wall, has worked to advance social change in Israel at MASLAN- the Negev’s Sexual Assault and Domestic Violence Support Center, the Jerusalem Open House for Pride and Tolerance, MEET and the World Union for Progressive Judaism. She received her BA in Women and Gender Studies at Rutgers University in New Jersey before making aliyah in 2004.