For the first time in its seven-year run, the annual DC Palestinian Film and Arts Festival brings live performances to the stage, highlighting the role of women in storytelling. 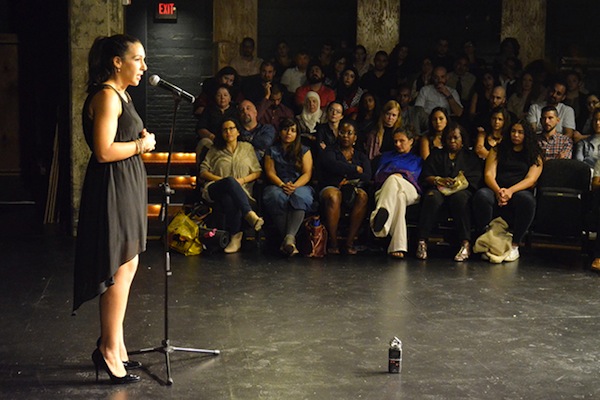 In an age of increased reliance on digital media, and when diaspora identities are being formed through the lenses of cameras, live oral performances remain a vital tool of cultural transmission. Perhaps that is why the DC Palestinian Film and Arts Festival, as it entered its seventh year this past month, added a new addition to its schedule: live performances.

While the majority of the festival’s agenda has traditionally been made up of films and talks with filmmakers, this was the first year the DCPFAF team was invited to stage a live revue at the Kennedy Center’s Millennium Stage, which included a theatrical monologue penned by DCPFAF co-founder and Palestinian-American legal scholar Noura Erakat, in addition to another live storytelling event put on by Palestinians Podcast.

Every year, the festival seeks to include Palestinian-Americans from all geographic origins. Erakat and the Palestinians Podcast founder Nadia Abuelezam are both originally from the Bay Area in California, while storyteller Andrew Kadi grew up in Brooklyn, and storyteller Samar A. Najia immigrated to Virginia from Lebanon.

“So much of the program wasn’t turath,” says Erakat. “These are iterations of being Palestinian-American.” The word turath, Arabic for heritage, is meant to reference an established cultural tradition of relating Palestinian stories. That is not to say that Palestinian-Americans are not honoring older traditions, but rather they are creating new ones for their particular time and place. These performances, after all, are done in the same physical space as the audience — they are literally live.

Both “I Am From Here And I Am From There,” at the Kennedy Center and the Palestinians Live! event at Studio Theater featured a range of different ages and immigration statuses of Palestinian-Americans. The two shows, however, shared one common theme: both were dominated by women, with storytellers focusing on women — aunts, mothers, cousins, some in Palestine, some in the suburbs of northern Virginia.

Lebanese-American actor Leila Buck broke the “fourth wall” in her performance of Erakat’s monologue, “Visiting Palestine,” based on a political prisoner relating her experience of being a mother to murdered and displaced children. 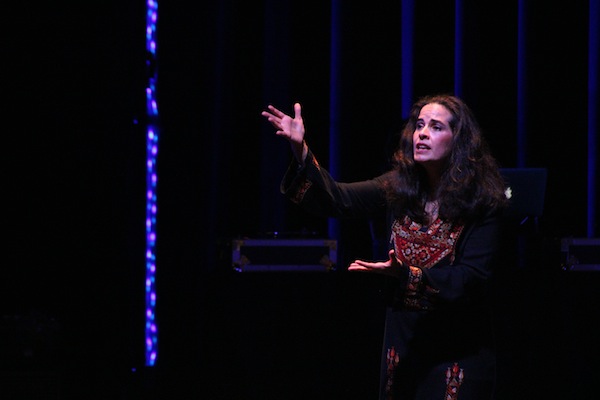 These shows played out on an American stage echo some of the findings of scholarship about oral history and women in Palestine. British anthropologist Rosemary Sayigh observed that Palestinian women from rural backgrounds were the primary performers of the hikaya genre of storytelling. Hikaya is the Arabic word for “tale” and refers to a genre of storytelling where the narrator relates a true story in a fictionalized format with memorable flair. “Younger Palestinians often covet the ‘oranges that taste so much better than anything you can buy,’ ‘herbs we don’t even know today,’ and ‘the beautiful stone houses in which we lived back there,’ write Isabelle Humphries and Laleh Khalili in their essay, Gender of Nakba Memory. “All these elements point to the role of women in history telling.”

The stories of the DCPFAF performers are not just individual — they relate to the collective. Podcast founder Nadia in her performance of the night talks about spending time with her aunt and cousins one summer in Palestine and realizing that all of them in their own way were searching for Palestine together. Although they have lived most of their lives in United States, they feel intimately connected to the lives of their friends and relatives in the West Bank and Gaza. Geographic distance has not prevented them from feeling the pain of ongoing displacement, occupation, and shared trauma — an essential element of collective Palestinian identity.

Similarly, the narrator of “Visiting Palestine” blurs of the lines between the individual and the whole. Erekat has left it to the audience to decide whether she is a particular person or a symbolic representation of the Palestinian people. Imprisoned for 69 years, the narrator pines for freedom and to be reunited with her last living children who have been scattered all over the world.

“The personal is political” is one of the mantras of the DC Palestinian Film and Arts Festival. The private and interior lives of Palestinians are all markedly intertwined with those of every other Palestinian, hyphenated or not. Originally founded by three Palestinian American women, the festival continues to demonstrate the importance of women’s narration to the formation of a cultural identity for the Palestinian diaspora. After all, it is the memories of women that thread each iteration of the Palestinian experience into a whole.

Christa Blackmon is a media anthropologist living in London. Her work explores the intersection of art and human rights. In 2016, her Masters dissertation on oral histories of the Nakba online received a Distinction from the School of Oriental and African Studies.