‘I didn’t know what to do. He kept insisting, so I felt that I had to answer him to make him stop, I told him that I’m married and have three kids but he didn’t believe me.’ A report about the women no longer willing to stay silent and the difficulties they face. 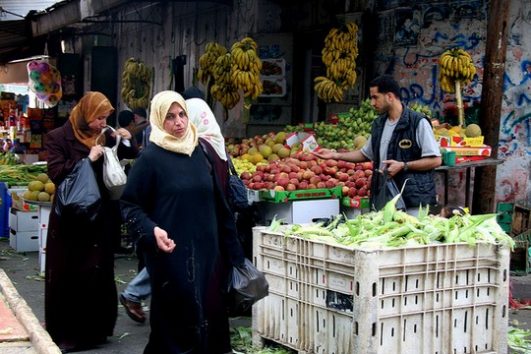 Writer’s note: Some women passengers quoted in this story asked that their last names be withheld to protect their privacy.

GAZA CITY – The growing number of women speaking out against sexual assault and harassment at the hands of powerful men seems to have created a sea change. In Gaza, however, women feeling constrained by conservative societal norms are cautious about speaking out about verbal and physical harassment, especially by local taxi drivers.

Huda, 26, said she tried ignoring a driver when he started whispering as she got into his cab. “He stared at me through the mirror, looking at me in a way that made feel terrified,” she recalls. “Then he asked me if I would go on a date with him. This was outrageous! I was stunned and I asked him to let me out of the car. I opened the door so that he was forced to stop, and  got out of the car in the middle of the street.”

Some say the situation is getting worse as a result of Gaza’s broken economy and Israel’s 11-year blockade that is strangling the Strip. With the unemployment rate over 40 percent, more young men are trying to make ends meet as drivers.

Drivers are required to obtain a special license and are assigned to drive in one of four districts in Gaza City. Other than that, regulations are not stringent.

Sama, 22, said she encountered a driver who pestered her with questions and made her feel unsafe: “I was on my way back home from college and the driver was trying to start a conversation with me. First he tried to look at me. Then he asked me for my phone number. I tried to ignore him because I wanted to get home safely and quietly. But then he asked me about something shocking: my marital status.”

“I didn’t know what to do. He kept insisting, so I felt that I had to answer him to make him stop, I told him that I’m married and have three kids but he didn’t believe me. ‘You look too young and too beautiful to have kids,’ he said, and kept insisting. Finally I gave him the wrong address so I could get out of the car and find another taxi. I just wanted to stay away from trouble,” Sama said.

Soha, 24, said she was harassed by an older driver after all the other passengers exited a shared taxi on her way to work: “The driver, who was in his 50’s, asked me if I was familiar with the green almond. ‘You look as delicious as that,’ he told me. I was shocked. He was my dad’s age. Even though we were only half way [there], I opened the door of the car while he was driving, forcing him to stop.”

Maha, 28, said she refuses to get into cars that have no other passengers. “Once, a driver waited until the other passengers got out, then asked her why she looked tired. He said, ‘I can comfort you if you like.’ I ignored that and told him to drop me immediately so I could find another car or I would yell.”

Pam, a U.S. activist working in Gaza, said a driver harassed her while she was on her way to work. “When I got into the car he was approached me improperly and touched my ankle,” she said. “I was shocked.”

Gaza Police Spokesperson Ayman Al-Batniji acknowledged that harassment does exist in Gaza, and estimated that more than 90 percent of the incidents are not reported because women are ashamed to complain or even talk about what happened, either to their family and friends, or to police. When police do receive a complaint, he insisted, it is fully investigated, adding that filing a complaint can help prevent harm to a woman’s reputation.

Nasser Mehdi, head of the Sociology Department at Al Azhar University in Gaza, said women in traditional societies may feel pressure to remain silent about issues that could affect their honor and reputation. “This often happens in Gaza, where many women fear that speaking up would cause a scandal, or would cause a stain on their reputations,” he explained.

But women’s silence only allows the problem to continue, Mehdi continued, blaming the women themselves and arguing that “if they spoke up, drivers would stop doing this.”

Dr. Fadel Abu Hain, head of psychology at the University of Al Aqsa in Gaza, also said the lack of complaints against abusive behavior allows it to continue. “[Women] must disclose their experiences to the police and reprimand the drivers for crossing ethical boundaries,” he said, while acknowledging that reporting can also affect a women’s reputation and social status.

Some drivers, however, reject the accusations against them, both blaming female passengers for what they describe as inappropriate behavior and warning against generalizing about all drivers.

“We’re not all the same,” said Ahmed Khalid, who has worked as a taxi driver for 20 years. “There are decent drivers and there are wicked ones, and I can’t blame only drivers. Some female passengers push the driver, especially younger ones, to act improperly.”

Another driver, Hani Hassan, noted that many countries require taxis to have surveillance or monitoring devices in the cars, as well as information about the driver, including name, identity number and vehicle number, which passengers can use to report a problem.

Salwa Omar, 32, said that if the media covered this issue more, it would help to remove stigmas held by public officials, police, the general public, and the women themselves.

Mohammed Moussa is a Gaza-based journalist. He earned a bachelor’s degree in English literature and now is a translator and English language trainer. He is passionate about writing poetry, which he says is like “a safe river where my feelings and emotions can flow peacefully.” Recently, Mohammed wrote a poetry book, “I Was Born in Gaza,” about his experiences during war.