The silence of our communal leaders signals that remaining silent in the face of prejudice is legitimate, as long as it isn’t happening to Jews. 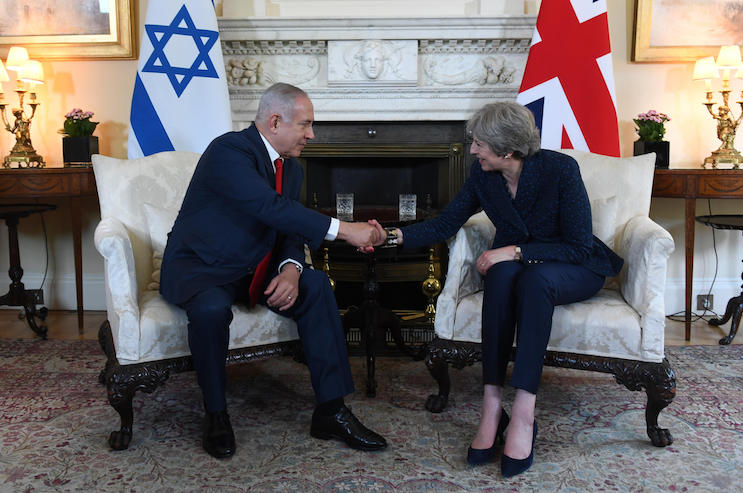 One of the first things we are taught when as children is that racism is wrong, and that when we see it, we must call it out. As Jews, especially diaspora Jews, we know the perils of racist language, laws, and deeds that go unchallenged.

The Board of Deputies of British Jews, which styles itself as the representative body of the Jewish community in the United Kingdom, has not made a single public statement on Prime Minister Benjamin Netanyahu’s recent declaration that “Israel is a state for Jews only.” This is the same Board of Deputies that blamed the killing of 52 Gaza protestors during the Great Return March on Hamas, praised the decision to move the U.S. embassy to Jerusalem, and put out a formal statement congratulating Donald Trump on his election win.

Even organizations such as AIPAC and the American Jewish Committee have raised concerns about Netanyahu’s recent coalition with the Kahanists of Otzma Yehudit. Meanwhile, the Board has justified its silence by claiming that it does not “comment on Israeli elections,” a decision that comes across not only as completely arbitrary, but also highlights a true lack of moral leadership for diaspora Jews.

It is important to recognize that when Netanyahu says Israel is for Jews alone, he is merely voicing the reality of what the Jewish state has become: a two-tiered system between Israeli Jews and Palestinians. Meanwhile, the anger , which argue that Netanyahu’s comments do not reflect the equality enshrined in Israel’s Declaration of Independence, now rings hollow. The declaration’s commitment to equality lost any virtue of relevance or meaning decades ago, compounded by legislation so overtly racist, it raises questions as to whether anyone can really believe such ideals are on the agenda of Israel’s leading politicians.

Like many other Jewish institutions, the Board is clearly in a bind, having spent the better part of a century scrupulously defending nearly every political decision Israel has made, all while ignoring almost 52 years of occupation. Such uncritical support of Israel is not only immoral, it shows how out of touch the Jewish establishment in Britain is with large facets the community, particularly amongst young people.

Like in the U.S., these decisions to remain silent on Israel’s increasingly incendiary politics are alienating to young Jews, whose commitment to anti-racism means bringing about an end to the occupation and promoting equality for all in Israel-Palestine. The Board’s silence on the most blatant forms of racism by Israeli politicians makes it clear who’s side they are on.

We must call out this silence and name it for a what it is: complicity in the continued support for the oppression of Palestinians, which has been allowed to flourish both in Israel and Jewish communities worldwide. Now is the time for young British Jews to fight for the moral future of our communal institutions — to unapologetically challenge the notion that Jewish security or supremacy is more important than equality.

What the leaders of the British Jewish establishment don’t seem to understand is that their silence is a political choice that contributes to the dehumanization of Palestinians in our community. It is this silence that denies Palestinians their human dignity by signaling that when it comes to Arabs, there is no real need to speak out against racism. It is a silence that says to Britain’s Jewish community that is legitimate to remain silent in the face of prejudice, as long as it isn’t happening to Jews. Perhaps Netanyahu is in good company.