Israel could learn a thing or two from the Kenyan High Court’s rebuttal of efforts to lock up asylum seekers. 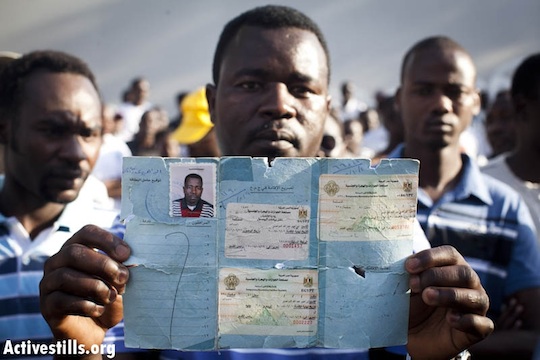 Ibrahim, a refugee from Sudan, holds a document given to him by the UN in Egypt, as he takes part in a protest held by refugees and activists outside the UN offices in Tel Aviv, June 10, 2012 (Oren Ziv/Activestills.org)

There are judges in Nairobi [1], and they are more courageous and much more familiar with refugee law than judges in Jerusalem.

A Kenyan court last month published a ruling on a government decision to round up asylum seekers from urban areas and put them in refugee camps, from which they will need permits to leave.

There are around 600,000 asylum seekers in Kenya. At the end of 2012, the Kenyan government published a new policy saying that asylum seekers will no longer be able to live in cities, that it won’t register their asylum claims in cities, and that they must take it upon themselves to relocate to refugee camps.

Human rights organizations and a number of asylum seekers filed a petition against the decision and the authorities, and the court issued an injunction against the implementation the policy until it could make a decision. (In Israel, the High Court allowed the administrative detention of more than 2,000 men, women and children, and isn’t rushing to decide on the question of the Anti-Infiltration Law’s constitutionality. It didn’t even cross the court’s mind to freeze use of the law until it ruled on it.)

Imagine the Israeli deputy attorney general’s Kenyan counterpart, standing with a frozen drink in her hand, urging her superiors to adopt various measures to make asylum seekers lives miserable in order to deter them from coming to Kenya. Imagine a Kenyan state attorney standing in court, screaming that ‘they’re all work infiltrators and not refugees,’ that ‘Kenya is the only developed country that shares land borders with Somalia and Ethiopia’ (from where most its asylum seekers arrive), and that the draconian measures ‘were written in order to prevent ‘infiltrators’ from setting roots in Kenya’s cities.’

The Kenyan court did not accept the authorities’ claims; instead, it ruled that concentrating asylum seekers in refugee camps was illegal. The court based its decision on Article 26 of the Convention Relating to the Status of Refugees, which guarantees freedom of movement for asylum seekers; it ruled that their confinement in refugee camps violates the convention and Kenya’s own laws. Additionally, the court explained that forcibly transferring asylum seekers to refugee camps is likely to encourage them to return to their home countries. Encouraging “voluntary repatriation” by Kenyan authorities, ruled the High Court, constitutes a violation of the basic principle of non-refoulement, established in the Refugee Conventions.

The ruling highlights the provinciality with which the Israeli Interior Ministry and state prosecution act. In countless legal proceedings, the prosecution has claimed that, “Israel is the only Western country that shares land borders with Africa.” It’s difficult not to break out into laughter when you hear the state prosecutor describe Israel as a “Western” country. The most preposterous part of the argument is the ignorance with which it relates to “Africa” as a whole, black, homogenous bloc that lies just beyond Egypt.

There are different countries of different types in Africa. The Interior Ministry and State Prosecutor are convinced that Israel is the only “Western” country in the region, and that all the other African countries are backwards, socially and economically. Therefore, it’s only natural that all of Africa wants to come here. Give me a break. It’s sufficient to look at Kenya’s developed economy, for example. It appears that Kenya, too, sees itself as “one of a kind in its region,” both on account of its greater economic development compared to other countries in the region, and its geo-political situation. It’s also enough to look at the ruling of its High Court.

In Israel, the courts are doing a slow-dance with refugee law that leads nowhere, practicing coitus interruptus whenever difficult, principled questions arise. The courts in Israel don’t rule on the basis of refugee law but rather on hunches (Hebrew). When they dare contend with international refugee law, the result is a ruling with a lot of un-authoritative language and with no courage to declare what the law is or explicitly tell the state to act in a certain way. The Kenyan court demonstrated that it is willing to reasonably and impressively analyze international refugee law, to take courageous decisions and to contend with the government in difficult cases that have far-reaching consequences for both its citizens and the basic rights of asylum seekers.

Could that happen here too? One can only hope.

[1] “There are judges in Jerusalem” is a famous quote by former Israeli Prime Minister Menachem Begin, which he jubilantly proclaimed upon receiving a favorable Supreme Court ruling regarding the creation of settlements. The quote, however, has come to mean that the rule of law should be respected, and is usually uttered in praise of a court decision by the party who has been vindicated or won.