A Zionist Union MK gets heat for saying not all Palestinians who use violence against Israeli soldiers are terrorists. Can attacks against uniformed soldiers be considered terrorism? 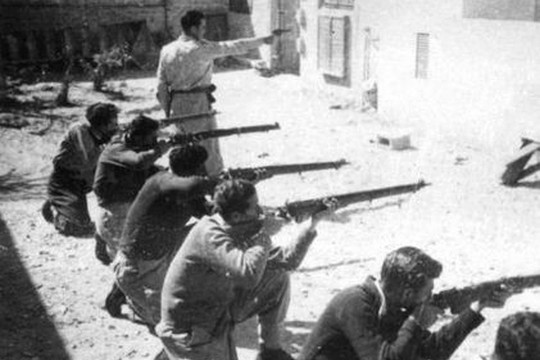 Etzel fighters training in 1947. (photo: Archive of Jabotinsky Institute in Israel/CC BY 2.5)

Labor MK Zohair Bahloul in recent days raised the ire of Israeli politicians from across the political spectrum, including members of his own party, for his unwillingness to label Palestinians who attack Israeli soldiers “terrorists.”

Explaining why he opposes applying the word terrorist to all Palestinians who employ violence, Bahloul brought up the example of the pre-state militias that took up arms against the British Mandate government.

“The Etzel (Irgun), the Lehi, the Haganah – all of these Jewish organizations went out to the streets to fight against the British mandate and its soldiers, to make your state – which has become an incredible state – a reality. Why can’t the Palestinians do the same?” Bahloul said on Saturday.

Using those Zionist militias as a short case study, here are a few ways to distinguish between acts of terror and guerrilla warfare:

– On May 9, 1939, seven Etzel members entered Jerusalem’s Rex Theater during a screening of Tarzan. They detonated a mine, killing five Arabs and wounding 18 others. The attackers managed to flee. In December of that year, Etzel members tossed a bomb into an Arab cafe in Jaffa. Six were killed.

– In May 1947, Etzel militants broke into Acre Prison and freed 28 incarcerated Irgun and Lehi members. During the operation, three Etzel members were caught. In order to prevent them from being hanged, the Etzel abducted two British sergeants. In July 1947, the three Etzel members were executed. The following day, the Etzel hanged the two sergeants.

Consider this a public service announcement to members of the Labor Party, whose attempts to ingratiate themselves with the public made them forget history, accepted terminology, and basic loyalty among friends.

Dr. Tomer Persico is a Post-Doctoral Fellow at the Elyachar Center in Ben Gurion University. He also teaches at the department for Comparative Religion in Tel-Aviv University and at the Schechter Institute in Jerusalem.