The message couldn’t be any clearer. Not only is the political echelon of Israel’s military establishment squarely opposed to the U.S. peace initiative, it actually feels such efforts are wickedly detrimental to Jewish citizens. 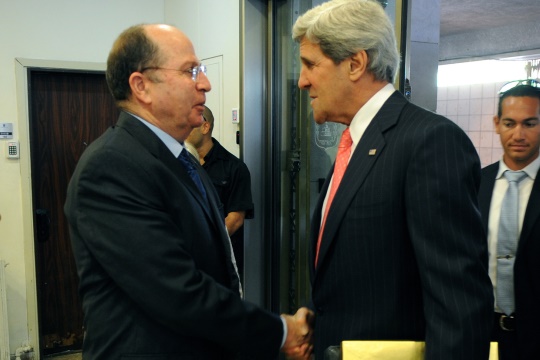 Moshe Ya’alon, the man charged with defending the State of Israel, was quoted by a major Israeli newspaper calling U.S. Secretary of State John Kerry “obsessive and messianic” on Tuesday.

He followed that statement up by telling a group of high schoolers: “they say time is working against us. We should not be alarmed by all kinds of fear mongering,” the “they” apparently referring to Washington and the “fear mongering” to “the peace process” that Kerry is so damn obsessed with.

Ya’alon put the cherry on top: “The only thing that can ‘save us’ is for John Kerry to win a Nobel Prize and leave us in peace.”

This of course created a mini diplomatic and media storm, with U.S. State Department spokesperson reprimanding Ya’alon, calling his comments, “offensive and inappropriate, especially given all that the U.S. is doing to support Israel’s security needs.”

Netanyahu was obligated to do something to fix the disaster that one of his top ministers and closest party members caused. But his statement did not actually include any kind of apology, condemnation or really any remorse at all: “the US is our largest partner and the partnership is founded on shared values and interests,” Netanyahu said.

“Even when there are disagreements between us, they are always substantive and not personal. We work in full co-operation with Vice President [Joe] Biden and Secretary of State Kerry to advance peace and security in the region. We stand firm regarding our own interests, while promoting the important connection between our two countries.”

The prime minister basically chalked it up to “a disagreement” and one that is “not personal.”

Not very convincing diplomatic damage control. But to top it off, after all that, Deputy Defense Minister Danny Danon got on his Facebook page and wrote: “Kerry will be arriving in Israel this week, I’ve already stopped counting the number of times, in order to continue to force an agreement on us. But there will be no compromises.”

I don’t think the message could be any more clear. Not only is the political echelon of Israel’s military establishment squarely opposed to Kerry, to the U.S. initiative and to the notion of altering the status quo of its military occupation, it actually feels such efforts are wickedly detrimental to Jewish citizens.

Ya’alon’s choice of words is also quite ironic, considering that “obsessive and messianic” are two words that could (and do) easily describe Israeli policy and its most formative politicians. In fact, “messianic” is precisely the term characterizing the core of the settlement movement that has garnered enormous strength since 1967 and is now a force to be reckoned with in the Knesset. And “obsessive” is probably one of the most appropriate adjectives to describe the lengths Israel’s entire ecosystem – legal, military, political, civilian, educational, environmental, archaeological, etc. –  has gone to over the years to ensure a well-oiled system of control over the Palestinian population and of segregation between Jews and everyone else, while somehow still claiming to be an “enlightened democracy.”

If facts on the ground in the West Bank and Gaza weren’t enough proof (i.e. regular destruction of Palestinian homes, preventing access to water, expanding settlements, enabling settler violence, etc.) Israel’s top defense officials are spelling it out for you: ISRAEL IS NOT IN THE PEACE-MAKING BUSINESS. The U.S. should take notice once and for all.