In declaring that there are no existential threats to Israel, the former defense minister joins a litany of current and former security officials who have spoken out in favor of the Iran nuclear deal. 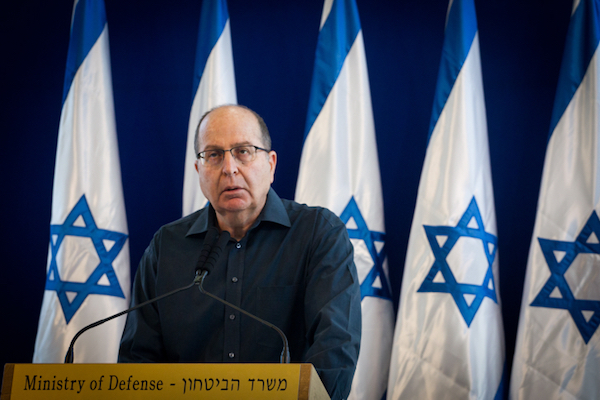 When world powers led by the United States signed a nuclear deal with Iran, American neoconservatives and other pro-Israel hawks were positively apoplectic. Mark Kirk, the Republican senator from Illinois who enjoys a consistent windfall of pro-Israel campaign cash, said that the deal was worse than the Munich agreement with Nazi Germany. The Wall Street Journal opinion page’s Bret Stephens actually used that as a headline: “Worse than Munich.”

In fairness, these hawks were just taking their cues from Israel itself. Israeli Prime Minister Benjamin Netanyahu has long regarded Iran as a second coming of the Nazis. He stated this unequivocally when the world was on the cusp of a nuclear deal—and defended the line of argument when it was criticized. That this notion would echo through rank-and-file right-wing Israel supporters in America should be no surprise: they have long been clear in their affinity for Netanyahu and his bankrupt worldview.

Oddly, however, Netanyahu’s tack seems to have always engendered more detractors in Israel itself — and not just lily-livered peaceniks. One hawkish figure, Netanyahu’s last defense minister Moshe Ya’alon, didn’t ever directly repudiate the comparisons of Iran to the Nazis but never made them himself. An eight-year member of Netanyahu’s Likud party, Ya’alon recently parted ways acrimoniously with the government. At a speech to this year’s Herzliya Conference (the “neocon Woodstock“), he delivered a blistering attack on Netanyahu and his rhetoric. Here’s The Washington Post‘s translation:

At this time and in the foreseeable future, there is not an existential threat to Israel. Israel is the strongest state in the region and there is an enormous gap between it and every country and organization around it. Therefore, it is appropriate for the leadership in Israel to stop scaring the citizens and to stop telling them that we are on the verge of a second Holocaust.

But Ya’alon didn’t stop there. He went on to more-or-less endorse the Iran nuclear deal. The Islamic Republic’s nuclear program, said Ya’alon, “has been frozen in light of the deal signed by the world powers and does not constitute an immediate, existential threat for Israel.” It’s hard to see how this latest statement could possibly stand in opposition to Secretary of State John Kerry’s defense that “the people of Israel will be safer with this deal.”

Ya’alon’s turn-around has been nothing short of stunning. Though eschewing comparisons to the Nazis, he was a vociferous critic of diplomacy with Iran. As Netanyahu pointed out in his rebuttal to Ya’alon, the then-defense minister called Iran an “existential threat” to Israel just four months ago. “One cannot express full confidence in the leadership when one is part of it and then say the complete opposite when you are outside,” Netanyahu said in response to Ya’alon’s latest remarks, according to the Post. “Therefore, no importance should be ascribed to such political attacks.”

But actually one can expect exactly that. When one is in government, one is responsible to higher authorities. A government official must toe the line — it is literally part of their job — or resign and speak out. In this case, Ya’alon followed orders until his relationship with the government ended. Only then did he give voice to his criticisms. Ya’alon’s announcement that he had his own political ambitions was an additional complication — see: the “political attacks” that Netanyahu referred to — but it does not obviate what he is saying.

After all, Ya’alon is not merely casting himself as an outsider of Israeli politics. Rather, he is joining a litany of current and former security officials who have spoken out in favor of the Iran nuclear deal. Dissent from Netanyahu’s anti-Iran belligerence can be found at the top echelons of the military and among other nodes of the security establishment. The list is not limited to individuals, either. Israel’s nuclear commission, a bureaucratic body of experts created to advise the government, has also endorsed the deal. And yet in the U.S., hawks ignore the mounting accumulation of these countervailing opinions.

It’s a remarkable show of intellectual dishonesty. Some neocons bristle at being called Likudniks — they think it smacks of dual-loyalty accusations — but until now it seemed apt. With even a Likud man like Ya’alon breaking with Netanyahu’s party, however, it might be said that, today, neocons are hardly even Likudniks; they’re pure Netanyahuists. There is nothing that can make them so much as even acknowledge criticisms of the Israeli prime minister, let alone accept those criticisms. They are showing, once again, that their neoconservative ideology is just as bankrupt as their idol Netanyahu.

Ali Gharib is a New York-based journalist on U.S. foreign policy with a focus on the Middle East and Central Asia. This article was first published on Lobelog.com. It is reproduced here with permission.