Holocaust Remembrance Day is usually the flagship event of Israel’s Holocaust museum, Yad Vashem. Although its traditional ceremony could not take place this year because of the coronavirus pandemic, the museum has offered digital memorial activities to do from home, and has also posted lectures, testimonials, historical videos, and other educational materials on its website.

But alongside these activities, the institution plays another role as a required stop for international leaders and public figures on official visits to Israel, as per the Foreign Ministry’s diplomatic protocols.

Over the years, this rule has brought to this memorial site some of the most despicable leaders in the world, including war criminals and perpetrators of crimes against humanity, whose very presence at its gates is a searing insult to the victims of the Holocaust.

A parade of criminals

A petition filed by attorney Eitay Mack on behalf of Prof. Veronica Cohen, a Holocaust survivor from Hungary, along with 65 other petitioners (including Mack himself), seeks to put an end to this disgrace. The petition, heard in early March before Justices Noam Sohlberg, Joseph Elron, and Alex Stein, calls for the Foreign Ministry and Yad Vashem to stop official visits of international war criminals, antisemites, racists, and those involved in or supporting genocide and the rape of women.

According to the petition, since the scandalous 1976 visit of South Africa’s apartheid Prime Minister John Vorster, a member of a pro-Nazi organization during World War II, many other dangerous and unworthy personalities have made official visits to Yad Vashem.

The list of people that have “honored” Yad Vashem with a visit includes a military delegation of Myanmar’s junta responsible for war crimes and crimes against humanity against the Rohingya; Brazil’s President Jair Bolsonaro, who has praised Hitler and explicitly supports the extermination of LGBTQI+ and indigenous communities, while supporting atrocities such as rape, torture, and military dictatorship; Philippines President Rodrigo Duterte, who has supported the bombing of indigenous schools; Hungarian Prime Minister Viktor Orbán, who supported Hungary’s antisemitic leader Miklós Horthy during World War II; South Sudanese Parliament Speaker Anthony Lino Makana, a senior official responsible for war crimes and crimes against humanity in the Sudanese civil war; and more. It is a long, dark, and dizzying list. The fact that such a petition is needed to exclude these figures from the national institution is striking enough; equally striking, however, is the response of Yad Vashem and the Foreign Ministry themselves.

Among other statements, Yad Vashem defended itself by asserting: “The administrative rules that petitioners seek to impose on Yad Vashem are contingent on the existence of an administrative authority, and since this does not exist at Yad Vashem, Yad Vashem does not constitute a party to the dispute under appeal.” In other words, it is the Foreign Ministry that decides who to bring on formal visits to Yad Vashem. We only follow orders. Don’t involve us.

Even more startlingly, Yad Vashem stated: “The reports and rumors presented throughout the petition concerning the involvement and/or alleged support of foreign officials in serious crimes under international law are not known to Yad Vashem and Yad Vashem cannot in any way corroborate or refute them.”

This is an incredible argument from a body supposedly dedicated to calling out human rights violations in general and antisemitism in particular.

When Yad Vashem hosted the Sri Lankan President Mahinda Rajapaksa in January 2014, did they really not know that he was accused by the United Nations of committing war crimes and crimes against humanity? Were they really unaware of Orbán’s antisemitic campaign against George Soros? Of Duterte’s admiration for Hitler? Of the slaughter of the Rohingya in Myanmar?

The Foreign Ministry’s detailed response to the petition is just as outrageous. Beyond the numerous legal pitfalls, two sections stand out in particular. In Article 33 of its response, the Foreign Ministry states: “Distinguishing between state personnel on the basis of an ideological position related to their actions, and determining who is appropriate or not to visit Yad Vashem accordingly, may harm foreign relations with those countries, and would prevent their leaders from participating in official visits to Yad Vashem. A diplomatic incident of this kind might even go beyond the limits of the particular matter and harm relations between the states in many other aspects (political, security, economic, etc.).”

In other words, according to the Foreign Ministry, visits to Yad Vashem are part of the package deal for the arms trades and foreign relations that Israel conducts with the worst regimes and leaders in the world.

As if that weren’t enough, the Foreign Ministry then makes another argument: “Contrary to the petitioners’ view as evidenced by their petition, the Respondent’s position is that the visit provides great moral and educational value for leaders who, for example, strive to subvert factual truths about their own countries’ actions during the Holocaust, forming alternative narratives, or are claimed to be involved in serious human rights violations. “

That is, after the Foreign Ministry has admitted that the visit to Yad Vashem is meant to grease the wheels of its business with tyrants, criminals, and antisemites, it now claims that this practice has educational value for these guests, too.

Indeed, Yad Vashem’s tremendous educational success was very evident when Poland’s President Andrzej Duda continued to alter historical facts to absolve his country’s involvement in the Holocaust (with Yad Vashem’s main historian, Dina Porat, taking an active part in this whitewashing). And it was certainly evident when Brazilian President Bolsonaro, immediately after leaving the memorial site, stated: “the Nazis were leftists.”

email
Before you go…
A lot of work goes into creating articles like the one you just read. +972 Magazine is nonprofit journalism, owned by many of our writers, editors, and journalists. In order to safeguard that independent voice, we are proud to count you, our readers, as our most important supporters. With your support, we can keep +972 Magazine a strong, independent, and sustainable force helping push the global discourse on Israel/Palestine.
DONATE
More About Holocaust 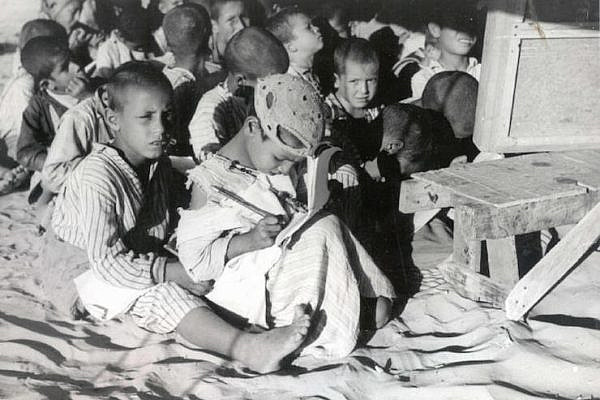 For Israelis the Nakba is a footnote. For Palestinians it’s the heart of the conflict
Israelis tend to view the expulsions of the 1948 war as a small, local affair that was quite restrained compared to the Nazi genocide. For Palestinians, it is an ongoing dispossession. By Sam Freed To large portions of the Jewish Israeli public, the Nakba was small event — an historical side note. To most Palestinians, on the…
By +972 Magazine May 26, 2019