Despite an astonishing surge to second place in the polls, chances of Yair Lapid making  an actual premiership bid are slim. He is risk-averse, lacks a political program, and his projected coalition is too fanciful to work. Lapid is much more likely to join Netanyahu’s next government, and the only question is: Will Lapid be Bibi’s pretty face in Washington as Foreign Minister, or will he be the Finance Minister, and therefore fall guy, for Israel’s upcoming austerity drive? 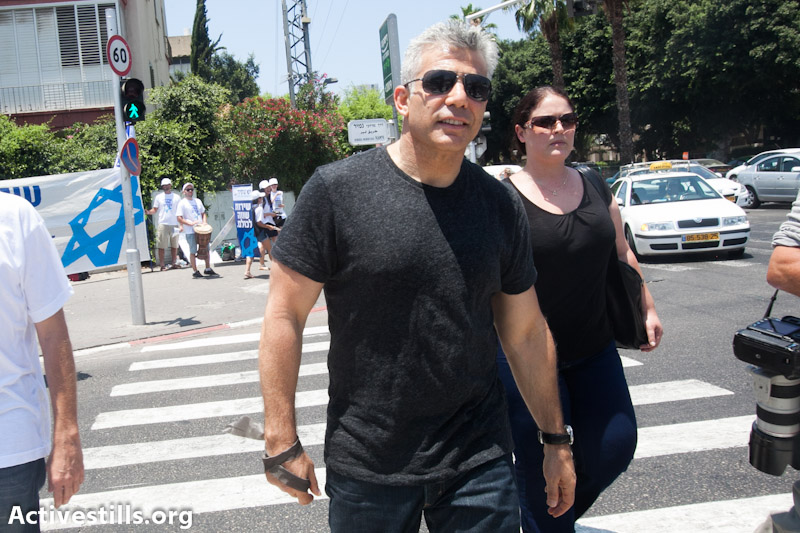 LIKUD VICTORY RALLY, TEL AVIV – After months of predictions for a comfortable right-wing win, Israel reeled tonight at a surprising near-gridlock between the “Right” and “Left” parliamentary blocs, with the Netanyahu-Liberman union barely scrambling past 30 seats, instead of the  42 they held between them in the departing parliament. But Netanyahu’s ratings were in steady decline ever since the union pact in late November and not least thanks his petty and paranoid attacks on settler leader Naftali Bennett.  The true surprise of the landslide vote was ultra-centrist candidate Yair Lapid. Lapid, a TV personality who avoided taking any remotely controversial stand on almost any issue, careened past rivals right and left to end up with 17 to 19 seats, rendering him the kingmaker of these elections. Bennett himself, the other golden boy of the 2013 elections, is currently forecasted to win 12 seats, a solid achievement but a far cry from the utopian poll projections of 15-19. Kadima, the centrist party that led Israel to wars in Lebanon and Gaza during its first term in the Knesset, and imploded in a series of ill-judged political manoeuvres at the end of its second term, has not made it to a third term at all, evaporating from Israeli politics with zero seats in the exit polls.

On the Left, Shelly Yacimovich doubled Labor’s seats but fell far, far behind her promise to oust Netanyahu or even to restore Labor as a significant force in Israeli politics. To add insult to injury, after making every possible effort to depoliticise and centralise Labor’s toxic brand, she was overtaken by an ad-hoc party led by a man who lacks any of the political structures, networks and traditional strongholds of Labor, but whose neutral and consensual public image made him more apolitical than she could ever hope to be. The great winner on the left side of the map is Meretz, raised from the dead by new leader Zehava Galon to go from three to seven seats; unlike Labor, Meretz never harboured illusions about premiership, so it can be content with its significant victory. Hadash, the only Jewish-Arab party running, is left with four seats, having failed to rejuvenate its front ranks and thus also failed to capitalise on the social justice movement in which its activists played a significant part (stay tuned for separate stories on social justice and Hadash tomorrow).

Theoretically (or rather, purely arithmetically), Lapid is now in a position to make a bold bid for premiership. Although earlier attempts to herd the centre-leftist cats into a unified bloc ahead of the elections failed miserably, the tantalisingly small gap between the Left and Right in the exit polls could give Lapid enough of a momentum – to hammer together a centre-left government of small parties, to persuade Shas to switch sides (by reminding them they’d hold much more sway in such a fractured coalition than in a strong right-wing one), and to solicit the external support of Arab parties (among which Hadash is usually lumped), eventually creating something akin to Rabin’s government in 1992. But, to the tune of “you are no Jack Kennedy,” Lapid is no Rabin, and 2013 is not 1993. Lapid is risk-averse and lacks a political program or vision; while the negotiated two-state process, a novel idea in Rabin’s time, has been tested and failed in the 21 years since. What’s more, hostility towards the Arab parties is immeasurably greater than it was in the 1990s. Any party overpowering the Right with these parties’ support will be seen as an usurper. Lapid may well launch a bid for premiership – but this is likely to be a negotiation ploy designed to mark him as not just a coalition member, but a partner in a “national unity” government, a title with considerably more clout and gravitas.

The more likely outcome, then, is a strong right-wing government with Lapid’s party as its safety belt and fig leaf. In such a scenario, Lapid can look forward to appointment as foreign minister, which would reward him with prestige and the limelight he is long accustomed to, and would reward Netanyahu with a telegenic, charismatic and unoriginal moderate face in the world arena. If Netanyahu sees Lapid more as a rival than a partner, however, he might offer him the Finance Ministry instead – a poisoned chalice if there ever was one. While a highly prestigious position and well in tune with (upper class) Lapid’s self-appointed role as emissary of the middle class, the Treasury is the least enviable fiefdom Netanyahu can offer anyone. Israel is facing an NIS 40 billion deficit and is poised on the brink of an austerity drive set to affect primarily Lapid’s own electorate; getting him to deliver the blow to his own crowd will neutralise him even more effectively than leaving him out of government. The same, with slight amendments, applies to Naftali Bennett and several other candidates; the Finance Minister appointment will tell us where Netanyahu sees the greater threat – from the Centre or from within the Right – and who he considers his most dangerous rival.

If she holds by her vow never to enter Netanyahu’s government (even if he offers her, say, the Finance Ministry), Yacimovich now has the opportunity to forge a combative and determined opposition. Such a move, if played patiently and committedly, will pay off with interest over the long term, especially in the wake of the anticipated austerity drive. This move can be impeded not only by tempting offers from Netanyahu, but primarily from within Labor – the most patricidal (or matricidal) party in Israeli politics. The knives will be out for the leader whose campaign was characterised by self-promotion and by a neglect, to put it mildly, of some of the strongest potential Labor candidates who came into the party of their own accord (Stav Shaffir and Merav Michaeli being the lead examples,) in favour of loyal but utterly lacklustre apparatchiks.

Tomorrow morning Israel will wake up to the real results fairly similar to the exit polls (despite the latter’s margin of error), and while a complete tie between Right and Left or a slight advantage to the Left can generate a modest momentum for an attempted leftist government, the right-by-centre-right coalition is the likeliest outcome. The only question is how tough a negotiator Lapid will prove to be – he could condition his entry into government on, say, complete exclusion of all ultra-Orthodox parties – and how protracted negotiations will be as a result. This might be more significant than a mere inconvenience: Israel is currently without a budget (Netanyahu threw down the cards on budget negotiations in the spring as pretext for gambling on elections) and is weighed down by a 40-billion-shekel deficit. Delay in putting together the team that will cover up that black hole will make the fabled Israeli stock exchange very antsy and drive a pin into Israel’s financial stability balloon – setting the stage for a much more heated contestation over economy, far from the Right’s familiar playing field.