Netanyahu’s Pravda – also known as Yisrael Hayom in some circles – let some public figures ask for forgiveness and repent on their paper ahead of Yom Kippur. I’ve chosen my three “favorites”.

Here’s what Arieh Eldad, a right wing extremist member of Knesset, had to say: “I’d like to ask forgiveness from the citizens of Judea and Samaria. My colleagues and I did not prevent the prime minister of Israel from freezing construction in the Jewish settlements for the past 10 months”.

Mr. Eldad, I hope – with G-d’s help – that you will in a few years time be asking forgiveness from all those settlers you pushed into Palestinian land, when they will be evacuated and see their homes and lives ruined – just as I hope you asked forgiveness from the settlers of Gush Katif, who are still struggling due to your extreme policies.

And here’s what MK Anastasia Michaeli, a comrade from Avigdor Lieberman’s Yisrael Beiteinu party, had to say:

” Yom Kippur is an excellent opportunity to ask forgiveness first and foremost from my family, my 8 children and my beloved husband, who unfortunately do not get as much attention as they should”.

Maybe, Anastasia, that’s because you spend your days in the plenum teaching us what democracy is all about. For example, by attacking fellow Knesset members.

Based on this video, where you’re seen being held back by others before you strangle Arab MK Hanin Zoabi (Balad), I have a pretty good idea who you could ask forgiveness from. But there are probably better chances of me fasting on Yom Kippur than you doing that…

And last but not least, my favorite bearded racist of all times (second only to his mentor, Rabbi Ovadia Yosef) – Interior Minister Eli Yishai. After deciding to deport 400 children of foreign workers, a-la-Sarkozy-gypsy-style, I actually was naive enough to hope he was going to show some heart. 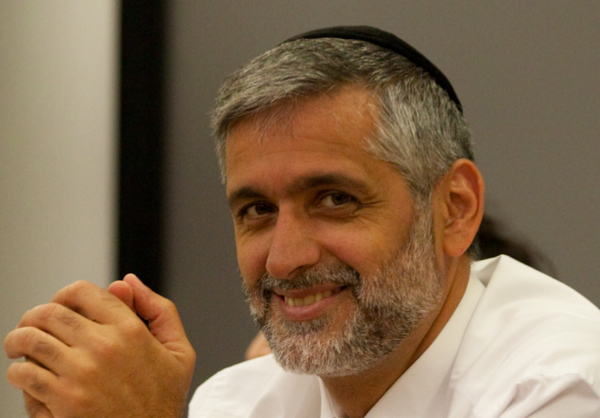 “I want to ask forgiveness from all the people of Israel, from each and every one who saw himself hurt from anything that I said…

A different forgiveness is the one that should be asked by the foreign workers from the children, first of all their own children, that they hurt during the last campaign against the law passed by the government of Israel. They should apologize for using them for their own purposes, and maybe even for causing them mental damage and severe trauma. They should also ask forgiveness from their families abroad. They have father and mothers and sisters and brothers that they abandoned there and now they must go back to them”.

Oh, Eli, Eli, Eli. Ya think? It’s like you’re on another planet.

You should be asking those kids for forgiveness. But do me a favor: Don’t! Spare them having to thank and shake the hand of a backward, primitive man like you. Heck, maybe letting them leave this place, this state that you and your likes are turning into a fascist state, is the best thing that could have happened to them.

I wrote this post on Yom Kippur. Forgive me.