Young Tunisians on social media extol a video of Rabbi Hattab comparing the tolerant atmosphere between Jews and Muslims in Tunisia to the hostile one in France, where his son was murdered by terrorists last week. There is, of course, some romanticizing going on.

“Tunisia is bereaved!” read the main headline on the front page of Sunday’s Le Temps, a French-language newspaper based in Tunis. Three of the people shot to death in Friday’s hostage-taking at a Parisian branch of the French kosher supermarket chain Hyper Cacher, were Tunisian citizens. One of them was Yoav Hattab, the 21 year-old son of the main rabbi of Tunis. Hattab, who was in Paris to complete his graduate studies, was a patriot: in a photo on the front page of Le Temps, he grins proudly while holding up a blue-inked index finger, proof that he had voted in his country’s first democratic election following the 2011 revolution.

(Rabbi Hattab has been widely described in French-language media as the chief rabbi of Tunisia’s small Jewish community.) 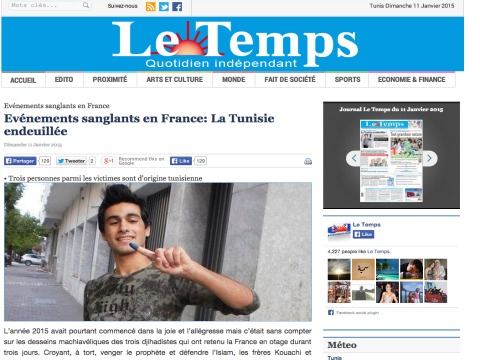 In its report, Le Temps quotes witnesses who describe Hattab as a hero. Not only did he direct some women to safety in the cold storage room, where a Muslim employee from Mali protected them, but he also grabbed one of the weapons belonging to Amedy Coulibaly, the terrorist who stormed the supermarket, and tried to shoot him down. But Hattab didn’t have time to release the safety catch on the weapon before Coulibaly spotted him and shot him dead.

For young Tunisians on social media, Hattab has come to represent their hopes for their country. They are sharing and quoting a France 2 television interview with Rabbi Benjamin Hattab, the dead man’s father, in which he speaks passionately of the easy, mutually respectful relationship between Jews and Muslims in Tunisia. In contrast, he says sorrowfully, the atmosphere in Paris felt so hostile toward Jews that his son called him to apologize for being unwilling to run the risk of wearing his yarmulke in public. It was too dangerous, the young man told his father the rabbi (Haaretz reports that Yoav visited Israel this year, on a Birthright tour).

Shared many times is this excerpt from the interview, when Rabbi Hattab says emphatically, “”Les juifs sont respectés en Tunisie, on n’a pas de problèmes avant et après la révolution” (Jews are respected in Tunisia, we had no problems either before or after the revolution”).

Bearded, wearing a yarmulke and speaking in a voice made gravelly by exhaustion and grief, Hattab sits in the Paris television studio opposite Latifa Ibn Ziaten, a Moroccan-born French woman who wears a traditional Muslim headscarf. He describes his son as a young man who lived his life joyfully and with respect for his Jewish heritage. He only happened to be at the grocery store that Friday because he had been invited for Shabbat dinner and his father had taught him always to bring a bottle of wine as a gift for his hosts.

Mrs. Ibn Ziaten listens, her expression deeply sympathetic. Her son Imad, then a 30-year-old career soldier in the French army, was killed in 2012 by a French citizen who had become a radical Islamist. In March 2012 Mohamed Merah went on a shooting rampage starting with Imad Ibn Ziaten, whom he shot at point-blank range after the paratrooper refused to kneel down. Merah killed seven people altogether, including three children at the local Jewish school.

Addressing Rabbi Hattab, the soft-spoken bereaved mother, who has become active in combatting extremism in France, offers her condolences. She describes her own loss and then ticks off her French credentials: she has lived in France for 38 years, was educated there, feels absolutely and proudly French, but she still experiences prejudice because of her Muslim headscarf. And then she launches into a passionate speech about making the country a better place “because there is no other country like ours.” With Hattab nodding and making sounds of agreement, she talks about the importance of protecting France’s liberty, of making it a better place for its young people, of tolerance and acceptance, and so on. “We must get to work,” she says, “because there’s nothing like the liberty we have in France.”

Tolerance for the French, patriotism for Tunisians

It’s quite an extraordinary scene. Two very dignified French-speaking North Africans, one Jewish and one Muslim, both made bereaved parents by Islamist terrorists — one because his son was Jewish, and the other because her son was a Muslim who served in the French army — both speaking about their shared respect and love for France and its values.

For French television, the image of the bearded rabbi and the Muslim woman in headscarf and the words of co-existence, empathy, and national solidarity expressed by Rabbi Hattab and Mrs. Ibn Ziaten probably seemed like the most important message to convey. But for young Tunisians on Facebook and Twitter who shared the clip of that interview, the important bit is where Rabbi Hattab compares the tolerant atmosphere between Jews and Muslims in Tunisia to the hostile one in France. Yoav Hattab is their hero not only because he died trying to take down a terrorist, but also because he was both a patriotic citizen of Tunisia and a proud Jew. And his father the rabbi is their prophet because, while clearly in anguish over the death of his son, he is still able to speak movingly about his love for Tunisia and the good relations between its Jewish and Muslim citizens.

There is some romanticizing and wistfulness here. For many young Arabs who supported the Tunisian and Egyptian uprisings in 2011 and 2012, the exhilarating act of rising up against authoritarian leaders, and feeling a sense of agency over the future of their country for the first time, made them nostalgic for a multi-ethnic country that disappeared two generations before they were born. On social media they shared old black-and-white photos of a cosmopolitan, multi-ethnic society where Jews and Muslims socialized at cafes and at the beach, the women wearing sleeveless dresses and stylish hairdos. They referred to books and films that make it clear Jews were prominent members of the political and economic elites. When I was in Cairo in 2011, people asked if I had read Andre Aciman’s Out of Egypt, or Lucette Lagnado’s Man in a White Sharkskin Suit, both memoirs by Egyptian-born Jews who were forced to emigrate in the 1950s and 1960s. The books were prominently displayed at Diwan, the posh Zamalek bookshop-cafe that sells English-language books.

Nostalgia for a bygone era

The subtext in all this longing for an imagined lost world was that once, before despots took over for the departing colonial powers and before Zionism destabilized the regional ethnic balance, Jews had been an integral part of the Arab world. This is not an inaccurate narrative, but it is somewhat over-simplified.

The nostalgia for that old world is shared primarily by secular, multi-lingual, urban millennials. On Twitter and Facebook these Tunisians in their 20s and 30s have posted angry comments about their government’s failure to issue an official statement regarding the Jewish citizens who were killed in Paris. Quite a few have noted with contempt that only the Islamist Ennahdha Party has extended condolences to the bereaved families. Yamina Thabet, president of the Tunisian Association for the Support of Minorities (ATSM) and a friend of Yoav Hattab’s, told a journalist for the French daily Libération that the authorities’ silence was “hallucinatory.” “He was an extraordinary person,” she said of Hattab.“This is an enormous loss.”

So far, 3,600 people have indicated on Facebook that they will attend a memorial for Hattab, to be held January 17 on Avenue de la Liberte in Tunis, opposite the Great Synagogue. Called “Je Suis Yoav Hattab,” the event’s description is as follows (my translation from the French):

Yoav Hattab is a Tunisian patriot, the son of the chief rabbi of Tunis, originally from la Goulette [a suburb of northern Tunis – LG], killed in Paris by terrorists who took hostages at the Hyper Cacher grocery store. Yoav Hattab did not have French nationality. The only nationality he held was Tunisian. Let us honor him. Next shabbat we will gather together. Bring candles to light for the deceased. We will light them at 6.11 p.m. [after shabbat ends] in memory of Yoav.

The Israeli media has reported that the four Jewish men who were murdered at the Hyper Cacher will be buried in Jerusalem. But according to “Info du Jour,” a French-language Tunisian news site, Tunisia’s ambassador to France has confirmed that arrangements have been made to transport Yoav Hattab to his home country for burial. For the Tunisian millennials who have spent the past three days sharing photos of the young man with his blue-inked finger, and of another one that shows him wrapped in a Tunisian flag with a yarmulke on his head, this is simply the way it should be.

Update: According to a press release issued by the Israeli Prime Minister’s Office, all four Jewish victims of the market attack were to be flown to Israel for burial on Tuesday.

Correction: A previous version of this article carried the headline, “Yoav Hattab, son of Tunis chief rabbi, died a Tunisian patriot.” It was changed to reflect that Rabbi Hattab’s position as the main rabbi of Tunis’s small Jewish community is not officially a “chief rabbi” position.