After visiting Tuba Zangaria yesterday, I think I have a hunch why the “price tag” arsonists chose this village, of all Israeli Arab villages, as their latest target: The largest building in town, much larger than the mosque they torched on Sunday night, is the Yitzhak Rabin Sports Hall. (I was meaning to be facetious, but who knows, maybe there’s something to this.) 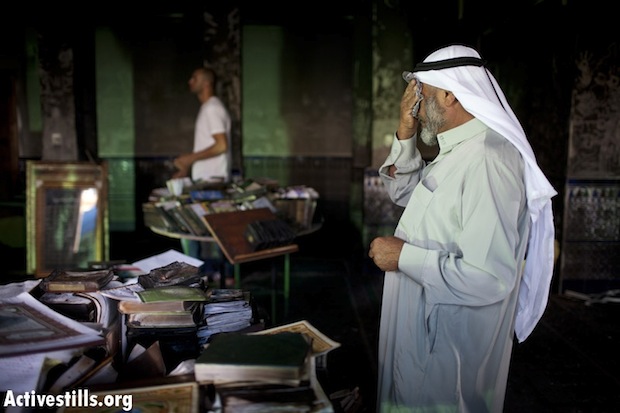 Locals survey the damage of the attack on the Tuba Zangaria mosque (photo: Activestills.org)

These Jewish Klansmen really succeeded in striking at the heart of the nation’s enemy this time. “In 1946, the men of the al-Heib [Bedouin] tribe in Tuba founded ‘Palheib,’ which fought shoulder-to-shoulder with the Palmach. We were among the founders of the State of Israel,,” said Mohammed al-Heib, the Ministry of Education’s supervisor for Bedouin schools. Speaking to Rabin’s sister Rahel and dozens of other Israeli Jews sitting with locals in the mourning tent outside the mosque, el-Heib said the village named its sports hall after Rabin “because we don’t forget our friends.”

As in many Galilee Bedouin towns, the boys here commonly enlist in the IDF, he said. When the October 2000 riots broke out in Galilee, village leaders decided that Tuba Zangaria would not take part.

Inside the blackened mosque, still pervaded by the smell of smoke, I asked the 30-year-old imam, Fuad Zangaria, how he felt about Israeli Jews after the arson attack, then the visits by Shimon Peres, the chief rabbis and so many other Jews. The imam said he felt no different about Israeli Jews than he did before. “We are the only Arab village in the area. Next to us is Rosh Pina, Hatzor, Mahanayim, Elifelet, Kfar Hanasi. All our neighbors are Jews, and we’ve always had friendly, cooperative relations with them. Since this happened, they’ve been with us from morning til night. Whoever did this horrible deed wanted to destroy the relations between us and our neighbors – and I want to tell them it’s never going to happen. This will only make our friendship stronger.”

Before leaving, the Jewish visitors, many of them religious, went up to the villagers in the mourning tent and personally apologized for the abomination at the mosque. It was the day before Yom Kippur. Their hosts in Tuba Zangaria wished them gmar hatima tova, may you be inscirbed in the Book of Life,