“It was different with Papa. He celebrated all the major holidays — Yom Kippur, Rosh Hashanah, Pesach — and he loved telling me Bible stories, but religion didn’t have a very important place in his life. Once, during Mama’s illness, I asked him if he believed in God. He gazed at me with that tender look, a look that spoke only of the powerlessness of love, and said, “You know, Sara, God doesn’t need us to believe in him. All he wants is for us to act as if he were there.”

— from Paths of Desire, a novel by Emmanuel Kattan

Yom Kippur is one of the two Jewish holidays that have become well-known tropes for the universal human experience in secular European and American art. Passover is the other one — specifically the seder meal, which includes so many symbols that can be interpreted ecumenically to talk about hunger, freedom, welcoming the stranger, telling the story of the Exodus to the children, justice and so on. But while the seder is about reaching out to include others (“all who are hungry, come and eat”), Yom Kippur is about introspection, repentance, forgiveness and redemption.

Parts of the liturgy are beautiful and have inspired some moving art, especially poetry and music. There’s Max Bruch’s gorgeous cello and orchestra composition of Kol Nidre, the Aramaic recitation that opens the evening service of Yom Kippur.  (My mother was a huge fan of Jacqueline Du Pre’s interpretation.) Bruch was a Protestant who died in the 1920s, but the Nazis banned all his music anyway, for his sin of having composed a work based on a Jewish theme.

In more recent popular music, songs based on the liturgy include greats like Leonard Cohen’s “Who By Fire,” referring to the part of the service where congregants sing the prayer derived from the tradition that on Yom Kippur it’s written in the Book of Life: Who will die this year and how — by fire, by sword, by water..?  Barbra Streisand’s Avinu Malkeinu (Our Father, Our King) is a straight rendition of one of the high points in the liturgy, rather than an interpretation like Cohen’s. In the clip below, Cohen explains in a 1979 interview how the Hebrew prayer inspired “Who By Fire.”

In the movies, Kol Nidre is a trope for redemption via the return of the prodigal son. In The Jazz Singer (1927), Hollywood’s first feature film with sound, Al Jolson plays Jakie Rabinowitz, the rebellious son of a cantor at a synagogue on New York’s Lower East Side, who runs away from home to become a Broadway singer, adopting the “goyisch” name of Jack Robins. But years after cutting himself off from his family, community and religion to pursue a career on stage, the wayward jazz singing son returns to the Lower East Side synagogue of his childhood to sing the Kol Nidre service in his bedridden father’s place. The moment of redemption comes when his mortally ill father hears his son singing from the synagogue next door, smiles beatifically and says to his wife, “We have our son back again!” before collapsing and dying. 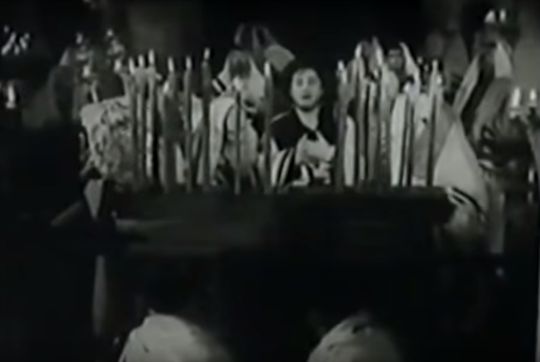 Really my favorite film on the theme of the prodigal Jewish son redeeming himself on Yom Kippur is Ode to Glory. It’s a 1939 Yiddish film, produced in the United States, that stars Moishe Oysher — the superstar, Russian-born Yiddish actor, cantor and heart throb. Set in Vilna* (Vilnius), the film’s opening scene takes place at the Vilna Synagogue, where Oysher is leading services on Rosh Hashanah. Among the congregants are two fashionable men from Warsaw. Stunned by his talent, they lure him away from provincial Vilna to the big city, where he become a star of the Warsaw Opera. But the glittering metropolis chews him up and spits him out, sick and exhausted. In the final scene Oysher returns to Vilna on the eve of Yom Kippur and staggers along the narrow, cobblestoned street to the synagogue, where Kol Nidre has just begin. He enters and uses the last of his strength to sing what’s probably the most incredible rendition of Kol Nidre ever recorded — and then collapses and dies on the bimah (podium). The rabbi leans over Oysher’s body and tells him he can “sleep peacefully,” because “for generations and generations, people will remember that for them you sang; and for us you prayed.” Again, redemption and death. “Who shall live and who shall die.”

When I was little we attended a Conservative synagogue in Canada, which was a big family and community event. I think my parents fasted, but my grandparents did not. They’d take us kids for lunch at the White Spot, a popular Vancouver chain that served diner-style food. There we’d meet many other grandmothers from the Hadassah group, who’d brought their own grandchildren. I enjoyed the communal feeling and the rituals, but we never talked about God or faith in my family.

In Israel the 25 hours of car-free roads seemed like terrific fun at first. I marveled at the post-apocalyptic feeling of walking in the middle of a car-free four-lane highway, surrounded by strolling families and children on bicycles. But after a few years the novelty wore a bit thin. This was especially the case after I moved to a mixed Arab-Jewish part of Jaffa that was still working class and ungentrified. Everyone got along, but there was a little underlying tension that came out on certain holidays, like Yom Kippur. The Muslim neighbors expressed their resentment at having the enforced silence of a holy day not their own imposed on them by turning on their stereos and flinging their windows wide open. The Jewish neighbors would yell at them in outrage and pretty soon there’d be a screaming match that could be parsed as “whose country is this, anyhow?” A friend who biked over from silent, all-Jewish north Tel Aviv remarked on the tension in amazement. “It’s as though they’re saying ‘go to hell with your colonial holiday,’ isn’t it?” she said.

And neither of us forgot that the army put Gaza and the West Bank under total closure on Yom Kippur, meaning that all the checkpoints and crossings, including Allenby, were closed. So Palestinians could not enter or leave the West Bank or Gaza — even if they had, say, permits to leave and travel plans to go abroad on personal business via Amman Airport.

Anyway, all the politics and injustice sort of spoiled my Yom Kippur peace and introspection in Israel. I started to understand my friends who spent the holiday in Europe or on a beach in the Sinai. Now I’m in Brooklyn and have returned to my childhood habit of attending synagogue on the holiday. And I enjoy it. But I’m a bit of an outlier among friends who were raised in secular Israeli families. They don’t get the synagogue thing at all and can’t relate to the liturgy one bit.

*For more about pre-war Vilna, see Lucy Dawidowicz’s extraordinary memoir “From That Place and Time,” about what she saw and experienced while living there as an American student of the Yiddish language at YIVO from 1938-9.