A worldwide consortium of civil liberties groups just published new report, ‘Lethal in Disguise,’ on the health consequences of crowd control weapons, in which Israel features prominently. +972 Magazine speaks to one of the editors about how Israel fares compared to the rest of the world. 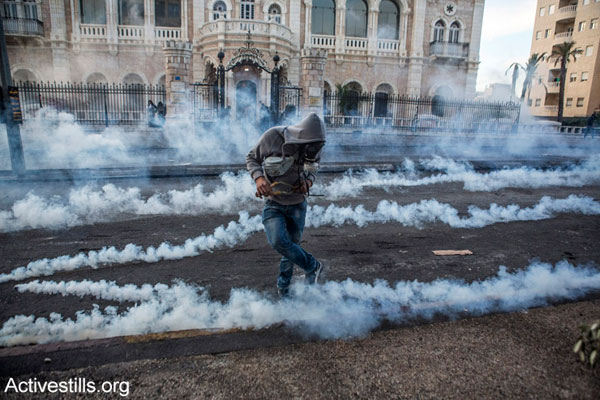 A Palestinian youth kicks a tear gas canister during clashes with the Israeli army in the West Bank city of Bethlehem, November 20, 2015. (photo: Activestills.org)

An increase in popular protests worldwide over the last few years, coupled with the growing militarization of police forces around the globe have created a booming industry for crowd control weapons. Yet international regulations have failed to keep up, and the marketing of these weapons as “less lethal” means that they are frequently misused, causing injury, permanent disability and death.

Israel-Palestine, where the use of such weapons is a near-daily occurrence, features prominently in the report.

+972 Magazine spoke with Association for Civil Rights in Israel (ACRI) attorney Anne Suciu, who was one of the editors of the report, a collaboration of Physicians for Human Rights (no relation to Physicians for Human Rights—Israel) and the International Network of Civil Liberties Organizations shows, to find out more about how Israel is faring in the realm of crowd control.

When researching the report, did you get a sense of how Israel compares to the rest of the world in its use of crowd control weapons?

After the initial research done by Physicians for Human Rights, when we looked at the chart with the list of different kinds of weapons (kinetic impact projectiles, chemical irritants, water cannons, acoustic weapons and disorientation devices – nr), the first thing we saw is that Israel is using all the weapons mentioned in the report and many others.

There is quite a flourishing industry of crowd control weapons here, and it’s very important to mention it’s not just the West Bank — they’re used by the police for any demonstration, including the Ethiopian-Israeli ones last year where they used skunk (a powerful water jet with a foul-smelling liquid added – nr), water cannons, tear gas and shock grenades. What about accountability for the use of all these weapons? How is it regulated in Israel-Palestine?

You can never know what the police are using, how they’re using it. According to their internal procedures, every time these weapons are used the police need to make a report of how, why, and what weapons were used by whom. ACRI always asks for the reports and never gets them. According to the police’s own procedures, the use of force for crowd control is actually heavily regulated, but they are not following these regulations.

The use of skunk is one example of this. It was used at the Ethiopian demonstration in Jerusalem; it’s supposed to be brought out only when there’s a severe threat, but they used it right at the start.

Is the skunk used elsewhere in the world?

The skunk is an Israeli invention. Other people involved in the report were shocked by it: for them it’s pure punishment. Why would you add smell to the water unless you want to punish the whole area (where a protest took place) for days?

We had debates on the recommendations to put at the end of the report and on the skunk there was complete consensus that it’s the one thing that should never be used.

The police started using black sponge-tipped bullets a couple of years ago, which have been causing a lot of serious injuries. Can you tell us more about them?

Sponge-tipped bullets are supposed to be used only when arresting someone that is violent, or to take a violent person out of a demonstration. It is not supposed to be a crowd control weapon, but we see again and again that they are fired indiscriminately towards crowds, and that is how they keep hitting people that have nothing to do with the demonstrations. The regulations say they are not supposed to be fired at children or the upper body. 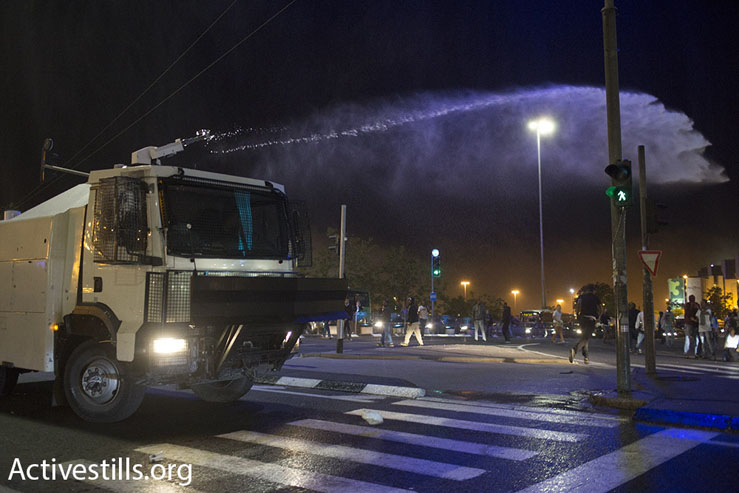 What about the procurement process for these weapons? Is there any transparency about when and what new weapons are going to be introduced?

There is no regulated and public process of how to acquire new weapons in Israel. In other countries you have a very careful procurement process, and it’s public. For example, in England the police don’t use any crowd control weapons, they go to a demonstration without anything. A year ago the police said they needed water cannons, and it turned into a huge issue — NGOs weighed in, parliament held debates. Home Secretary Theresa May eventually vetoed bringing in water cannons.

Nothing like this would happen in Israel. We just suddenly see on the ground that the police are using a new kind of sponge-tipped bullet.

Also, we also don’t know which tests the weapons underwent, what the results of those tests were. Often the police just rely on the tests done by the manufacturers, which are largely private companies.

So we can’t know what the results of the tests are? Or the technical specifications of the weapons?

To give you an example, ACRI requested the regulations for the black sponge-tipped bullets and all the technical information — speed, accuracy, etc — had been redacted from what the police sent us. They say it might cause the manufacturer commercial damage, which is incomprehensible.

And funding? Do we know how much money is spent on acquiring these weapons and how the funds are distributed?

Nothing is clarified. The procurement process, where the money comes from, how much it costs. But for example, if 40,000 sponge-tipped bullets were fired in East Jerusalem in 2015, and each bullet costs around $20, you can do the math.

So where does all this leave Israel?

Israel is doing very badly at every stage — before, during and after the use of weapons. The police investigation unit is closing cases into the use of sponge-tipped bullets even when children have been seriously injured because they have no idea who fired the bullet, because they’re not compiling the reports they’re supposed to. So there’s no accountability.

Also, Israel is a very extreme example of the use of crowd control weapons — not just because of the amount of weapons that are used, when they are used, and that they cause death again and again, but also the fact that there is no right to protest in the West Bank. In other countries you are allowed to have peaceful protests, but in the West Bank you cannot. And not all the weapons Israel uses for crowd control in the West Bank are “less lethal.” The report editors talked about rubber-coated metal bullets, which although Israel banned their use inside the Green Line, are still widely used in the West Bank. They are not less lethal — they are lethal. They are like live ammunition.

And globally? What’s the next step?

We are seeing more and more crazy inventions that are spread all over without any regulations. International weapons protocols only cover weapons that are used in warfare. For example, the Chemical Weapons Convention doesn’t cover tear gas, even though it is a chemical weapon.

We submitted our report to the UN Human Rights Council in Geneva last week, where the special rapporteur also provided their own report on managing demonstrations and protests. We are waiting to see if they will adopt our recommendations.