Last week’s Friday protest in the West Bank village of al-Ma’asara, against the separation wall and the occupation, featured a group of special guests out to highlight the absurdity of all forms of repression.

All guns are oversized, but this one seems especially large and it is pointing straight at me. I stroke its end soothingly with my red nose. Clucking like a quiet chicken, I walk as low as possible and try to cross the arbitrary line of soldiers repressing the freedom of movement and speech of the residents of al-Ma’asara in the West Bank. A soldier pushes my head. I fall back hyperbolically and bump into another protester. I look up, wink at the protester and resume my attempts at crossing the ranks between their legs. At some point I’m pulled up by my shirt. Getting arrested as a clown, oh yeah! I am surrounded by soldiers and melt on the asphalt. Inspired by the Clandestine Insurgent Rebel Clown Army, I choose not to comply and desperately continue to behave like a hen. 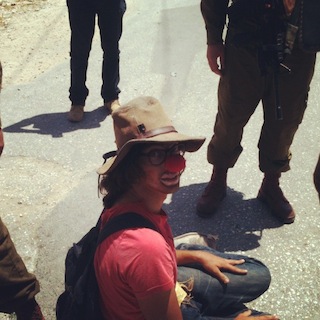 “You want violence?” says the commander, “Just come with me if you don’t want violence.” Cameramen and protesters gather around. I’m shaking. I put on a scared face on and accentuate the shaking. “You have no reason to arrest him, you cannot arrest this clown!” Guy, a superhero clown friend, says to the commander, “All eyes are on you.” The soldiers are confused. Clowna arrives as a Bird of Eden. We start singing in gibberish to the rhythm of the samba and blend back in the demo.

There are nice expressions in Arabic – i-dinia hilwe umurra (the world is bitter and sweet), and i-dinia ‘isr uyiser(the world is difficulty and ease ) – that express the dichotomies we dance with in our activism against the occupation and capitalism. Consider, for example, that Palestinians in South Hebron Hills spend 50 percent of their income on water because the Israeli army and settlers demolish or poison their wells. Water in the Wild South costs Palestinians eight times what it costs my family, yet there is still somehow enough water to make ultra-sweet chai for everybody.

Last Friday, the weekly al-Ma’asara demonstration against the wall and occupation and land exploitation was filled with clowns. The bitter noseless clowns with the uniforms and big oversized weapons on one side and the sweet clowns on the other side, like Muhammad of Jenin with green curly hair and a harmonica and a silly accordion, and like Clowna di Isawiyye, with her candid smile and wild eyes and two long black braids. Muhammad is in charge of student activities at Bir Zeit University. He is one of Arna’s Children who has somehow not gone tragic, and he says he used to live in the same building as Juliano Mer-Khamis. The Freedom Theatre in my mind is one of those magical dream places where people find life through the appropriation and elevation of oppression. When Muhammad was five years old, his father left home in Jenin and settled in Haifa. At age 25, Muhammad contacted him through Facebook. Itamar, a real sweet hero, told me about their reunion. Apparently, the father sent Muhammad a Haifa taxi to pick him up from Jenin. Imagine the Israeli cab driver zigzagging his way into the refugee camp to take a lad with a green ID, without a permit, during the Second Intifada. When Abu Muhammad met Muhammad he embraced him and cried. Muhammad reacted coldly to his father who had left his family to misery and war and overdramatized a strange encounter. But at the Friday Ma’asara demo, Muhammad’s bitter family history is engulfed by his sweetness, his childish sincerity, his musical propensity and clown intensity. He hypnotized hordes of sugar-crazed kids with stories about Kings and Queens and Wazeers and was a revolutionizing subversive force at the demonstration. It’s time we all pull out our red noses. 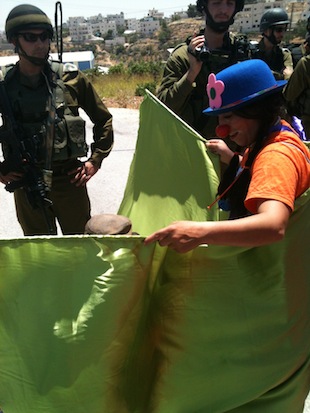 Clowna di Isawiyye is a heroine the likes of which are rarely seen even in our blessed circles. The first thing she did upon entrance to Itamar’s car was pull off her Hijab with a whole-hearted sigh of relief. She said she just wore it for her parents. Clowna is a mother to three sweet kids. I haven’t met them, but she sings terrifically. Lack of logical sequence intended. When her husband divorced her she went into the bedroom, jumped on the bed and yelled “Hurriyye, hurriyye” (“Freedom, freedom!”) May we see her again, in times of difficulty and ease alike.

It was a sweet day for me, a day of healing protest succeeded by relaxation with friends followed by relaxation alone followed by a Kiddush against the Kibbush for Shabbat in which we prayed – or something of the kind – for more relaxation for us all in the bitter landscape of occupation.

For others it wasn’t as sweet. As Israeli comrades are being restricted right and left, international activists are facing increasing deportations and arrests. In Nabi Saleh there’s a gas station uncomfortably situated above the weekly demonstration. When teargas and rubber-coated steel bullets begin to fly, people run, of all places, to seek refuge next to that gas station. An Italian activist was apparently arrested while taking a leak in the bathroom of that time-bomb-station. I heard that a New York Times journalist was detained. “Didn’t you tell them you’re a journalist?” Irene asked him on the phone. Still detained, he answered, “I think my exact words were: I’m a FUCKING journalist!” 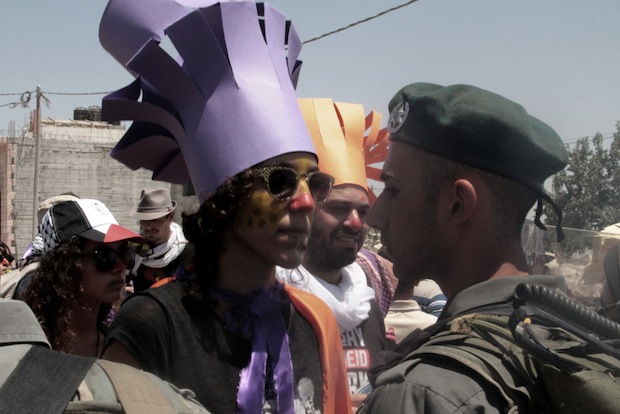 “Are you demonstrating or decorating?” someone commented on Irene’s Twitter feed. If we’re not choking on teargas it’s not resistance. In the face of such bitter comments the importance of clowning emerges. Not only do clowns ridicule soldiers, policemen and all authoritative repression, they also challenge activist preconceptions. The clowns are the sugar in the chai of resistance. But who am I to pontificate, just a silly chicken-monkey-clown unsuccessfully attempting to subvert journalism through reckless structureless style, or maybe trying to redeem and heal myself and maybe hopefully others from death-decay-dejection, or perhaps something else altogether.

Amitai Ben-Abba is a Ta’ayush, Anarchists Against the Wall and Yasamba activist from Jerusalem. He runs a blog and sells watermelons at a basta.