In between truth-dodging and trolling Senator Tom Cotton, Iran’s foreign minister, speaking Wednesday in New York, displayed an impressive command of colloquial English and contemporary American culture. And no, Netanyahu was most certainly not spared his wry sarcasm. 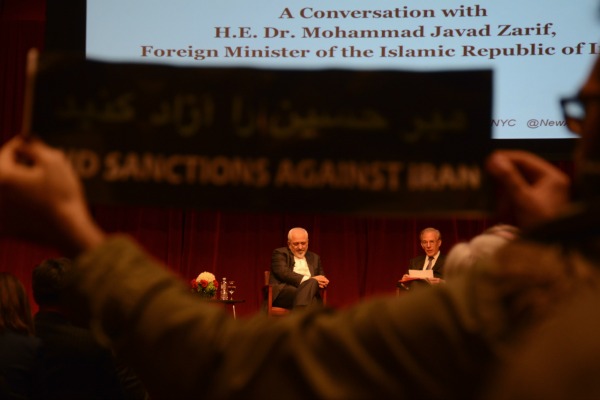 “It is laughable,” he said, “that Netanyahu has become everyone’s non-proliferation guru. He is sitting on over 400 nuclear warheads that have been acquired in violation of the NPT [the Nuclear Non-Proliferation Treaty, to which Iran is a signatory, and Israel isn’t].” And, he added, we know “who violated protocol” by giving those weapons to Israel. “So,” he concluded, “You’ve gotta be real.”

Zarif’s deft use of a colloquial expression drew appreciative laughter from the audience. In one short sentence he demonstrated that his English was completely fluent, that he was familiar with contemporary American culture, and that he had a sense of humor. Throughout the 90-minute event, which was framed as an interview conducted by the Washington Post’s David Ignatius, the foreign minister radiated calm and confidence. And he was charming, except when he chose to turn on a steely, blunt-spoken persona.

The conversation ranged over several issues, starting with the ongoing multilateral — or P5+1 — negotiations regarding Iran’s nuclear program. Zarif said that he and Kerry had agreed on the parameters, and that they were on track for the completion of a road map by June 30. He described it as “good” but “not perfect,” adding that there was “no way to get an agreement that reflects the desires of everyone.” Iran, he emphasized several times, was committed to the negotiations, and everyone involved had invested significant political capital in their success.

The principle of the negotiations is sanctions relief for Iran in exchange for a reduction in its centrifuges and stockpile of nuclear fuel, which would be confirmed by international inspectors.

For Zarif, the opposition he had dealt with among Iran’s leadership was “heat,” and Congressional opposition not his problem. “We don’t want to get bogged down in domestic American procedures,” he said. In a jab that many in the audience seemed to appreciate, Zarif said pointedly that the U.S. would have to sign the agreement “no matter what Senator Cotton says.” Tom Cotton, a freshman Republican senator from Arkansas, recently wrote a letter to the Iranian leadership that was signed by 47 Republican senators, in which he claimed that President Obama could not be regarded as a credible negotiator because Congress would not ratify an agreement with Iran.

Cotton took Zarif’s bait and tweeted out an invitation to rumble. After accusing Zarif of hiding out in the United States to avoid military service during the Iran-Iraq war, he issued his challenge:

To which Zarif replied:

Serious diplomacy, not macho personal smear, is what we need. Congrats on Ur new born. May U and Ur family enjoy him in peace .@SenTomCotton

For the Iranian minister, the purpose of his public conversation with Ignatius was to present the Iranian government’s position on a number of issues — an Islamic Republic Doctrine of sorts, as conveyed by Mohammad Javad Zarif. Iran wants a nuclear agreement, and it wants to be accorded international respect and credibility as a regional power in the Middle East.

The interesting bits were the trolling and the claims that were either “truthy” or not true at all.

Zarif trolled Tom Cotton, and then in turn trolled the government of Saudi Arabia (one of Tehran’s most bitter regional rivals). When Ignatius asked Zarif if he would be willing to accept a Saudi nuclear program and agreement similar to the ones sought by his country, the Iranian diplomat answered unhesitatingly in the affirmative. Would he trust the Saudis to maintain a purely peaceful nuclear program? Yes, insisted Zarif. “It’s their right and rights have to be applied indiscriminately across the board.” A few minutes later, he accused the Saudis of deliberately bombing a landing strip in Yemen so that Iranian planes loaded with relief cargo for civilians had to turn back. The Saudis, he claimed, had been informed in advance and knew what the planes were carrying. A bit later, he said that Iran and Saudi Arabia had a shared interest in fighting non-state actors like Al Qaeda and the Islamic State.

The trolling gave way to claims that seemed rather disingenuous. Zarif said that Iran was committed to nonintervention in regional disputes, referring specifically to Syria. He rejected vehemently the claim that the continuation of the Assad regime was the reason for the Islamic State’s continued appeal. Instead he blamed the Western powers for empowering non-state actors like Al Qaeda and ISIS by insisting on preconditions to negotiations aimed at resolving the ongoing civil war. Let the Syrians decide for themselves, he said. Preconditions, he said, lead to a freeze in negotiations and more bloodshed. Meanwhile, only this week the Christian Science Monitor’s Nicholas Blanford reported that Iran has been propping up the Assad regime with $35 billion in loans per annum, plus soldiers and paramilitaries.

As for the principle of negotiations without preconditions, apparently Zarif did not mean for it to apply to all countries. During the Q&A that followed the interview, Ignatius chose a few of the questions that had been submitted by audience members before the event began. In all cases but one, Ignatius identified the journalist and the media outlet she or he worked for before asking the question. But in one case he skipped that bit of information, which was wise of him, and went straight to the question: “Would you negotiate with Israel without preconditions?”

The answer was a single syllable: “No.”

“Because,” explained Zarif,  “We have a situation where those directly involved have been subjected to an elemental violation of their right to exist as sovereign state.” The Israelis, he said (using the pronoun “they”) should stop looking for “scapegoats” and “smokescreens” and solve their own problem, should stop bombing Gaza every two years. But when asked if Iran would negotiate with an Israeli government that had ended the occupation and resolved its issues with the Palestinians, he said “no” again. My impression was that mention of Israel flustered him a bit and that he had not even listened properly to the follow up question before answering.

After the event, I learned from Yael Even-Or, who covered it for Walla! News, that she had submitted the question. Ignatius, the experienced foreign correspondent, must have known that Zarif would have refused to answer if he’d known it came from an Israeli reporter.

But despite all the hypocrisies and the truth-dodging on certain issues, the most pertinent one is the multilateral nuclear negotiations. That is the one the whole world is watching. It is clear that all the parties want this agreement, and that they have worked incredibly hard to make the negotiations work. It will be very interesting to see what happens on June 30 — or, perhaps, around June 30. As Foreign Minister Zarif put it, quoting the Supreme Leader, “…we should not kill this agreement for a few days more or less. This is a human process, not a divine process.”