A general strike in Ramallah, three days of mourning in the Palestinian Authority and calls for increased protests and non-violent resistance to the occupation. Those were only some of the responses to the death of Palestinian Minister Ziad Abu Ein, who died during a protest marking International Human Rights Day Wednesday.

Abu Ein, who was the Palestinian Authority official responsible for popular resistance against West Bank settlements, took part in a press conference organized by four Palestinian villages and Israeli human rights group Yesh Din Wednesday morning. The press conference was timed to coincide with a petition to the Israeli High Court of Justice demanding that the Israeli army dismantle the illegal settlement outpost of Adei Ad, in the northern West Bank, and International Human Rights Day.

The type of direct action used Wednesday is an example of the way non-violent popular resistance has been organized in the West Bank since the Second Intifada. The struggle, which initially came in response to construction of the separation barrier and the ensuing land grabs, uses tools aimed at bringing resistance against injustice to the locations where they those injustices are taking place. When the resistance is against the separation barrier — they march toward the wall, when it’s about land theft, they attempt to reach those lands and demonstrate there. In the case of today’s action, the activists set out to plant olive trees, a Palestinian symbol, on lands that were confiscated. 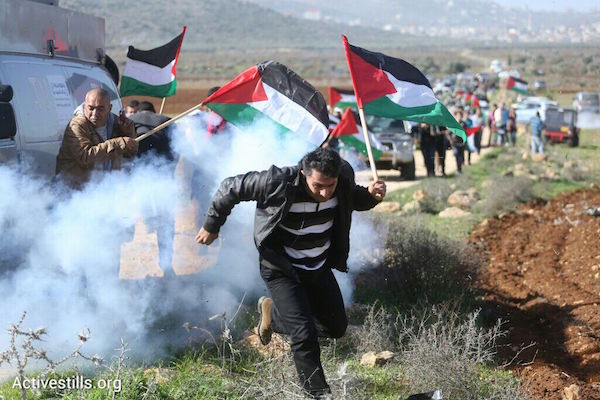 In recent years the Palestinian Authority has assumed a larger and larger role in that struggle. Issa Amro, one of the leaders of Youth Against Settlements, an organization that practices non-violent resistance in Hebron, spoke to +972 about Ziad Abu Eid.

Amro said of today’s events: “The army and the settlers turn the leaders of non-violent struggle into targets. That’s their way of preventing us from recruiting more people and more young people into our struggle. Look at how the army responds to non-violent struggle — with disproportionate violence toward the activists.”

Amro brought up Nariman Tamimi, one of the more prominent activists in the resistance by residents of Nabi Saleh against the confiscation of the village’s spring by settlers, who was shot in her leg last month. “They don’t want this type of struggle because if there is a non-violent movement it will weaken the occupation. They say the occupation is there for security, but if the struggle is non-violent then they can no longer justify the occupation.”

Munther Amira, one of the PSCC’s leaders in the West Bank village of Ni’ilin, told +972: “This is a crime intended to stop these types of non-violent actions. They want us to be violent; they want us to not even open our mouths; they want us to just accept what Israel does. But we won’t remain silent. This is another example of crimes that are committed by the occupation against non-violent activists. But this crime will not stop us from resisting the occupation. We will continue our struggle and even step it up. In the coming days there will be more actions at the same location and across the entire West Bank.” Asked about the mood in the Palestinian street, Amira said: “Everyone is in shock, but not me. I know the way the Israeli army behaves towards us. Every small mistake by a soldier can cost us our lives. They use gas, they shoot at us. He isn’t the first to be killed in a non-violent action. They kill us — we know that we will pay a price, but that is the price of freedom.”

Attorney Gabi Lasky, who represents human rights defenders and activists in the popular struggle, and who is a Tel Aviv City Council member for Meretz, said: “On one hand, in a situation of occupation the security forces defend the settlers and land thieves and implement an apartheid regime in the territories. And on the other hand they prevent the residents of that occupied territory from struggling against that [land] theft and apartheid.”

“Instead of ending the injustice they try and curb and prevent non-violent protests. In doing so, the security forces use violence against anyone who attempts to realize their most legitimate right — to protest. That’s what happened here. And this time, like in previous incidents, it ended with death.”

Yael Marom is Just Vision’s public engagement manager and a co-editor of Local Call, where this article was originally published in Hebrew.