The top two parties are neck-and-neck and the number of political king-makers is growing. With a number of potential wild-cards ahead, it’s anyone’s election.

If elections were to take place today, the next prime minister of Israel could come from either of two directions: the Labor Party’s Issac Herzog or incumbent Prime Minister Benjamin Netanyahu, of Likud.

The latest polls show that both men would have a decent chance of forming a coalition, although Netanyahu would probably have an advantage. 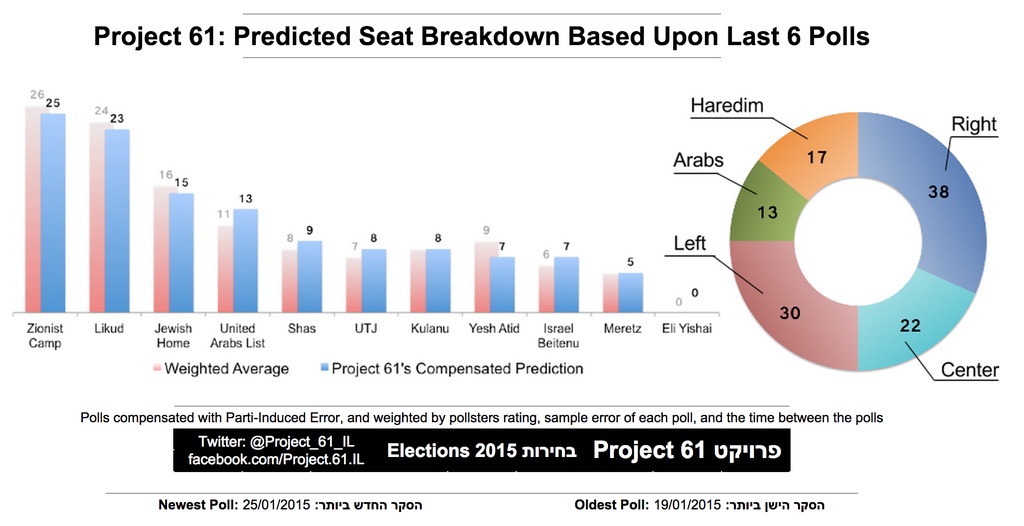 In such a situation, ultra-Orthodox parties United Torah Judaism (UTJ) and the Sephardic Shas party would likely return to their traditional role of political king-makers. However, if the ultra-Orthodox parties must choose between the Right or a left-leaning government that includes Yair Lapid — who after the previous elections refused to sit in any government that included UTJ or Shas — they will probably throw their weight behind Netanyahu.

The centrist parties, Yesh Atid and Kulanu, could also throw their weight behind Netanyahu for the right price — promises to advance their social agendas.

The combined list of Arab parties could also affect who is given a chance to form a coalition by throwing their support behind Labor and Livni, but they cannot be expected to actually join a government headed by a list that calls itself “the Zionist Camp.”

All of that said, it is far too early to begin making election predictions. There are nearly two months remaining before Israelis head to the polls and the number of potential wild cards are growing by the day.

The threat of armed conflict is higher than it has been since the end of the Gaza war this summer, and violence in East Jerusalem is bubbling once again.

Prime Minister Netanyahu’s scheduled visit to the United States and speech at Congress could either boost or hurt him in the polls, depending on how it is perceived in the United States and what blowback it generates in Israel. So far, there has been a chorus of criticism over Netanyahu’s visit and its amplifying effect on his continuing bad blood with the White House.

Few parties have laid out any platforms that set them apart from the other parties (which Mairav Zonszein discusses in more detail here) and the debate thus far has been dominated with mud-slinging contests centering on the Zionist credentials of a nearly indistinguishable pack of centrist parties and politicians.

So while the “Zionist Camp” has progressive and significant growth in the polls, it is far from the finish line. And even if it the center-left comes out with more seats than Netanyahu, there is no guarantee it will be able to form a government.

Related:
Why Mizrahim don’t vote for the Left
The ‘anti-Zionist’ camp goes mainstream in Israeli elections
WATCH: Shas’ election ad is a challenge to both Right, Left