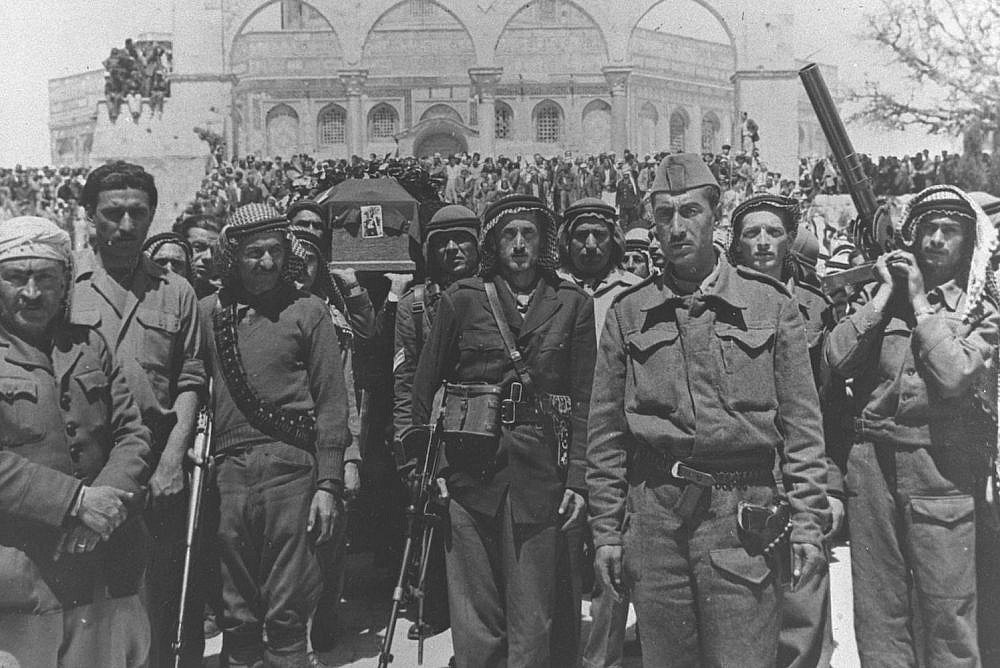 Hundreds of members of the Arab Liberation Army attend the funeral of Abd al-Qadir al-Husayni at the Dome of the Rock, Jerusalem, April 8, 1948. (GPO)

On April 4, 1948, just weeks before the establishment of the State of Israel, an Iraqi soldier named Abdullah Dawud took part in an unsuccessful attack on a kibbutz in northern Palestine. One of the key battles of this time, the attack lasted for nearly two weeks, involved heavy artillery, and ended in a total of 115 casualties. Dawud, a sniper, was one of thousands of volunteers from across the Arab world who made up the Arab Liberation Army (ALA), which had carried out the assault.

In 1990, Israeli journalist Sarah Leibovitz-Dar interviewed Dawud about his service in the ALA; five decades later, the former soldier was still proud of his ability as a sniper. “I was such a great soldier,” he boasted, “that my officer, Husayn, who was a real bastard, told me: Abduallah, too bad you are Jewish.” The interview took place in Tel Aviv: Dawud, who was indeed Jewish, had immigrated to Israel in 1950, just two years after fighting against the nascent Israeli army.

Dawud’s story opens “Dear Palestine: A Social History of the 1948 War” (Stanford University Press, 2021), a new book by Shay Hazkani, an assistant professor of history and Jewish Studies at the University of Maryland, which uncovers a trove of letters written by soldiers from both the Israeli army, the ALA, and Palestinian civilians during the war, which were previously classified and stored in the Israel Defense Forces and Defense Establishment Archives. These letters were secretly intercepted and copied by the Israeli censorship bureau in order to gauge public opinion, and thus inadvertently preserved for future historians. The book also draws on propaganda pamphlets from the time, both those produced and captured by Israel.

If Dawud’s Jewishness seems surprising, it is likely because of what the sociologist Ulrich Beck called “methodological nationalism”: the common, implicit assumption that we can deduce the motivations of individuals from the nationalities/ethnicities they belong to. For many contemporary Jews, this translates into expectations that Arab volunteers and soldiers were largely motivated by antisemitism , and that Jews justified the actions of the Israeli government and army at the time, fighting what was seen as a war for survival. Specifically, readers are likely to project contemporary images of the supposedly inherent attraction by Mizrahim (Jews with origins in Arab or Muslim countries) to Israel’s ultra-nationalist right onto the Mizrahi soldiers of 1948. 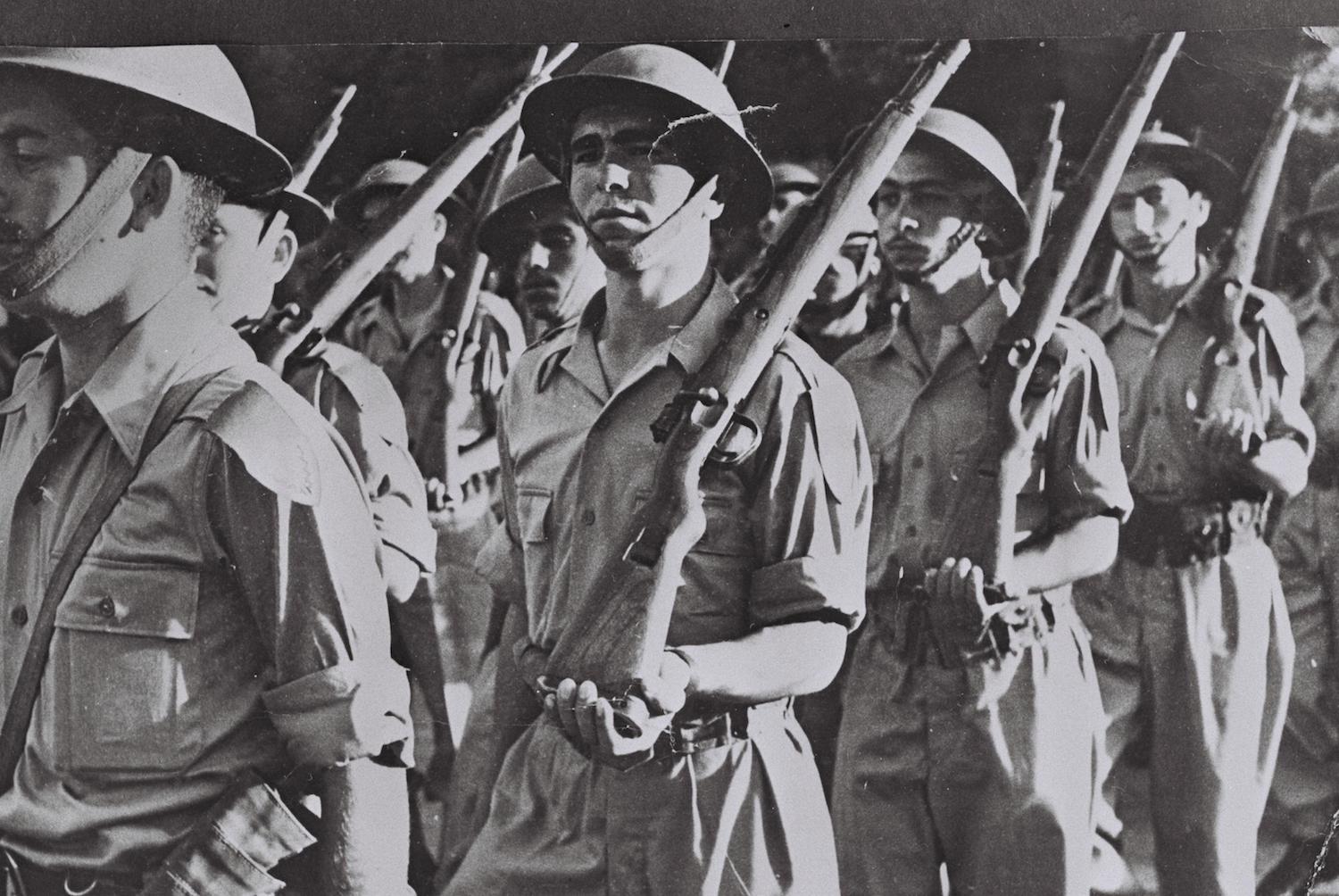 Hazkani’s book complicates all of these assumptions, offering three key challenges to this methodological nationalism as it relates to Israeli-Palestinian history. The first of these is in the realm of contemporary propaganda: Hazkani notes that the ALA’s output “was more measured, less violent, and placed a greater emphasis on universal values and international law” than that of the IDF, whose pamphlets compared the Arab enemy to Amalek, the biblical nation whom the Israelites were commanded to exterminate. David Ben Gurion, Israel’s first prime minister, employed this analogy, marking a break from centuries of Jewish commentators who were careful not to compare Amalek to any contemporary group. By contrast, the ALA promised that in the future Arab state in Palestine “Jews will live as ordinary citizens and will enjoy full rights of citizenship.”

An ALA operational order defined the organization’s strategic goal as “preventing the partition of Palestine by performing military tasks with the aim of: 1. Convincing the Jews that their hostility to Arabs will result in a disaster for them; 2. Preventing Jewish attacks against Arabs, and causing casualties [among Jews].” The ALA’s propaganda made no mention of annihilating Jews or “pushing them into the sea,” as Israeli propaganda claimed at the time. Of course, this conclusion does not definitively prove that Arab armies refrained from using extreme rhetoric or harboring more extreme goals, but it does undermine the accusations of widespread and even rote antisemitism, making it clear that we cannot generalize from the pronouncements of a single leader such as Haj Amin al-Husseini, the Grand Mufti of Jerusalem. Equally, the IDF’s genocidal anti-Arab rhetoric cannot be dismissed. 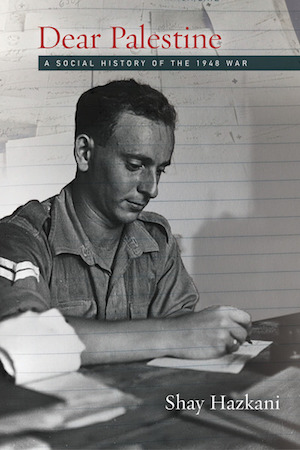 Another counter-intuitive finding is the extent of IDF volunteers’ criticism towards Israeli society at the time. Fifty-five percent of Mahal, the army’s foreign volunteer unit (from Western countries), had negative views of Israel and its citizens, according to a March 1949 poll by the IDF Center for Research of Public Opinion.

Much of this criticism was aimed at perceived corruption and disrespectful behavior, but Martin, an American Jew, wrote to his family that “the Jews of Israel traded their religion for a revolver, in every respect.” Meanwhile, Richard, a South African soldier, refused “to fight for the territorial and imperialist ambitions of the Zionist effendis [Turkish word for notables, used ironically here], even if they call themselves socialists. The Zionist leadership is instigating war in order to expand the borders of Israel. They create the war-like atmosphere on purpose.”

On the other hand, there were those such as Tikva Honig-Parnass, a female soldier in the Palmach who complained to her parents about two “soft-hearted” Mahal American volunteers she encountered. Years later, Honig-Parnass would come to acknowledge her role in the 1948 war and speak out about the Nakba.

These criticisms were likely not shared by the majority of soldiers, yet they were not insignificant. Even in relation to the army’s involvement in the expulsion of Palestinians, opinions were not as uniform as might be imagined in retrospect. In April 1948, the army’s education department published a pamphlet entitled “Answers to Questions Soldiers Frequently Ask,” which opened with the question, “Why don’t we agree to the return of Arab refugees during the lull [in fighting]?” The prominence of the question demonstrates, in Hazkani’s interpretation, how common it was among the soldiers themselves.

Even after the war, in 1949, over a quarter of Tel Aviv residents supported the return of Palestinian refugees, according to a poll by the IDF Center for Research of Public Opinion. Today, return is considered almost a taboo subject, never discussed in the media or among Jewish political parties. It is therefore interesting to note that contemporary opinion, despite the high price Israeli society had paid in a war that had only just ended, regarded the question of Palestinian return as a legitimate one, with support from a substantial minority.

The book’s final challenge to methodological nationalism relates to Jewish soldiers from Arab countries. Hazkani did not manage to trace the stories of other Jews such as Dawud who fought against the IDF. But even among those who volunteered and fought in the Israeli army there was a remarkable level of criticism. The wartime conditions did not lead to unity and solidarity, but rather to heightened sensitivity vis-a-vis anti-Mizrahi racism. This would perhaps surprise those who today see Mizrahim in Israel as emblems of hyper-nationalism.

Naim, a North African soldier, wrote to his family that “the European Jews who suffered tremendously from the Hitleristic Nazism see themselves as a superior race and the Sephardi as belonging to an inferior one. The poor African who came here from afar and was not required to leave his home because of racial discrimination is now humiliated at every turn.” Maimun, another North African soldier, explained to his family that “it is better to eat dry bread in Morocco than chickens here. You must know that the Arabs are our brothers, unlike the Ashkenazi Jews who make our lives miserable. For all the money in the world I will not stay here.” Then-IDF Chief of Staff Yigael Yadin read to his officers excerpts from intercepted letters sent by soldiers who had recently immigrated from Iraq. Yadin expressed concern that most did not show the level of animosity to Arabs that he had expected. 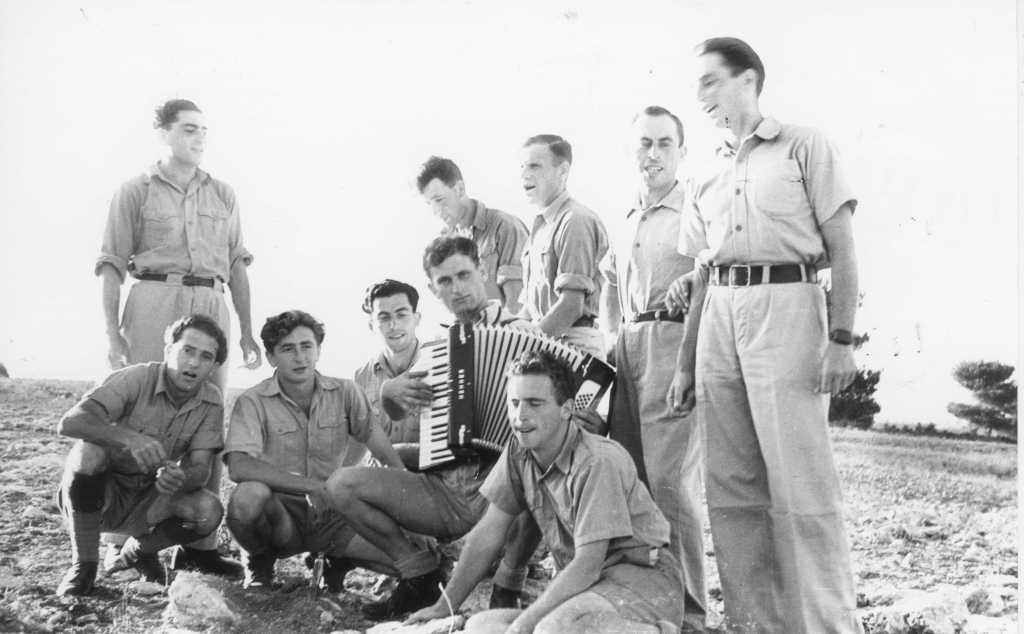 Soldiers in the Palmach, the elite fighting force of the Haganah, play music during military training, in the northern town of Beit Oren, circa 1941. (The Palmach Archive)

According civilian censorship bureau, which read the mail of North Africans in Israel that was not sent through the army post, 60 percent of North Africans were actively trying to return to their countries of birth, while 90 percent telling their families not to follow them to Israel during those years. But their passports were confiscated by Israel, presumably because they were still useful to the government — providing cheap labor and being sent to populate areas recently cleansed of their Palestinian residents.

The book covers many more sets of documents, including heartbreaking letters from newly-displaced Palestinian refugees hoping for a quick return to their homes. I have, however, chosen to focus on these three challenges to our assumptions about both sides’ motivations during 1948, because our view of the past is often used to legitimate the present and prevent a different future. Those advocating for the return of Palestinian refugees are often told that the Israelis of 1948 had no choice, had their backs to the wall, or were faced with genocide. Alternatively, we are told that the nationalism of present-day Israelis is inevitable, with Mizrahim often turned into symbols of extremism, supposedly because of the hatred they had acquired over many generations of living in Arab countries.

Hazkani’s book does not completely overturn our view of the past, but it does add nuance, proving that it was possible, even in the early years of the state, for Israelis to view their Arab and Palestinian neighbors less hatefully than the Israeli leadership at the time had wanted. This enmity and nationalism were produced with much effort, as a result of systematic indoctrination. And if such animus was not always present in the past, it may not have to remain a part of our future.