The surreal arrest and trial of a Palestinian poet symbolizes a crackdown on free speech, surveillance on social media, and rising authoritarian trends in Israel. +972’s Story of the Year for 2017. 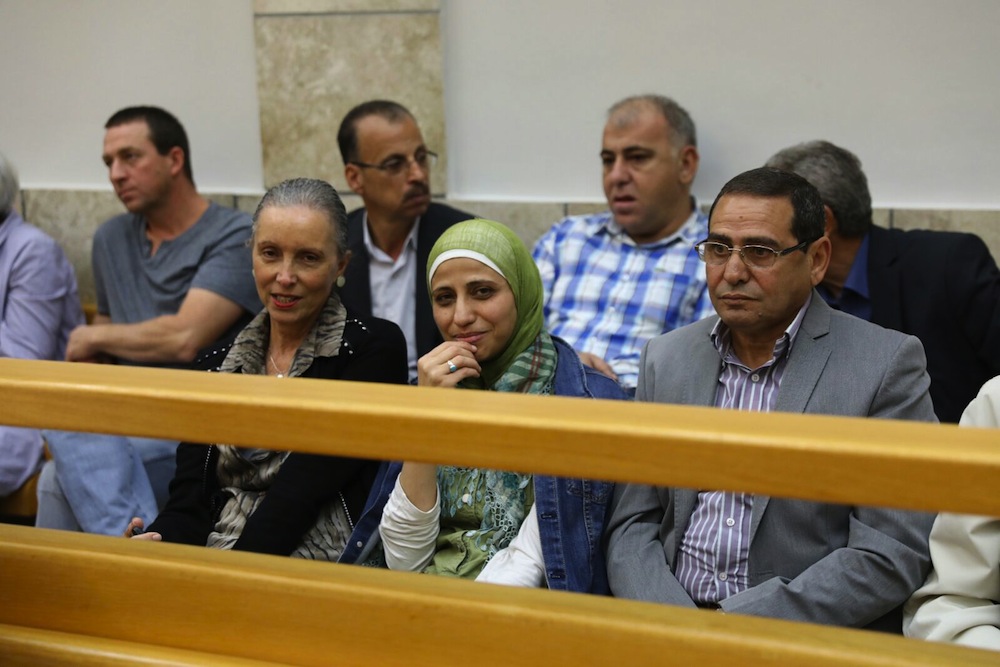 For the past year and half, a strange and disturbing drama has been playing out in a Haifa courtroom. In the defendant’s seat is a poet, on trial for a political poem she wrote, performed, and published on Facebook. Whether she goes to prison for publishing that poem rests largely on how the judge ultimately interprets a few words translated by a policeman whose main qualification is that he studied Arabic literature in high school.

Dareen Tatour, 35, is a Palestinian citizen of Israel from the town of Reineh, just outside of Nazareth. Her poem, “Qawem Ya Sha’abi, Qawemhum” (“Resist my people, resist them”), was published in 2015, at the height of Palestinian protests across Israel and the West Bank and a wave of so-called lone wolf stabbing and vehicular attacks against Israeli security forces and civilians, largely in Jerusalem and Hebron. A few days later, police stormed her house and arrested her in the middle of the night. She spent three months in prison and has been under house arrest ever since, pending the conclusion of her trial.

She was charged with incitement to violence and expressing support for a terrorist organization.

The issue at question, and what will ultimately determine whether she returns to prison or is exonerated, is the policeman’s translation and interpretation of her poetry. The defense has called a cast of experts on Hebrew and Arabic literature to testify about the various meanings of specific words and phrases, the nature of political poetry, and how even some of the most oppressive regimes in the world have tolerated dissident poets.

Tatour’s story is not only her own, however. Her arrest and political trial represent a terrifying new era in which Palestinians, and some Jewish-Israelis, are arrested and imprisoned by Israeli authorities, sometimes without trial, for things they write on Facebook. The poet has become an unwitting symbol of the rise of state surveillance of social media.

Over the past two years, Israel has arrested hundreds of Palestinians on both sides of the Green Line (and a very small number of Jewish Israelis) for political speech published online – mainly on Facebook. The Israeli security establishment hires local high-tech companies who, alongside state intelligence agencies, monitor every word published in social media, and uses algorithms to identify posts they think might indicate the author will commit a crime in the future. Based on that data, the army and police make arrests — much like in the 2002 Sci-Fi film “Minority Report” — even in cases when the suspects themselves might still be unaware of their own violent intentions.

Nearly every Palestinian arrested these days in any context of political dissent or protest is asked by his or her interrogators to show them their social media accounts. The contents therein often become the ready-made substance of criminal charges, the severity of which is often calculated based on the numbers of followers, likes, and shares of whatever damning post is found.

In some cases, the absurdity and danger of criminalizing speech has reached levels that would make even weathered satirists blush. There was the Palestinian heavy machinery operator who posted “Good morning!” on Facebook, wrongly translated by Israeli police as “harm them” — which promptly led to his arrest. Or the case of Anas Abudaabes, who wrote a sarcastic post about Arabs celebrating wildfires in Israel, for which he spent three days in jail — until police figured out the joke. Or Jewish-Israeli political activist and lawyer Barak Cohen, who was recently found guilty of “insulting a public servant” for a song he performed and published on Facebook mocking a police officer; the prosecution is now seeking a prison sentence of one year for Cohen.

Those are only a select few examples of the cases we know of.

We also know that last year the Israeli Military Censor, which is charged with imposing prior restraint on the news media in Israel, announced that it would start monitoring the Facebook pages of smaller media outlets such as +972 Magazine, which once flew under its radar. We also know that state officials are working with Twitter and Facebook to remove and censor posts and even entire profiles from their social networks. The number of gag orders issued by Israeli courts — preventing the publication and dissemination of information on traditional and social media, including materials published in countries like the United States, where Israeli speech restrictions do not apply — has tripled in 15 years, and keeps on rising.

While the practice of criminalizing and censoring political speech is not necessarily a new phenomenon, the capabilities that social media platforms and internet surveillance give states like Israel add a terrifying element. The technologies that we think of as democratizing — because they allow anyone to voice their views to millions — have also become effective tools for secretive state organs to oppress dissidents and dissent in ways the East German Stasi could only have dreamed of.

Beyond the technological aspect, however, Tatour’s arrest and trial is also symbolic of a broader campaign against Israel’s 20-percent minority of Palestinian Arab citizens, which is itself a result of rising Jewish-Israeli nationalism and the ensuing authoritarian trends. Two elements of that campaign, cultural and political, target the very idea of Palestinian national identity and its expression.

The first element, the assault on culture inside Israel, has been spearheaded by Minister of Culture Miri Regev. Regev has made it a personal mission to revoke public funding from filmmakers, theaters, dance groups and others who she deems “disloyal” to the state. Disloyalty, in her and other politicians’ eyes, includes opposition to the occupation, refusal to perform in settlements in the West Bank, and just about any expression of Palestinian national identity.

In recent years this policy has led to a rewriting of the criteria for government support of the arts; the removal of books portraying Jewish-Arab romance from school curriculums; the cancelation of subversive or occupation-themed plays in theater festivals; and the cancelation of government funding to the Al-Midan Theater in Haifa and the Arab-Hebrew Theater in Jaffa – the latter after it hosted an event in solidarity with Tatour.

The second element of the government’s campaign against its Palestinian citizens is more explicitly political. Benjamin Netanyahu’s inflammatory warning on the eve of the 2015 general elections, that “Arab voters are heading to the polls in droves,” was just the beginning in what seems like a no-holds barred escalation in efforts not only to delegitimize but actually undermine any Palestinian, or even Arab national identity in Israel.

Those efforts have resulted in outlawing one of the largest political organizations in Israel, the Northern Branch of the Islamic Movement. They have led to laws that bar the entry into Israel of foreigners who express their opposition to Israeli policy with settlement boycotts or support for the nonviolent, Palestinian-led BDS movement. It has led to the suspension of Arab members of Knesset and a law that allows for their expulsion. An Israeli court this year stripped an Arab man of his citizenship, justifying the move by saying certain Israeli citizens of Palestinian heritage are predisposed to violence. A new law, which would have the equivalent force of a constitutional amendment, would give preference to Israel’s “Jewish” character over its “democratic” character, ensuring that Israel never becomes a state of all its citizens.

All that — along with decades of policies meant to ensure there is only space for one national identity in a state that, whether its leaders want to believe it or not, is bi-national — set the stage for the arrest and trial of Dareen Tatour. Her story is a sign, symbol and symptom of the authoritarian tendencies rising in Israel and around the world. Her story is the story of potentially liberating and empowering technology being subverted by state authorities in order to oppress and suppress. Hers, unfortunately, is the story of 2017.