Often times pessimism is caused by choosing to remain a spectator, and pretending to remain powerless instead of taking responsibility and deciding to act according to what one believes. But what does this mean, and how do you do it? 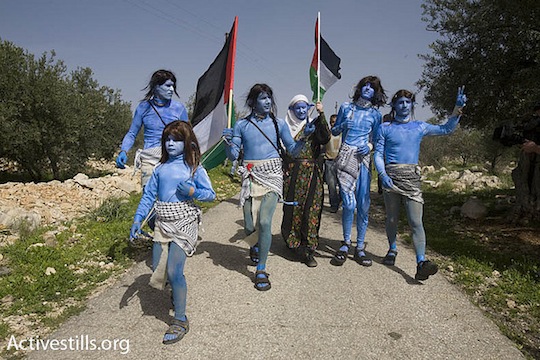 Anti-occupation activists dress up as characters from the film Avatar during a demonstration against the separation wall in Bil’in. (photo: Oren Ziv/Activestills)

In a recent +972 post, Noam Sheizaf wrote that “there is something extremely grotesque – for lack of a better word – in hearing Israelis (or Zionists) explaining that the effort to end the occupation is simply not working, or beginning to seem pointless. Israelis are in power. They can end the occupation with a simple decision. Palestinians can’t.” Another way of putting this is that expressions of pessimism by the privileged side amount to a justification of those privileges – an irresponsible and immoral position. A man who tells a woman he is pessimistic about her chances of being paid equally, while doing nothing to further this cause, would rightly be perceived as a sexist: he is accepting her inequality.

It’s worth thinking about the alternative: regarding optimism as a moral duty for the powerful side. I came to realize this gradually, especially after the dark days of the Second Intifada, with its daily news of slaughter on both sides. I had dealt with this by isolating myself, making my world small, sticking to everyday routines. Watching TV shows may have felt safer, but it did not make me any happier. In retrospect, I realize that my pessimism was caused by choosing to remain a spectator, to pretend I really was powerless, instead of taking responsibility and deciding to act. But what does this mean, and how do you do it?

As a middle-class, well-educated, light-skinned, straight, Jewish-Israeli man, I am privileged: there are no government plans to demolish my home; mine is not a dangerous working environment where I am likely to get injured at any moment; I will not be deported to a foreign country because of my “foreign” skin color, or beaten for my sexuality; I can walk around freely late at night in most parts of my city; I know both Hebrew and English well and can use them to inform people and shape their opinions. All these are resources, and I can commit myself to constantly use these resources to challenge the policies and practices that prevent others from receiving the same privileges that I have. I can choose to stick to that commitment even when I am tempted to feel pessimistic or victimized – because I am truly not the victim here. This means I can commit myself to being optimistic, as I continuously work for change.

Optimism can be superficial, escapist. It can be fake. But committed, serious optimism is a skill you can teach yourself. Here are some tips:

Rely less on the mainstream media, more on credible alternative news sources. The media focuses very heavily on decision makers and their pronouncements, which can be very disempowering. It makes us forget that policymakers are often bound by special interests, while grassroots activists often have the ability to circumvent these interests, if they are creative enough. For example, President Obama declared in 2009 “The United States does not accept the legitimacy of continued Israeli settlements… it is time for these settlements to stop,” but settlement construction continues with the tacit agreement of the U.S. At the same time, grassroots activists from around the world are succeeding in building economic pressure on companies profiting from the occupation. A campaign against G4S, which supplies equipment for settlements and checkpoints, made the University of Oslo terminate its contract with the company last week. G4S promised to pull out of settlements by 2015 , but activists are demanding that it do so immediately. Sodastream, a company based in a settlement, has warned its investors that “A number of political groups have called for consumer boycotts of Israeli products originating in the West Bank, including our products… For these reasons, we may in the future be required to transfer a significant portion of our manufacturing activities to a location outside of the West Bank.” This is much more than anything Obama achieved.

The news was hardly reported in the mainstream media. I heard of it through immersing myself in an alternative community. Through solidarity work, I now have numerous friends who are Palestinian activists, and they educate me about their struggles, including achievements such as this one. This is not the usual case for Israeli Jews: we live in an unusually segregated society where we have a special Hebrew term for “mixed cities”, instead of seeing ethnically pure cities as the exception. While more than half the inhabitants of the area under Israel’s control are Palestinians, it is common for Jews to limit their daily contact with them to frightening TV images of terrorists, or to superficial service relations with low-paid workers. But one can choose to learn Arabic, to live in a “mixed” neighborhood, to make Palestinian acquaintances and to get involved in their struggles.  And the same goes for any other disadvantaged community – you can choose to use your resources to support them. Remember that you always have more potential allies than your prejudices lead you to believe. Being part of such an alternative community can counteract the pessimism of being channeled into predictable, segregated lives.

Keeping your activism sustainable. On the one hand, you want to push yourself out of your comfort zone, one step at a time: challenging yourself to do something out of the ordinary, something you never dared to do until now, reaching out to someone you never dared talk to, saying something in public even if you know you’ll get attacked, just for the incomparable pleasure of being true to your conscience. Outrage can be especially useful in this regard – think of this the next time you get really furious at the news: what new commitment can you make, in order to use this anger productively – instead of just going back to business as usual?

On the other hand, don’t burn yourself out. Instead of turning yourself into a bitter, unpleasant martyr, integrate your efforts into your life without letting them take over. +972’s Haggai Matar is famous for his Facebook posts, typically combining a report on the latest campaign he’s involved in with mouth-watering examples of his vegan cooking. Activists do get to breathe and rest and enjoy themselves.

Finally, remember not to exaggerate the strength of the powers that be. Any oppressive social system invests a lot of resources into intimidating challengers, by pretending to be more uniform, and less vulnerable than it really is. Mubarak was toppled through massive workers’ strikes and unexpected uses of Facebook. Logically, there must always be loopholes, contradictions, vulnerabilities, especially in a non-totalitarian society like ours. Not falling into pessimism means consciously looking for these cracks in the system, and actively seeking to learn from the experiences of others. Instead of being bullied into passivity and silence, you can maintain your creativity. Because optimism really is a matter of choice.