International organizations warn of a humanitarian disaster and pending war in South Sudan. Israel, however, has seized the new state’s independence as an opportunity to deport South Sudanese nationals, who formerly enjoyed the temporary protection Israel extends to Sudanese citizens. Authorities on Sunday began arresting South Sudanese asylum seekers in Israel ahead of their deportation. This is one asylum seeker’s plea for just treatment. 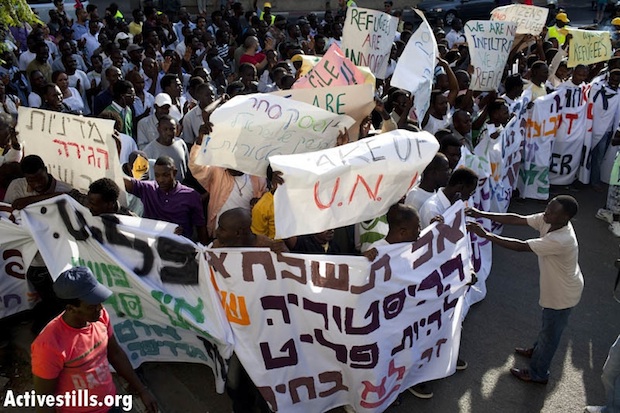 This is a genuine, heartfelt letter to the great Israeli society, and an expression of the pain in my soul to Israeli authorities, due to their unethical attitude toward African communities in Israel.

We, the South Sudanese community in Israel, understood the decision by the Jerusalem District Court to allow our deportation. But we call upon the Court to base our return on legal procedures on repatriating refugees.

We came to Israel with our UNHCR documents. We are not regular illegal migrants who are sometimes deported by the migration police. But Israeli policy regarding the Sudanese has sabotaged our rights. We are here in Israel as refugees seeking protection, and we are appealing to the Court for legal status.

There is nothing worse than being unwanted in the home of your friend. After a life of tragedy and trauma, we now see hatred strike the human soul, as we live among our blessed brothers and sisters of Israel. Something deep within our core was shattered when we heard Interior Minister Eli Yishai make statements such as, “Muslims who arrived here do not even believe that this country belongs to us, to the white man.” Mr. Minister, we are not Muslims and we are not conquerors of Israeli land. We have our own blessed land in South Sudan, but due to the brutal Islamic regime in Sudan, we fled death to reach your country. Death is our first and our last enemy.

It has been so difficult for us to feel any sustained wind of love and respect. We ask ourselves: Will the time come when the pain we have experienced so intensely in Israel ever heal? I refer to pain in our souls, not physical pain. We came to Israel looking to heal our souls, seeking protection. We South Sudanese felt amazed from the moment we entered Israeli society.

But then the authorities made us feel such discomfort. According to Prime Minister Benjamin Netanyahu, “the breach of Israeli borders by infiltrators could threaten the Jewish and democratic state,” and in order to remove the “infiltrators” from Israel, he will begin by removing the South Sudanese. This statement shocked us; we felt the heat of hatred and racism that has occupied the air in Israel.

We were not equipped to understand how our early experiences of friendship fit with the hatred expressed by MK Miri Regev of Likud who called the Sudanese “cancer” in Israel’s body. Interior Minister Eli Yishai indicated that we have diseases such as Hepatitis B, measles, and AIDS. According to Minister Yishai, it turns out that Africans are the main source of “various phenomena such as the rape epidemic, violence and theft, although not all Africans are in that business.” Danny Danon of Likud attacked African people on his Facebook wall, writing that “Israel is at war with an enemy state of infiltrators established in Israel, and its capital is south Tel Aviv.” Michael Ben-Ari of National Union accused our kids of carrying unknown diseases and MK Aryeh Eldad called for the “shooting of whoever touches Israeli borders.”

But being a black man or woman doesn’t turn an African into a disease carrier.

With these descriptions, one begins to feel as though he or she has a tail or fur, rather than feeling like a being human among other human beings. As a result, the South Sudanese in Israel have lost the trust and respect of Jewish society, who now view us in general as wrongdoers.

I call on my African people who are going to remain in Israel to distance themselves from such evil things. Please, live in harmony with neighbors and friends. I will support the interior minister and other protective authorities in applying legal means to anyone who thinks of committing unlawful acts. Rape can scar a person for life, with emotional, mental, and physical scars. It damages psychological health and can cause a person to shut themselves down from people due to fear.

But we too have experienced fear, from their racist language and their fear of the demographic problem.

Despite all this, I would like to give special thanks to the head of Defense Ministry, Ehud Barak, as well as any other protective authorities, and each and everyone in uniform for their honesty at the borders. The values of Israel and Jews are with those people I met at the border and in prison when I entered Israel in 2006. I would also like to express appreciation for the Minister of Foreign Affairs, Avigdor Lieberman, for his leadership based on the rule of law; he has said that that “no person has the right to violate the law and resort to violence against others, certainly not to endanger lives.”

Joseph Monyde Malieny is a native of South Sudan and a Postgraduate in Government, Administration and Development Studies at the University of South Africa (correspondence). He has been in Israel since 2006 and is seeking asylum. He can be reached by email here.