A Palestinian American professor’s withering tweets against Israel’s offensive in Gaza cost him his job. If his freedom of speech isn’t protected, it could be me or you next.

In 2013, the American-Indian Studies Program at The University of Illinois decided to hire Steven Salaita, who then held a tenured position at Virginia Tech University. The university’s administration approved the appointment via a standard procedure that seemed to go smoothly. So in 2014, Salaita resigned from Virginia Tech, sold his house and moved with his family to Urbana-Champagne. But then, something very unlikely happened.

On August 1, Salaita received an email from Phyllis Wise, the U of I chancellor, informing him that his job offer had been rescinded. Wise wrote that the position was subject to approval by the university’s Board of Trustees, but in his case, the appointment would not even be submitted to the Board.  “We believe that an affirmative Board vote approving your appointment is unlikely,” Wise wrote. “We therefore will not be in a position to appoint you to the faculty.”

This was a very unusual decision, because Board approval is typically no more than a formality. However, that changed when Salaita, an American citizen of Palestinian decent, expressed his rage against Israel in a series of tweets about the war in Gaza in July, which he posted on his Twitter account. (The New York Times published a report with a selection of those tweets so you get an idea). Until the summer of 2014, nobody at U of I questioned Salaita’s scholarship on Native American and Palestinian issues (his scholarship and publications are strongly tied to his political activism).

However, after an exposé on Salaita in The Daily Caller, an extreme right-wing electronic newspaper, as well as a charge of anti-Semitism from The Simon Wiesenthal Center  Campus Outreach program, there was major concern about his tweets and political positions. There seems also to be a trove of documents showing that the university administration turned against Salaita due to pressure from rich donors, whose interest is apparently well represented by the Board. “Having been a multiple six figure donor to Illinois over the years, I know our support is ending as we vehemently disagree with the approach this individual espouses,” wrote one U of I business school graduate, for example.

Wise’s decision attracted much attention and condemnation both from within the University of Illinois, and from large academic organizations such as the American Association of University Professors, the Modern Language Association and the American Historical Association. Several prominent professors of Jewish and Israel studies wrote in a statement that they found the actions against Salaita “deplorable.” On September 9, Prof. Salaita, who later wrote in an op-ed that the university had “destroyed” his career, released a statement declaring that he did not intend to give up. He added,

[m]y Twitter messages are no doubt passionate and unfiltered; they reflect my deep dismay at the deaths of more than 2,000 innocent Palestinians, over 500 of them children…My comments were not made in a classroom or on campus; they were made through my personal Twitter account. The University’s policing and judgment of those messages places any faculty member at risk of termination if University administrators deem the tone or content of his or her speech “uncivil” without regard to the forum or medium in which the speech is made.

On September 13, the Board of Trustees of the University took a vote, but Salaita’s case lost 8-1. Most of the trustees agreed with Wise’s “philosophy of academic freedom and free speech tempered in respect for human rights,” and her decision to withdraw Salaita’s offer two weeks before classes started. 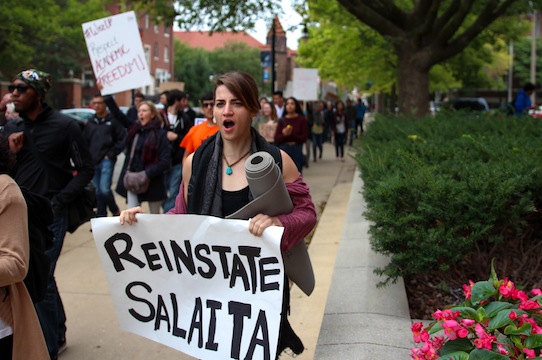 In the weeks since the Salaita affair became public, there has been much debate regarding the nature of the controversy. Some argue that this is about Israel and Palestine. Others that it is about when the fine line between outrage at Israel’s actions blurs into anti-Semitism. Or that this is an issue about the difference between “personal” assertions on social media, vs. “public” statements and published scholarship. Then there is the issue of academic freedom and freedom of speech. Or is this really about money, donors and the consequences of having a public university run according to a corporate-capitalist model? All these issues play a part in the Salaita affair. But, as Professor Michael Rothberg argues, by dividing themselves into camps, those who oppose the university’s decision to rescind its offer to Salaita are missing a crucial opportunity to mobilize for positive action. And it does not look as though this case will be resolved any time soon.

The next, perhaps unavoidable, step in this saga seems to be the American court system, which will have to deal with some of these questions on a legal basis. Salaita has stated that he is ready to sue the University and fight his case. But it has emerged that the Board of Trustees already took this possibility into account, and even considered the consequences of losing the case. Cary Nelson, a professor of English, who was consistent in his support of the Chancellor’s decision, said that a settlement of $1 million “would not be unreasonable.” Christopher Kennedy, the chairman of the board, seems to agree. He said “there’s a lot of case law about what you should do when this sort of thing occurs. So we’ll try to be consistent with best practices in the university environment and the corporate world as well.”

Kennedy’s statement demonstrates the extent to which American universities have become a mirror of corporate America, rather than independent institutions of learning. But this is not just about the big money that cash-starved public universities desperately need. This should be a red flag for anyone who cares about academic freedom, and the autonomy of academic governance. Whatever people might think of Salaita as a scholar, or about his tweets against Israel, the way his case was handled by the University of Illinois is a major failure of university administration and academic governance. But it is also a violation of the principle of academic freedom that stands at the heart of the American university system, and of academic and civil freedom everywhere, which insists that “when they speak or write as citizens, [professors] should be free from institutional censorship or discipline.”

The Salaita case is not an isolated one. Rather, it is the latest in a series of recent attempts to silence dissent in the academic world and in the public arena. This has been going on in the U.S., in Israel and around the world. Recent examples include an attempt by a right-wing organization with the dubious name AMCHA (In Hebrew AMCHA means “your nation,” which the U.S organization has translated as “the masses” in the “grassroots” sense of the term, but in colloquial Israeli Hebrew the term is used to refer to “the mob,” or common, uneducated people), which published a blacklist of Middle Eastern scholars who called for the boycott of Israel. This attempt to silence is, once again, done in the name of combating anti-Semitism and “protecting” Jewish students on campus.

Part of the complexity of the Salaita case is the permeable line between legitimate criticism of the policies and actions of the Israeli government and army – even if done with inappropriate “uncivil” language – and anti-Semitism. This line should be clearly drawn. There is plenty of real, virulent anti-Semitism in the world today, including in the US. Confusing harsh words by Salaita or others with real anti-Semitism is dangerous.

Another example is happening in Israel: Tel Hai College threatened to fire Gabby Weinrot, a teaching assistant who, like Salaita, made comments against the war in Gaza on Facebook. The college admitted to monitoring its faculty’s activity on social media, and indeed invited Weinrot for an investigation. In this case the college decided to censure him rather than fire him, perhaps because it was difficult to make the claim that an Israeli Jew is an anti Semite. Besides, Tel Hai College doesn’t have donors with deep pockets to cover the cost of litigation. There was also the 2012 attempt to shut down the “leftist” Department of Politics at Ben Gurion University.

Everyone who is alarmed by these cases and by the Salaita affair must fight this dangerous trend. Today it was Steven Salaita, but if you are voicing criticism of Israel’s actions (even as a Jewish critic in Israel), tomorrow it could be you or me.

Shachar Pinsker is an Associate Professor of Judaic Studies and Near Eastern Studies at the University of Michigan. He publishes widely on Hebrew, Jewish and Israeli literature and culture on his personal academic website.

Related:
Silencing dissent in Israel – continued
Israel’s Left forgot what dissent really means
Dissent in Israel: On the margins, yes, in the mainstream, no