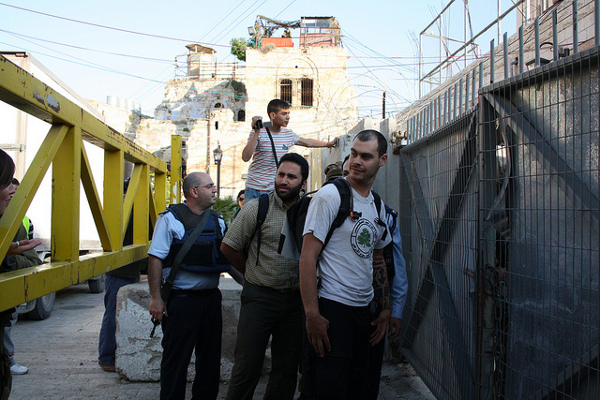 Nonviolent organizer Issa Amro was released from military prison this morning in a rare case of swift justice for Palestinians in the Israeli legal system.  Amro, the director of the Hebron based NGO Youth Against Settlements, was one of the organizers of Friday’s international day of action to open Shuhada street. On Monday, Israeli authorities summoned Amro for an interrogation in the Kiryat Arba police station. Authorities threaten to raid Amro house if he failed to appear for questions.

Once he entered the station, Amro was arrested on suspicion of ‘sedition’ and ‘membership in an illegal organization,’ both are serious charges which are routinely used against Palestinians engaged in nonviolent resistance to Israel’s military occupation of the West Bank. After questioning, Amro was transferred to the Kafar Asiyun Military Detention Center where he remained until this morning. Arrests are not something new for Amro as he is routinely arrested for his nonviolent work in Hebron. Often, Israeli authorities are unable to produce evidence and simply use their privilege to harass Amro.

This morning, a hearing was set for Amro in the Ofer military prison. Before the judge even arrived, the state dropped its charges against Amro. Today, Amro will be able to continue his nonviolent work with Israeli and international partners. However, the occupation also catches up and eventually he will face a long prison sentence such as the one given to Bil’in’s Abdallah Abu Rahmah for his bold nonviolent work.

Also in Ofer today, journalist and activist Mahmoud Al-Jabari, 20, was released from the military prison after the state dropped stone throwing charges against him. Al-Jabari was arrested during last Friday’s Hebron demonstration with an Israeli activist. The Israeli was released after three hours but Al-Jabari was detained and charged with stone throwing. Today, the military court deiced to drop charges against him for lack of evidence. His mother attended the trial and even brought a photo of her son with Israeli President Shimon Peres taken last year. It might have swayed the judges’ opinion enough to grant the young journalist freedom.