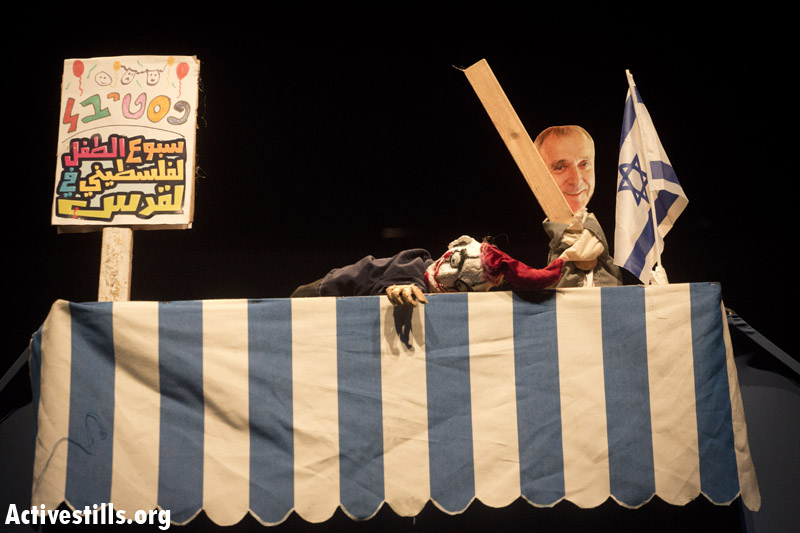 Actors and activists organized a night of performances in Jaffa, in solidarity with el-Hakawati Theater, July 20, 2013. Photo by: Oren Ziv/Activestills.org

An Israeli audience filled the 200-seat theater at Mahsan 2 at Jaffa Port yesterday, with dozens of attendees standing in the side and rear wings of the theater, for a night of entertainment in solidarity with the Palestinian National Theater el-Hakawati and its executive director Mohammad Halayka.

The protest event was organized by a group of five Israeli and Palestinian activists and actors. Mahsan 2 donated the venue space for the evening and sound, lighting and stage technicians volunteered their time for the event.

Approximately 30 performers and speakers, including famous Israeli and Palestinian musicians, actors, activists and Knesset members got on stage to mobilize support for el-Hakawati and express their solidarity and belief that cancelling the theater’s annual children’s puppet festival was wrong. ASSITEJ – The International Association of Theater for Children and Young People – also sent a message of support.

Last month, the Israeli Public Security Ministry ordered el-Hakawati’s weeklong children’s festival at the East Jerusalem theater closed, alleging the organizers took funding from the Palestinian Authority in violation of the Oslo Accords. Halayka said the festival did not receive funding from the PA.

“We worked hard to do something good for children,” Halayka said, speaking in English to the Israeli audience. The idea was to offer Palestinian children, who have few opportunities to experience culture and entertainment in East Jerusalem, one week of the year, between the school year ending and the start of Ramadan, to have some fun.

But Halayka said the cancellation of the children’s festival was just another example of the marginalization Palestinians living in East Jerusalem face.

They pay Jerusalem municipality taxes, but the 370,000 Palestinian residents don’t enjoy the benefits of taxes paid, culturally or in services, Halayka said. 85 percent of Palestinian children in East Jerusalem live in poverty.

“This issue really touched a sensitive chord,” said Anat Matar, one of the event organizers. “It touches something much bigger than el-Hakawati.”

Still, Matar said because the cancellation of the children’s festival was something concrete, related to the arts, and meant for children (rather than a general protest against the occupation or separation wall), it was easier to rally support from the Israeli left.

Actress and event organizer Einat Weizman, who also spoke on stage, said artists must be involved.

Four actors from the Ruth Kanner Theatre Group, which cancelled a children’s show performance this month in solidarity with el-Hakawati, did a theatrical performance based on Manfred Franke’s story about Kristallnacht “Cases of Murder.”

Actress Adi Meirovitch said the decision to cancel their first performance in Tel Aviv was something Ruth Kanner and the actors decided they must do. “Otherwise people won’t listen,” she said. 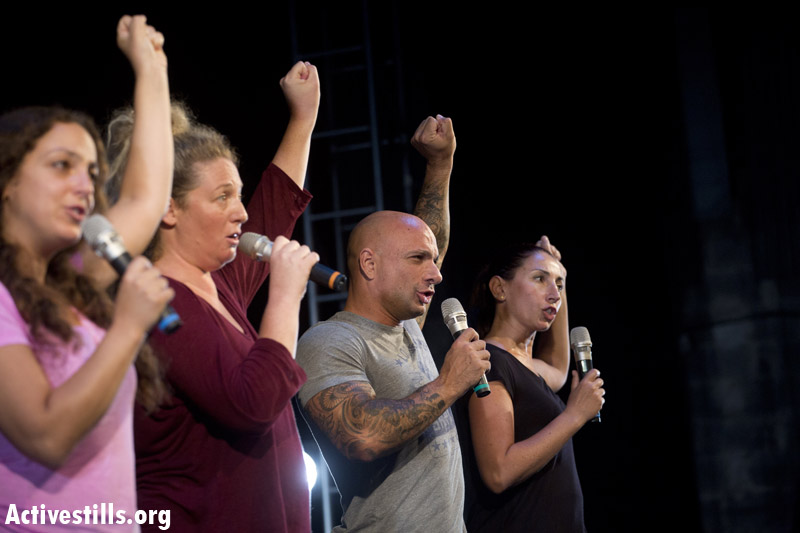 Actors from the Ruth Kanner Theater Group perform at Mahsan 2 in Jaffa at a solidarity event, July 20, 2013. Photo by: Oren Ziv/Activestills.org

Journalist Gideon Levy, speaking to the audience, said people like Public Security Minister Yitzhak Aharonovitch should be ostracized, and that it would be sensible for Israeli artists to refuse to perform for people like him.

Zahalka recalled one of the major disappointments of his youth, when as a fourth grade student in 1965 his teacher asked him to obtain travel permits for his class to go on a field trip from the military governor. After waiting in the sun for three hours, he was told that he needed to request the permits two months before the trip, not two weeks. Zahakla said this showed the nature of racism on both sides of the Green Line.

MK Horowitz said Israelis must resist such acts as the closing down of a children’s festival because they’re wrong, and because it is things like this that make Israel look bad in the world.

Controversy briefly erupted in the audience halfway through the evening, as Sinai Peter, chairman of the Israeli Theater Directors’ Association, called for Israeli artists to bring their political agendas on stage, and for Palestinians to lift the boycott on the Israeli theater establishment. Half the crowd cheered Peter, while the other half clapped in support when a BDS activist shouted at him from the crowd that the boycott is an important and legitimate tool in the struggle against Apartheid. 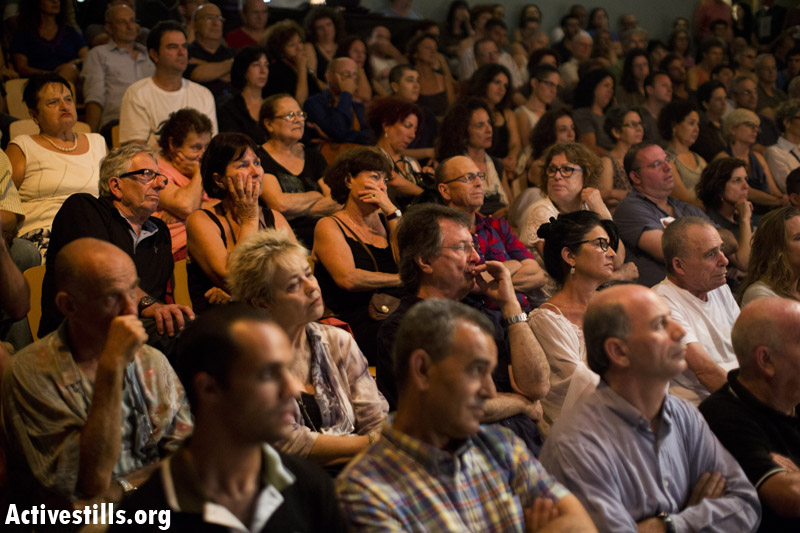 A largely Israeli audience watches performances in Jaffa at an event organized in solidarity with el-Hakawati Theater in East Jerusalem, July 20, 2013. Photo by: Oren Ziv/Activestills.org

Ariel Doron, a puppeteer who helped launch an online photo campaign and made a puppet protest video to raise awareness about the cancelled children’s festival, gave the night’s final performance, a Punch-and-Judy-style puppet show, featuring a puppet with an image of Aharonovitch’s face beating up another puppet for trying to set up a sign in Arabic inviting children to a festival.

While Doron said he doesn’t think one solidarity event will change much, the series of campaigns against the Israeli government’s decision may add up and cause people to take notice. “It doesn’t change the reality for the children of East Jerusalem until they have their puppet show,” Doron said. “Until they get to live a normal life, we still have work to do.”

Matar wasn’t hopeful that this year’s children’s festival at el-Hakawati would be allowed, but said the public outcry might ensure the festival happens next year. “We cannot let this particular event go down the drain,” she said.

Halayka said el-Hakawati is not planning a legal challenge right now, although human rights organization, including B’Tselem and Al-Haq, have offered their legal support.

Halayka said he hopes to raise money to reorganize the children’s festival for this August, after Ramadan, even if the event is smaller than originally planned.

(Haggai Matar contributed to this report)