Addameer director Sahar Francis talks about the pervasiveness of incarceration in Palestinian society, how she and her organization have been targeted by Israeli forces for their work, and what it means if the international community can’t hold Israel accountable for the occupation. 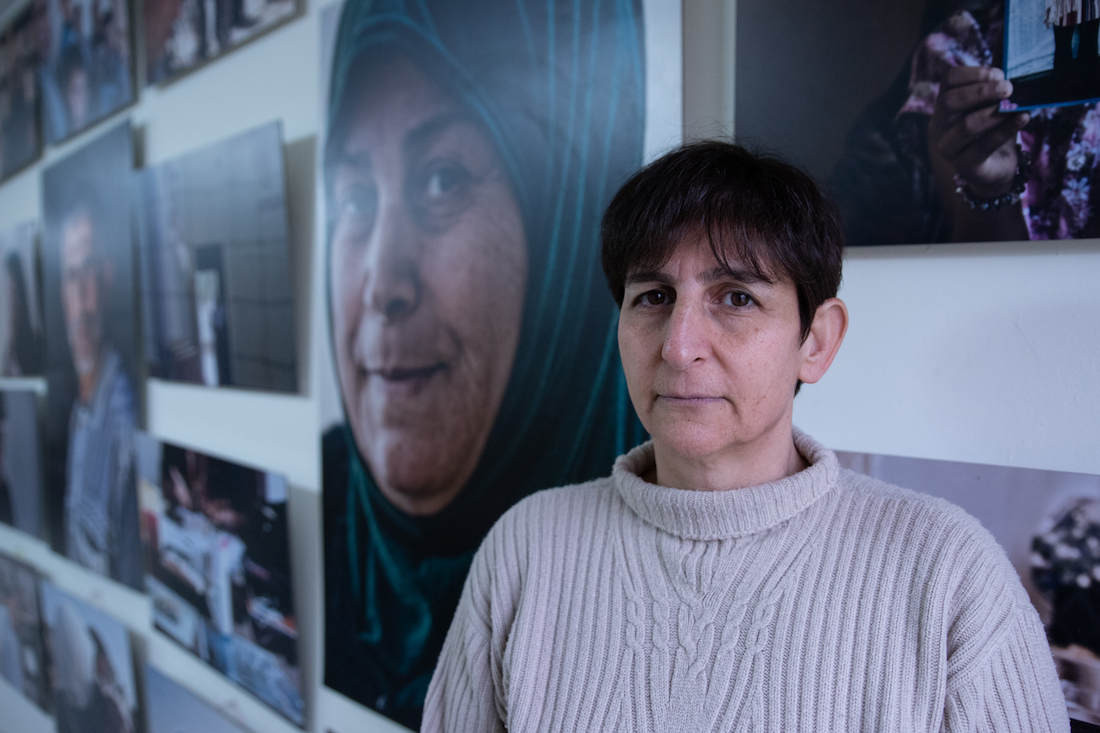 There is one legal case Sahar Francis says she’ll never forget. It was 1996 or 1997, and she had only recently started working at Addammeer, the main Palestinian organization providing legal support to political prisoners. Israeli soldiers had arrested a young Palestinian woman, Francis recalls, and were torturing her to get her to testify against her brother who was also in custody. She was representing both siblings.

After two months being held at Israel’s “Russian Compound” interrogation facility in Jerusalem, the young woman was scheduled to have a hearing at an Israeli military court near Hebron. That day, however, the road was completely blocked by burning tires. The driver didn’t want to continue, Francis recalls, but says she refused to get out the taxi and insisted he find a way to get her to the military court. He did.

“I had to make sure she was going home with me,” Francis explains, sitting behind her desk at the Addameer offices in Ramallah. The way Francis saw it, this woman was suffering a great injustice and she was determined to see her released – which she was. “To me, this was my time to rise to the challenge. Otherwise, what’s the point?”

Israel has arrested and detained more than 800,000 Palestinians since it occupied the West Bank, Gaza, and East Jerusalem in 1967. In 2018 alone, the Israeli army arrested at least 6,500 Palestinians, of whom 1,080 were children. It’s this pervasiveness of incarceration that makes prisoners’ affairs so central in Palestinian society. “It touches every Palestinian home,” says Francis.

The general perception in Israel and around the world is that Palestinian prisoners are those who have carried out violent attacks, perhaps hurled stones or threw Molotov cocktails at Israeli soldiers, stabbed officers at checkpoints, or rammed a car into pedestrians. In practice, even a poem by an obscure poet could be interpreted as incitement to terrorism.

“If you look at the politics of arrests, since the First Intifada until today, all groups in Palestinian society have been systematically targeted,” says Francis. “It’s enough for you to share a photo of a shahid on your personal Facebook page to warrant your arrest for a year, a year and a half, even two years, on the basis of incitement.”

That Addameer defends and advocates for Palestinian prisoners has made it a target over the years, both by right-wing pro-Israel organizations like NGO Monitor, but also by the Israeli government and its armed forces. Israeli forces raided Addameer’s offices in 1998, 2002, and 2012, destroying equipment, rummaging through documents, and arresting its employees.

It was after the 1998 raids that Addameer, which had been established in 1992 in Jerusalem and had been registered as an organization in Israel, moved its operation to Ramallah. 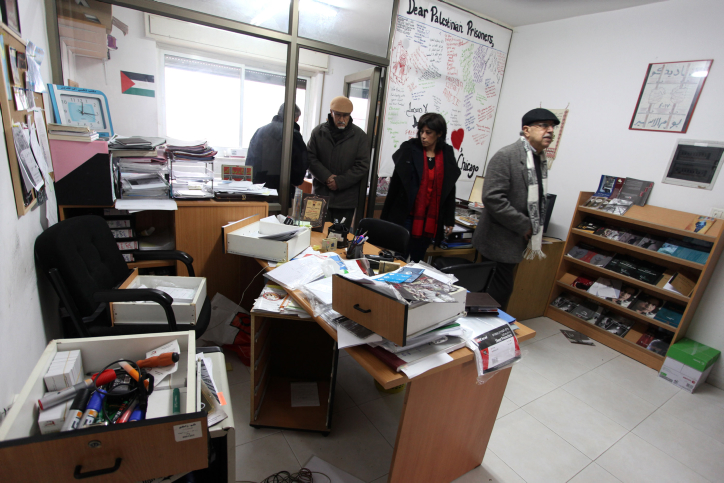 Palestinian employees at Addameer offices in the West Bank city of Ramallah, on December 11, 2012, after Israeli forces raided their office overnight. (Photo by Issam Rimawi/Flash90)

Israeli and international human rights organizations have also found themselves under political attack over the past decade but the same hostile environment carries vastly different consequences for Palestinians under occupation. Half of Addameer’s staff can’t travel outside the West Bank, explains Francis. Their movement is restricted by the occupation’s physical and bureaucratic infrastructure that determines which areas they are authorized to commute through, requires them to apply for travel permits, and subjects them to hours-long waits crossing checkpoints.

Members of Palestinian human rights groups are also more likely to be subjected to arrests than Israeli or international human rights advocates, she remarks. Those arrests often result in long periods of administrative detention — imprisonment without charge or trial. Khalida Jarrar, a former director of Addameer and an elected Palestinian parliamentarian, has been imprisoned by Israel without trial for more than two years. Addameer’s legal coordinator, Ayman Nasser, has been detained by Israel since last September.

In 2002, even Francis was accused by Israeli authorities of helping a prisoner conceal information and faced a six-year prison sentence. For attorneys defending Palestinian political prisoners, “confidentiality is nonsense,” she says, that their every move and word is surveilled by Israeli authorities. As far as she is concerned, Israeli authorities charged her not because they genuinely suspected she was guilty of a crime, but to sabotage her work: during the trial, she was prevented from visiting prisoners.

Francis was ultimately acquitted, but the saga highlighted the importance of the emotional support she and other attorneys provide to prisoners: “to reinforce the person’s steadfastness in face of humiliation. Not only steadfastness in the sense of confessing or not, but in preventing the collapse of a person’s mind and soul.” Israel systematically denies Palestinian prisoners their family visits; by keeping them from their lawyers, too, it attempts to “break” them.

Just serving as a bridge between the prisoner and the outside world, having normal conversations and lifting prisoners’ spirits, Francis believes, can be as important as the legal work. She recalls visiting a prisoner at the Russian Compound who hadn’t been allowed to change clothes for 60 days. “He truly smelled awful. He was embarrassed for having to share the visitors’ cell with me, which is barely one meter by one meter,” she says. “This is how you engage in the full humiliation of detainees. This is the mental and psychological torture [Israeli forces] are after.” 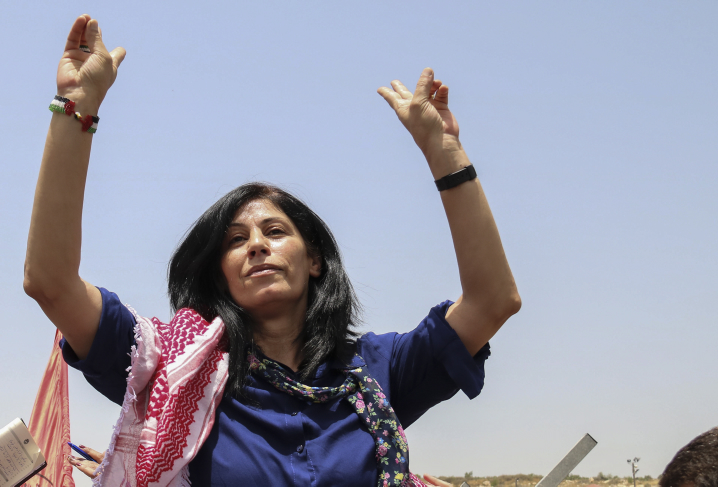 Palestinian lawmaker Khalida Jarrar after her release from an Israeli prison, at Jabara checkpoint near the West Bank town of Tulkarem, June 3, 2016. (Photo by Haytham Shtayeh/Flash90)

Born in Fasuta, a small village in the Galilee, Francis says her interest in human rights was sparked by reading books on the civil rights movement in the United States and on apartheid in South Africa.

After studying law at the University of Haifa, she began working at the Bethlehem office of the Society of St. Yves, a Jerusalem-based human rights organization. Just a couple of years later, in 1996, she became acquainted with arbitrary and political arrests from up close, when Israel rounded up friends and colleagues following protests against a new tunnel at the Western Wall in Jerusalem.

In 2012, when she became director of Addameer, Francis resettled in Ramallah. Her very movement across Israel-Palestine over time – from Fasuta, to Haifa, to Bethlehem and Jerusalem, then Ramallah – can be seen as a rare challenge of the occupation. By living and working among various, separate Palestinian communities, she defies the physical and political divisions Israel uses to control Palestinians.

“As a person who used to live in ’48 all her life, my knowledge of the details of the occupation, the violations and the systematic crimes committed by the occupation, weren’t very clear to me,” says Francis, referring to the area inside the Green Line. “At some point, I felt that maybe the opportunities that we are exposed to in ’48 should be used to serve communities among our people that don’t have access to them.”

Human rights and the legal system in general, she believes, are constrained in the absence of political will. “Change doesn’t come from the courthouses alone or from the corridors of justice,” she remarks. There is no way to enforce human rights without a political decision to back it up, she adds, and one case that demonstrates how politics can fill that void is the pressure applied both by and about hunger-striking administrative detainees.

One of the achievements Francis is proudest of is supporting Khader Adnan during his 2012 hunger strike. The Israeli army arrested Adnan in early the morning hours of Dec. 17, 2011, and he went on a hunger strike almost immediately to protest his conditions and the fact that he wasn’t being charged with a crime.

Addmeer accompanied him throughout his case, which got unusual global media coverage, particularly as the hunger strike went on and his health deteriorated. Eventually, European countries and others began to put pressure on Israel (only “on his 60th day of striking, with his life in danger,” she adds), and Adnan was released. “That gave us a push to keep going,” she says. 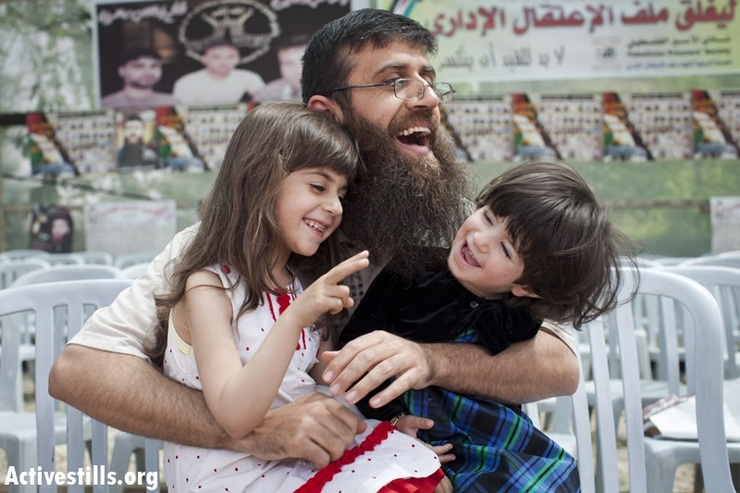 Khader Adnan plays with his daughters on his first day out of Israeli jail in the West Bank village of Araba, near Jenin, April 18, 2012. Adnan protested his imprisonment and was on hunger strike for 67 days. (Photo by: Oren Ziv/ Activestills.org)

But despite a few cases where foreign countries have used their leverage, Francis is skeptical of the international community’s ability to defend Palestinian rights. “There is an obvious double standard,” she remarks. Instead, her hope for change comes from the grassroots level. The boycott, divestment and sanctions (BDS) movement has made people feel that change is within their reach, she says, and that “small actions against companies that are complicit in the occupation, or against institutions and universities that profit from it, are leading to results.”

In 2014, Addameer joined forces with a number of organizations to launch an international campaign against G4S, a security company that was staffing Israeli prisons in the occupied territories and providing surveillance technologies that target Palestinian political prisoners. G4S, it turned out, also ran immigrant detention centers in Britain and prisons in South Africa that relied on torture. The company also used similar surveillance technologies along the U.S.-Mexico border.

This linking of struggles mobilized people who were justice oriented but who wouldn’t have necessarily taken a stand on Palestinian rights alone. “We became a force of more than 160 organizations around the world. Within two years, we succeeded, and G4S announced that it was withdrawing from contracts with [Israeli] prisons, settlements, and checkpoints. That’s a clear example of how, when you try to link your struggle with other struggles, you come out stronger.”

“The Palestinian resistance movement has always looked for connections to other popular struggles. Today, these connections are again the source of solidarity and engagement,” says Francis. “That young Palestinians who weren’t even around during the First Intifada understand the importance of linking detentions in Palestine with political arrests in the United States, Latin America, Turkey, Spain, and other places, is a positive development.”

Alongside the grassroots level, however, the next frontier, Francis remarks, is to trying hold Israel accountable for alleged war crimes, “to reach a point where there is a real investigation of the crimes the occupation has committed throughout all these years, and that they are paying a price for them.” By pay, she means both materially and symbolically; Israel should compensate Palestinians, acknowledge its wrongdoings dating back to the Nakba, and individuals who are found to be complicit should be imprisoned.

“Palestine is the test case for international law, as far as I’m concerned. If Palestine isn’t addressed at that level, then the international community should just admit its failure to protect human rights,” says Francis.