Minutes before his appeal to the Supreme Court regarding his expulsion order from Jerusalem was scheduled to be discussed this morning, Adnan Gheith’s lawyer Rami Othman announced to journalists and supporters outside the courtroom that he had decided to withdraw the appeal, thereby conceding to his four-month expulsion. 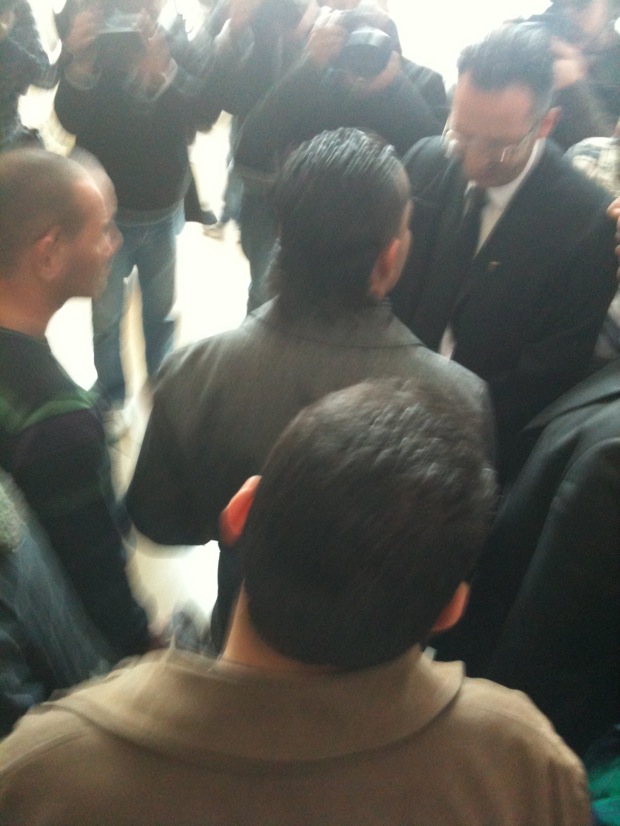 Adnan Gheith and his lawyer speaking to press outside the courtroom today. (Photo: Mairav Zonszein)

The decision, according to his lawyer, stems from the fact that Adnan was convinced he would lose the appeal, among other things, because Israel’s General Security Service was expected to submit classified documents that he would not be able to view and therefore not be able to refute – effectively barring him from due process in making a case in his defense. Furthermore, he argued, the legal proceedings would constitute recognition of the court’s authority and would set a legal precedent for more Palestinians like him to be expelled on the same grounds.  Rumors have been going around that the GSS has composed a list of a few hundred Palestinian residents in East Jerusalem to be targeted for similar expulsion orders.

The rationale behind the decision can be understood as protest of Israel’s government and its related authorities, including the Supreme Court, which all take part in the continued occupation of the Palestinian population.  The decision also reflects a long-term approach that sees beyond this specific case and seeks to define the terms by which resistance to the occupation should be conducted. This is similar to Jonathan Pollack’s refusal to accept the Tel Aviv Magistrate’s Court offer of community service in exchange for a prison sentence, citing that he would not, out of principal, cooperate with the court’s ruling.

Israeli and Palestinian supporters who were waiting outside the courtroom for his case to be called up were surprised and dismayed at the decision, as they had hoped he would fight it in court. Adnan and friends outside the courtroom following his announcement. (Photo: Mairav Zonszein)

His lawyers reached a deal with the court granting him two more weeks to find alternative housing, and as far as I understand, as a resident of Israel, Adnan is barred from the municipal boundaries of Jerusalem, but can technically relocate anywhere inside Israel, even Tel Aviv if he so pleases. The question beckons: If Adnan presents such an urgent national security threat, how is it possible that the state would allow him to roam the streets of Tel Aviv freely?