Tel Aviv, 27 December 2010. On the day that marks the second anniversary of Israel’s three-week war on Gaza, also known as Operation Cast Lead, an Israeli activist was sentenced to three months in jail for protesting Israel’s military blockade and siege on the Palestinian territory.

Jonathan Pollak, a political activist who is involved in the Popular Struggle Coordination Committee (PSCC), participated in a Critical Mass bicycling event to protest Israel’s blockade of Gaza, which was then more than three years old. The event took place on January 31, 2008. Police arrested Pollak at the demonstration, accusing him of incitement and of being the leader of the event. In effect, they arrested him for riding a bicycle in Tel Aviv.

The PSCC is a grassroots movement that organizes unarmed activism against Israel’s military occupation of the Palestinian territories in the West Bank and Gaza. Jonathan Pollak is one of the best-known activists against Israel’s security barrier, participating weekly in the demonstrations that take place in Palestinian villages in the West Bank. For details and background about the arrest and sentencing of Jonathan Pollak, please see Joseph Dana’s post.

Below is the speech that Jonathan Pollak read in front of the court today. 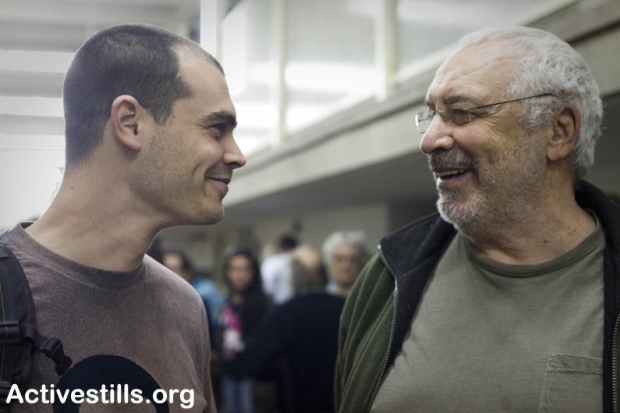 Jonathan Pollak at court, speaking with his father (photo: activestills.org)

Your Honor, once found guilty, it is then customary for the accused to ask the court for leniency, and express remorse for having committed the offense. However, I find myself unable to do so. From its very beginning, this trial contained practically no disagreements over the facts. As the indictment states, I indeed rode my bicycle, alongside others, through the streets of Tel Aviv, to protest the siege on Gaza. And indeed, while riding our bicycles, which are legal vehicles belonging on the road, we may have slightly slowed down traffic. The sole and trivial disagreement in this entire case revolves around testimonies heard from police detectives, who claimed I played a leading  role throughout the protest bicycle ride, something I, as well as the rest of the Defense witnesses, deny.

As said earlier, it is customary at this point of the proceedings to sound remorseful, and I would indeed like to voice my regrets regarding one particular aspect of that day’s events: if there is remorse in my heart, it is that, just as I argued during the trial, I did not play a prominent role in the protest that day, and thus did not fulfill my duty to do everything within my power to change the unbearable situation of Gaza’s inhabitants, and bring to an end Israel’s control over the Palestinians.

His Honor has stated during the court case, and will most likely state again in the future, that a trial is not a matter of politics, but of law. To this I reply that there is hardly anything to this trial except political disagreement. This Court may have impeded the mounting of an appropriate defense when it refused to hear arguments regarding political selectiveness in the Police’s conduct, but even from the testimonies which were admitted, it became clear such a selectiveness exists.

The subject of my alleged offense, as well as the motivation behind it were political. This is something that cannot be sidestepped. The State of Israel maintains an illegitimate, inhuman and illegal siege on the Gaza Strip, which still is occupied territory according to international law. This siege, carried out in my name and in yours as well, sir, in fact in all of our names, is a cruel collective punishment inflicted on ordinary citizens, residents of the Gaza strip, subjects-without-rights under Israeli occupation.

In the face of this reality, and as a stance against it, we chose on January 31, 2008, to exercise the freedom of speech afforded to Jewish citizens of Israel. However, it appears that here in our one-of-many-faux-democracies in the Middle East, even this freedom is no longer freely granted, even to society’s privileged sons.

I am not surprised by the Court’s decision to convict me despite having no doubt in my mind that our actions on that day correspond to the most basic, elementary definitions of a person’s right to protest.

Indeed, as the Prosecution pointed out, a suspended prison sentence hung over my head at the time of the bicycle protest, having been convicted before under an identical article of law. And, although I still maintain I did not commit any offense whatsoever, I was aware of the possibility that under Israeli justice, my suspended sentence would be imposed.

I must add that, if His Honor decides to go ahead and impose my suspended prison sentence, I will go to prison wholeheartedly and with my head held high. It will be the justice system itself, I believe, that will need to lower its eyes in the face of the suffering inflicted on Gaza’s inhabitants, just like it lowers its eyes and averts its vision each and every day when faced with the realities of the occupation.