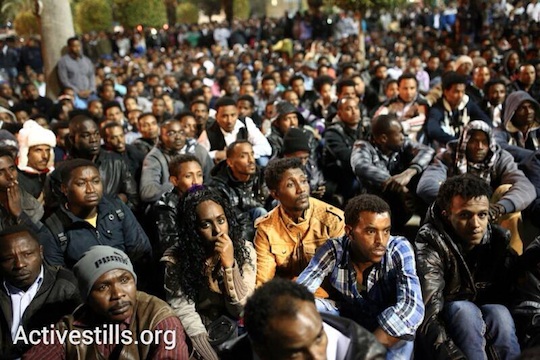 Their central demands are an end to the practice of indefinitely detaining asylum seekers and that Israel individually examine their requests for asylum and refugee status.

Currently Israel does not examine the asylum claims of Sudanese and Eritreans in the country – either individually or otherwise. Those two groups are given papers that prevent their deportation but do not allow them to work or otherwise sustain themselves.

The strike, which was set to begin Sunday morning, will involve protest marches, demonstrations in front of various foreign embassies and protests in central Tel Aviv.

Restaurants, bars and cafes in Tel Aviv generally employ Eritrean and Sudanese asylum seekers as dishwashers and kitchen staff. Because they have no work permits, they are often paid less than minimum wage and face labor exploitation in various ways.

At least one restaurant in Tel Aviv, whose dishwashers and kitchen staff are Eritrean, announced that it will not open its doors Sunday morning and encouraged its employees to join the protest march.

The strike comes just weeks after a new law came into effect that authorizes the indefinite detention of asylum seekers in an ‘open prison’ facility. Israel’s High Court struck down a previous version of the law as unconstitutional.

Within days of arriving, the first group of asylum seekers brought to the new ‘open prison’ facility carried out a series of mass acts of civil disobedience.

One group marched two days to snowy Jerusalem before being arrested en masse outside the Knesset. A second group was arrested while marching through the desert. In the days after, a number of protests took place in Tel Aviv.

In the weeks since, immigration authorities have been conducting random arrest sweeps of asylum seekers without valid documents in south Tel Aviv. Those with valid “conditional release” visas are being issued orders to appear at the new ‘open prison’ facility when trying to renew their visas at the Interior Ministry.

Related:
Turning Israel into a ‘state of all its infiltrators’
Asylum seekers claim their place on the Israeli political map