The apartment of an Eritrean couple in Jerusalem went up in flames last night, in what looks like another arson attack. Haaretz reports that at around 3 a.m., the man and the woman, who is seven months pregnant, awoke and tried to stamp out the fire with their feet. There are times when events are so horrible, it’s hard to find any words and easy to feel paralyzed with misery.

The Hebrew Haaretz story adds that the 32-year old man suffered second-degree burns over 20 percent of his body. And because of the woman’s advanced pregnancy, both will be kept in the hospital for some time. Given recent stories about the high rate of infections in Israeli hospitals, this puts their fetus at risk. If, god forbid, anything happens, will the perpetrators be charged with that crime too? That is, if they are ever found? 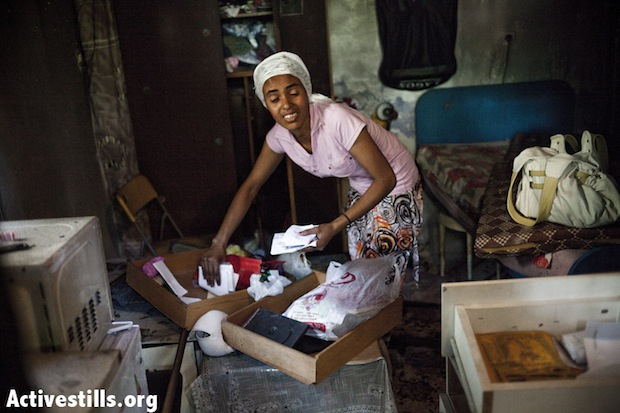 A friend of the inhabitants of a house collects personal belongings hours after the house was set on fire Thursday morning in the Nahlaot quarter of Jerusalem, Israel (photo: JC / Activestills)

Does anyone know what a second-degree burn feels like? Around this time of year nearly 30 years ago, I was standing on the grass near a spot where there had been a bonfire for the 4the of July the previous night, with my back to the pit. I took a false step, lost my balance and fell backwards, breaking the fall by thrusting my left hand straight into the coals.

My palm began to bubble within seconds. Pain on a level that is hard to describe seared through my entire hand and crawled up my arm. The heat and horror were so intense that I felt sick to my stomach. Someone plunged my hand in a pot of ice water and I was able to calm down, but hours later, just taking my hand out of the ice-bath made my whole body shake, until finally, late that night, I was taken to emergency and pumped full of painkillers. Even then the pain was still there – I just didn’t care anymore. And that was just the palm.

A few weeks ago, following riots against the migrants in South Tel Aviv, the commentary included data battles about the crime rate among the African migrants, and how it compares to the Israeli population. Hardly anyone mentioned the rise in violent crimes by Israelis against the Africans. The numbers are rising, and the types of crimes are diversifying. They now include repeated attempts to burn people alive and mob attacks on property, in addition to what I wrote in an earlier post:

“a large portion of each [2010 and 2011 reports by the Knesset’s Research and Information Division] is devoted to the crimes of Israeli society against the migrants, including stabbing, firebombing, sexual exploitation and trafficking, and widespread violations of labor rights.”

Here are my predictions: the attackers will not be found. The government will make a show of ongoing deportations that continued just yesterday – in effect, blaming the victims. No policy will be drawn up or enacted that will ease the suffering of the refugees/asylum seekers and migrants, or to provide relief to the Israeli residents of the neighborhoods where the Africans are concentrated. The situation is just too convenient a distraction from the other problems that the Israeli government doesn’t truly want to solve. 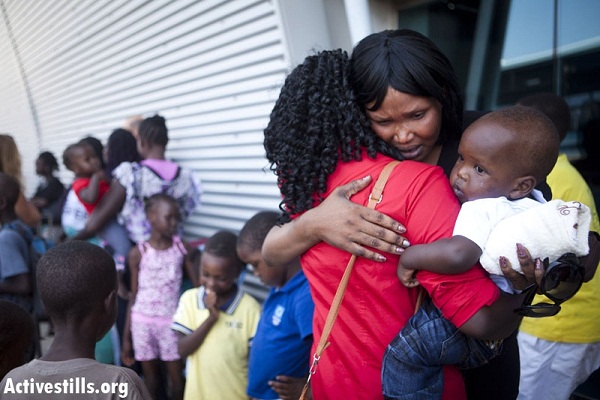