Khalida Jarrar, a Palestinian parliamentarian known for her human rights activism, has been imprisoned indefinitely and without charges since July 2017. 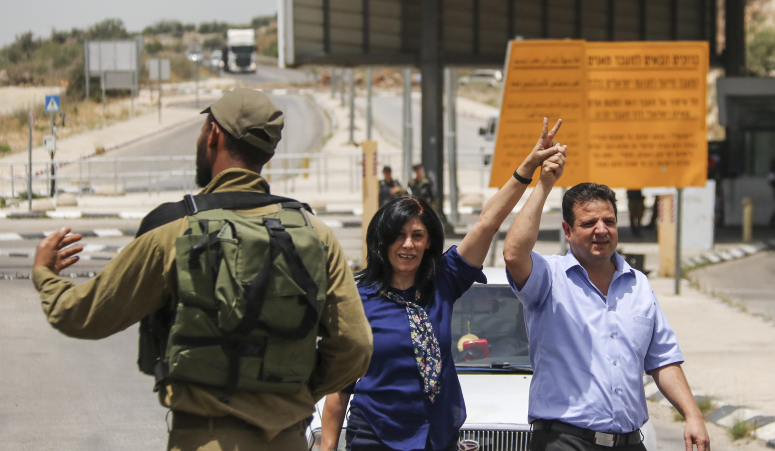 Palestinian lawmaker member Khalida Jarrar (PFLP) who was imprisoned by Israel alongside Joint List head Ayman Odeh upon her release from an Israeli prison. Jabara checkpoint near the West Bank town of Tulkarem, June 3, 2016. (Haytham Shtayeh/Flash90)

The Israeli army extended the administrative detention of feminist Palestinian lawmaker Khalida Jarrar by four months on Sunday, following her arrest in July 2017. Her detention was last extended for the first time last December, after the army determined that the parliamentarian and human rights activist continued to pose a risk.

This is not the first time Israel has put Jarrar under administrative detention, a practice in which detainees are held indefinitely without charge or trial — and with out any way to defend themselves — on the basis of secret evidence. Such orders can be renewed indefinitely for up to six months at a time. They can also be used to extend the jail time of someone who has finished serving their sentence.

Jarrar was first arrested in April 2015 and placed under administrative detention for six months, after she refused to follow an internal expulsion order demanding she move to Jericho within 24 hours for a period of 1.5 years. Following her arrest, Jarrar was placed under administrative detention and accused of being a member of the Popular Front for the Liberation of Palestine (PFLP) — a party she represents in the Palestinian Legislative Council (PLC) — and which is outlawed by Israel.

Her detention led to a worldwide campaign advocating for her release. She was eventually released from administrative detention and put on trial, where she faced 12 charges, the majority of which involved her parliamentary work and activism: including her association with the PFLP, participation in protests, giving speeches and interviews to the media, a visit to a solidarity tent for Palestinian prisoners, and incitement to kidnap Israeli soldiers. In December 2015, Jarrar was sentenced to 15 months in prison as part of a plea bargain.

She was released in June 2016, only to be re-arrested a year later in July 2017. She has been in detention ever since.