Marches and protests have been planned in Tel Aviv, as well as outside Israeli consulates and embassies and UN offices in major cities throughout North America and Europe. Letters will be delivered to Israeli ambassadors and UNHCR officials demanding Israel ceases its policy of imprisonment and recognize the community as refugees, and calling on the UN refugee agency to take immediate responsibility.

The asylum seeker community, which numbers around 53,000 in Israel, is now in its fifth week of mass, popular protests to call attention to its plight as refugees, which began with marches from the Holot detention center and culminated in an unprecedented rally in Rabin Square. Although initially the community declared a general strike, they were forced to end it due to financial hardship. They also suspended protests for several days after former Israeli Prime Minister Ariel Sharon died on January 11. 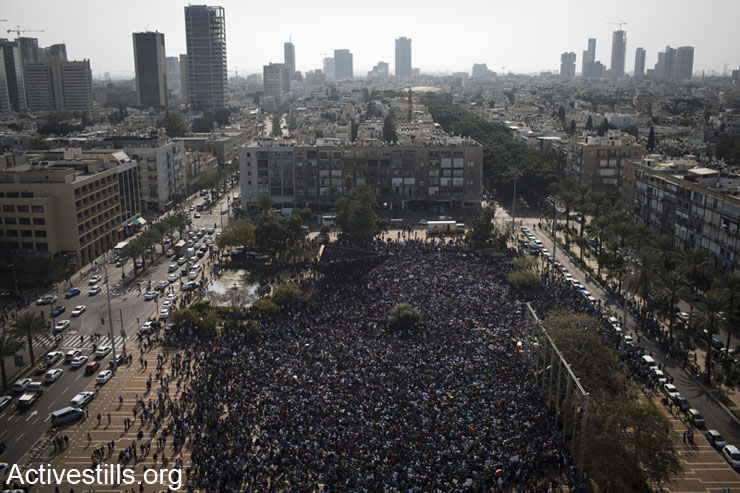 More than 30,000 thousands African asylum seekers participate in a protest calling to free all African refugees imprisoned in Israeli prisons and detention centers and calling for the recognition of all refugees rights, Tel Aviv, Israel, on January 5, 2014. The protest was the first event in a 3-day general strike of African asylum seekers in Israel, and is the biggest African refugees protest in Israel’s history. (photo: Activestills.org)

According to a report in Haaretz, Israel has not granted refugee status to a single Eritrean or Sudanese national, as opposed to European countries, which have granted it to over 70 percent of asylum seekers from those two countries. The report also noted that out of 1,800 asylum requests made by Eritrean and Sudanese nationals so far, only about 250 have been examined, of which about 155 were rejected. Israel is not deporting them back to their countries, but is making it clear they do not want them to stay either.

In December, a week after the new Holot “open detention” facility opened in Israel’s Negev Desert, approximately 150 Sudanese asylum seekers transferred there from Saharonim prison refused to check in to their nightly roll call and began marching to Jerusalem in an act of civil disobedience. The act sparked a nationwide protest. On January 9, the same group that was forcefully taken back to Saharonim, began a hunger strike in prison. Over the last few weeks, authorities have increased detentions, rounding up men on the streets to take to the detention center, even those with families, despite the fact that authorities have undertaken not to detain men with wives and children.

Although African asylum seekers currently in Israel are protesting the problematic Israeli government policy they are faced with daily, their struggle is an international one. Israel has become a major stage from which they are organizing and trying to make their voices heard, in an effort to realize their basic human rights. But their grievances are not just with Israel. They are trying to get the world’s attention to a global problem.

From a statement by the asylum seeker community’s Facebook page about their struggle:

While in many other countries we would be acknowledged as refugees, the government of Israel has refused to determine our refugee status in any systematic or transparent manner through a fair and efficient Refugee Status Determination (RSD) process that allows us to have our claims individually heard. Instead, it has chosen a policy of imprisonment and incitement against us. This is the story of our self- organized refugee movement and struggle for freedom, human rights, and recognition as refugees in Israel.

Their list of demands from the government of Israel:

1. Cancel the new amendment to the Prevention of Infiltration Law; stop all arrests; and release all asylum seekers and refugees from prisons.
2. Start respecting the rights of refugees, including social rights, health and welfare benefits.
3. Check individual asylum claims in a fair and transparent way.

Their demands from the United Nations High Commission on Refugees (UNHCR):

1. Hold Israel accountable to adhere to the refugee commission.
2. Monitor our asylum request process from start to finish, in a transparent and fair way adhering to international standards.